Roy Keane is held up as the defining defensive midfielder of the first half of the Premier League era. Glowering his way across the turfs of the 90s and 00s, putting the boot in while cajoling maximum effort out of his teammates. Keane is remembered as football’s ultimate Sergeant Major, leading his team vociferously into war each week. And make no mistake, when Keane was on the pitch, it was war.

As appropriate this description is, it also does Roy Keane a disservice as a player. Nowadays, midfield roles are clearly and definitively siphoned off into a defensive, or ‘holding’, role and an attacking role. The Republic Of Ireland international was never strictly a defensive player. Playing at a time when 4-4-2 was still en vogue for English clubs, his responsibilities were far more box-to-box than is remembered.

A vastly underrated passer of the ball, Keane was vital in making Manchester United tick. When paired with Scholes, a player with natural marauding instincts in forward areas, Keane was routinely tasked with supplying the ball from deep, or carrying it forward to feed the attack. The former Nottingham Forest man registered 33 Premier League assists, and his role in build-up play was vital. Whether spreading play to the wings for a Ryan Giggs run or a David Beckham cross, or playing centrally to a wealth of forwards from Eric Cantona to Wayne Rooney, Keane could do it all.

He also carried a goal threat, netting 51 goals over the course of 480 United games. Many of them shattered the illusion of Keane as a pure defensive midfield hardman. There was a superbly-taken long-ranger in the record-breaking 9-0 win over Ipswich. A beautiful piece of back-post control and a half-volley against Newcastle United. A sublime touch and a striker’s finish in the 6-1 win over Arsenal. Make no mistake, Roy Keane could really play. 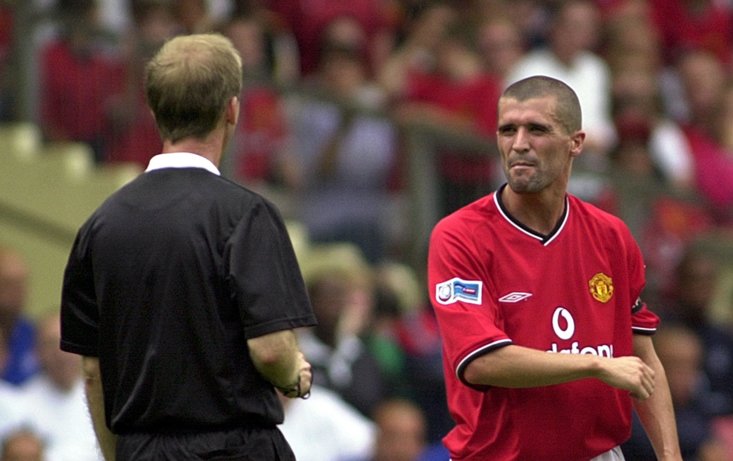 Outside of the Premier League, he delivered one of the most lionised United performances ever, in the second leg of the 1999 Champions League semi-final. The Red Devils had drawn 1-1 with Juventus at home, thrown a lifeline by an injury-time equaliser from Ryan Giggs. Juventus went 2-0 up in the second leg, at Stadio delle Alpi. Keane led the fight-back, scoring the next goal. He was booked for a desperate lunge on Zinedine Zidane, meaning he would be suspended for the potential final that lay ahead. This devastating fact only seemed to spur Keane on, as he put on the perfect midfield display to drag United into the final with a 3-2 win.

However, his reputation as a snarling midfield enforcer is also a well-earned one. His running battle with Patrick Vieira throughout the peak of the United-Arsenal rivalry was mesmerising to watch. Two world class footballers dropping the pretense and clashing like prizefighters who have just shed their gloves for an unsanctioned 13th round. There was the sending-off against Newcastle, where nearly the entire team had to restrain Keane from assaulting Alan Shearer. The most unedifying of all came when Keane deliberately injured Alf-Inge Haaland with a crunching tackle as payback for a clash with the Norwegian in an earlier game.

Roy Keane’s inability to control the competitive fire that burned within him ultimately brought his time at Old Trafford to a close. There was no way back for the legendary captain after he criticised a number of his teammates in an MUTV interview. It was the latest in a series of bust-ups with Sir Alex Ferguson, and proved to be the final straw. Keane played for Celtic for six months after leaving, before retiring at the close of the 2005-06 season.

Keane’s furious and dramatic exit should not detract from what he achieved in the Premier League. The arch competitor, he demanded incredibly high-standards from all he played with, and even more exacting standards from himself. The other players Roy Keane beat to make it into this team are excellent, influential defensive midfielders. Keane was all that, and so much more.