Football
Features
The FA Cup loss to Man Utd is just the latest setback for the champions
Kris Voakes
14:00, 25 Jan 2021

The Liverpool manager tried to put a brave face on it at the end but there was no masking the magnitude of the latest defeat for Jurgen Klopp’s side. Their 3-2 FA Cup fourth-round defeat to Manchester United on Sunday was just another setback for the Reds in a month full of them. Sure, they finally scored a couple of goals, but their exit at the hands of their old rivals will still sting.

Perhaps it is the lack of fans and the stale atmosphere in stadiums which is helping to undermine the enormity of some of these games, but let us not make the mistake of thinking that the loss at Old Trafford was a free-hit exercise in getting Liverpool back into a scoring groove. Imagine there being 75,000 at the Theatre of Dreams yesterday, the vast majority of them taking great delight in the Merseysiders’ ills, and then try to claim we shouldn’t be worried about Liverpool.

Previously almost impregnable, Liverpool have now won once in seven games since Christmas, and that sole victory came against Aston Villa’s under-23 squad. Defeats to Southampton and Burnley and draws against Newcastle and Manchester United have burgeoned zero goals and two points in their last four league games. It is a run which has seen them drop from first to fourth in the Premier League and now they are out of the FA Cup.

But Jurgen says fans and pundits shouldn’t be overly concerned. “It’s not what we wanted, so it’s frustrating,” Klopp told the BBC after their cup exit. “We weren’t on our absolute top level, but we made a lot of steps in the right direction. You don’t have to worry about us, as a group we are really together.” 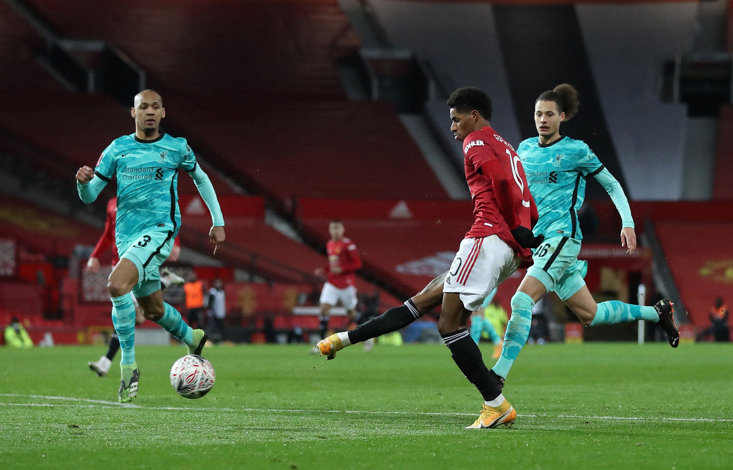 The truth is, though, that we are all worried about Liverpool. If Tottenham and Everton were to take advantage of games in hand then the Reds would drop to sixth on the current ladder, and current form suggests an upturn at Anfield is far from likely. It was their inability to stay with Manchester United’s dynamic running in the final third which was their undoing on Sunday, and the lack of cover at the back is a huge concern. Fabinho and Rhys Williams were the latest to fill in at centre-back, but Marcus Rashford and Mason Greenwood proved too much for them to handle.

With Virgil van Dijk and Joe Gomez out injured and Joel Matip still being treated with kid gloves following his recent spell out, Liverpool plainly need an addition to the back line which has yet to arrive. And with only a week left of the transfer window, time is against the Reds when it comes to making a move.

So far in January we have seen an awful run of form on the field greeted with inactivity in the market, and that apathy over what is a glaring hole in the squad has altered Liverpool’s season completely. And that is why we are all concerned about where this campaign is going to end for Klopp, especially with a trip to Leipzig in the Champions League coming just three weeks from now. It was always going to be a big call to go back-to-back as champions after last season’s success, but at this rate Liverpool are going to be scrambling for a top-four spot and up against it in Europe.

As much as Klopp might try to convince us all otherwise, this is a very worrying moment for the champions. And their Champions League hopes for both this season and next will depend on how they respond in the weeks ahead.