Football
Features
Ever wanted to converse with your heroes in multiple languages? Here's how...
Elliott Bretland
08:00, 24 Apr 2021

This article first appeared in The Sportsman on 25/03/20

“What do you do in the bedroom?”

“I sleep with your wife.”

The life of a football interpreter is certainly interesting. Fortunately for Peter Clark this was just another case of things being ‘lost in translation’ as he taught one of his many students.

“You sleep with my wife?! I don’t think so,” Clark laughs during an interview with The Sportsman as he explains one of the more bizarre interactions he’s had while teaching one of a number of foreign professionals plying their trade in England. “He was a coach, a real character but I noticed every personal pronoun for him was ‘your’. ‘I’ didn’t exist, ‘my’ didn’t exist, ‘his’, ‘her’... everything was ‘your’.”

Over the last 25 years, more and more players from abroad have played in the Premier League while the Champions League has exploded too, meaning translators and interpreters have become vital for communication. While some of the roles involve teaching, the crux of this career is being there at press conferences and interviews, telling the world what the big names are saying. You have to know your stuff.

“The one thing a football interpreter has to be is confident, and you have to know your football inside out,” insists Clark. “If you don't and you’re sat next to Roy Keane or Jurgen Klopp and get caught out you will go under, it will be one of the most embarrassing moments of your life. You'll be caught out in three sentences. If you don’t know what hairdryer treatment means, or  what a holding midfield player is…”

Stefano Mazzoletti, another interpreter for ‘Clark Football Languages’ who is based in Germany but operates all over the continent, says there is big pressure but if you’re prepared and clued up, you’ll be fine.

“There are football terminologies in different languages, you have to understand. I read the different newspapers and learn vocabularies,” he tells The Sportsman. “It’s a different world, its own world. You have to be able to sit up there on stage with coaches and players, talk in front of all these cameras and journalists and you need to be able to deal with pressure.” 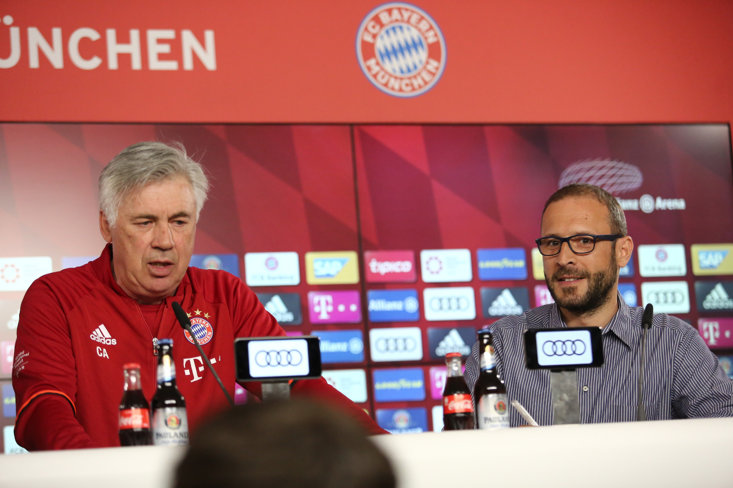 Interpreters at Clark Football Languages have provided assistance in many different forms, whether translating for Celtic icon Shunsuke Nakamura’s wife as she gave birth at a Scottish hospital, or telling Swiss press of Jermain Defoe’s love of EastEnders. So, just how do they do it? Having a pen and paper handy is key for many, though some simply boast astonishing recall.

“Every football interpreter has their own system,” Clark says. “I’ve got an incredible German/Spanish girl who does Leverkusen, Dortmund, Monchengladbach and she sits next to them and remembers it all. How the hell do you do it? ‘I just do,’ she says. I have to write it down in my own shorthand like text chat.  You have to write really fast. One manager will give you time, talking slowly, but the manager at RB Leipzig, Julian Nagelsmann, my God. Lovely bloke, intelligent, a fantastic career ahead of him, but he speaks so fast!”

Mazzoletti reveals that sometimes, you just have to go with it and speak.

“In some stadiums you have a chance to do simultaneous translations,” he adds. “That’s more challenging, you have to talk, write and speak while they talk, so the whole process is different but I prefer to do that because you listen and speak out. I write down the most important things he says and then reveal it. I normally write it in the language to translate into, so when he’s done I repeat what he says. If he is a fast talker, so long as you are prepared and know the history of the last few days of the club then it’s not a problem.

“It helps if they are a foreign coach in the Premier League, that is easier as they are already speaking a second language. But if you have a native speaker, Steven Gerrard for example, he was with Rangers when I translated him at Rapid Vienna, and Brendan Rodgers when he was at Liverpool, they speak quite fast. I listen to interviews of them before, I get used to their style of speaking, the dialect, and then I get most of it.”

It’s a dream gig for a football fan. Mazzoletti has interviewed Barcelona’s Champions League winning stars, including Lionel Messi, as well as five-time Ballon d'Or winner Cristiano Ronaldo, and he’s even hung out with Paolo Maldini. One coach though, was particularly in awe of his translation skills.

“When Pep Guardiola went to Manchester City, I interpreted a few times, including one time in Basel. Because he was able to speak German, I was translating back into other languages he could also understand. Afterwards, he turned to me and said in Spanish, ‘You are a real spectacle.’ It was just fantastic, he is known to criticise some.”

Getting up close and personal with the greats, Mazzoletti admits some dominate the room with real star quality, “Jose Mourinho, he has this aura when he enters a room. He’s humble and a great guy, he plays with the journalist, he focuses all of the attention on himself and not his players.”

Clark, meanwhile, remembers one legend of German football calming him right down during his first ever assignment on the top table. “My very first presser, Bayern v Arsenal in 2001. I sat at the top table with Stefen Effenberg, and Oliver Kahn, at the time he was the best keeper in the world.

“I got nervous and remember being sat in this huge hotel conference room and I couldn’t take the glass of water because my hand was shaking. Effenberg took me to the side and said, ‘Hey, let's just have a laugh, say whatever you need to say. It’s not going to be complicated,’” he explains.

Clark has worked with well over 100 players during nearly a quarter of a century, with a number playing for Chelsea. And it was the former Blues manager Carlo Ancelotti, now Everton boss, who both Clark and Mazzoletti grew close with. While the former worked with the Italian at Stamford Bridge, the latter got to know him through his work with Clark during his time with Bayern Munich.

“He is a lovely, unpretentious, modest, down to earth, quite amusing guy that’s very loyal,” Clark, now a good friend, says fondly. “He knows his football and knows how to get a team gelling. His biggest strength is his man-management, he’ll put his arm around players. Carlo loves languages and he’s extremely good at them. His French was incredible when he moved to PSG. The summer before he moved his French was ok, but then the next thing I know he’s giving press conferences!”

Football has its own unique language and, thanks to the likes of Clark and Mazzoletti, nothing is lost in translation.