Football
Features
A group of Villains are making a noise in Ghana
Simon Lillicrap
16:00, 21 Sep 2020

5,031 miles. That's the exact distance that separates Aston in Birmingham from the Ghanain village of Juaben. Yet these two totally contrasting places share one thing in common.

An absolute obsession with Aston Villa.

“There is a God in football and his name is Paul McGrath.” Words you expect to hear outside the Holte End, but these words, along with famous Aston Villa chants, have travelled across land and sea to the Ashanti region of Ghana.

In Juaben, they are Aston Villa mad. Over 1,000 Villains reside in the village and every Sunday morning they wake at 5am, dressed head to toe in Villa gear, and around the streets they are chanting and making a racket that Villa Park itself would be proud of. So how on earth did this crazy, continent-crossing, love affair begin?

Well it’s all down to one of the residents, Owusu Boake Amando, and his late grandfather. As a child, Owusu lived in Birmingham with a family who were - you guessed it - big Aston Villa fans. They joked that they wanted the Ghanain to play for their club, and that, my friend, is where the bond was formed.

Owusu’s football-mad grandfather told his family back home about the club and stories began to spread of McGrath and other Villa legends. Now the entire place is packed full of people obsessed with all things claret and blue. Owusu founded the Ghana Lions supporters club in 2010, and now hundreds of people gather to watch every Villa game they can. One day he hopes to travel to the UK  to see his beloved team in the flesh.

"It is my dream, my heart's desire, when my grandpa was alive it was his dream to come to Villa Park, but he couldn't fulfil it, I want to do it for my grandpa,” says Owusu. "When we were kids, he used to tell us more stories and history about Aston Villa, and he used to talk about a certain player called God."So one day me and the kids went to him and asked him 'Grandpa, who is that God you are talking about because we all know that there's only one God and he is in Heaven.' He was laughing and he told me that there's a God in football and his name is Paul McGrath. My grandfather passed away 10 years ago and I inherited doing what he used to do for us when we were kids." 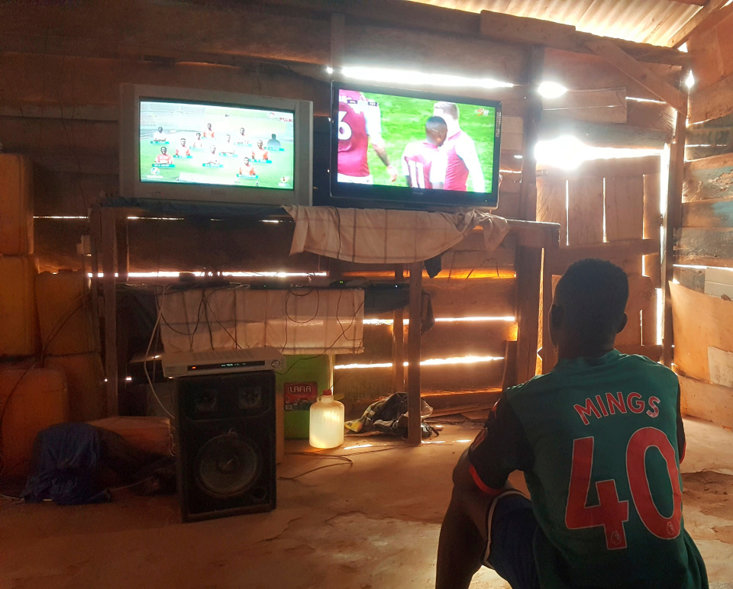 Villa fans in the UK have already helped out their fellow supporters at the Ghana Lions, setting up an online campaign, the Aaron Smith Fund, to raise money for footballs, kits and cones for the local team. Guess what they are called? Yep. Aston Villa.

And this outfit has caught the eye of current star players, including captain Jack Grealish, who’s donated to the cause along with teammate and all-round good guy, Tyrone Mings.

In fact, Villains all over the world have united in support of their West African colleagues. If you look closely at Villa Park this season, you will see a flag dedicated to the Ghana Lions, emblazoned with the famous Villa crest and the Ghanain flag. Rick Leong of the San Francisco Aston Villa Supporters Club is the man responsible for that, showing the true camaraderie between Villa fans across the globe.

Aston Villa kick off their season against Sheffield United on Monday and, 5,000 miles away, the Ghana Lions will be glued to the screen. This tiny African village has proven just how global football is. They truly are part of the pride.