In the Friends episode, The One Where Old Yeller Dies, the character Phoebe Buffay (Lisa Kudrow) watches the 1942 film The Pride of the Yankees, but is disappointed after thinking that she was going to watch an upbeat movie about "Yankee Pride" and is instead left surprised and upset when "Boom, the guy gets Lou Gehrig's disease!"

The ‘guy’ turns out to be Lou Gehrig.

Of course the legendary New York Yankees first baseman should be remembered for far, far more than the devastating amyotrophic lateral sclerosis (ALS) from which he passed away from, aged just 37, on June 2, 1941.

A bona fide American icon, Gehrig played in 2130 consecutive games and hit 493 career home runs, not leaving the Yankees’ line-up once in 13 years between 1926 and 1939. His lifetime batting average was .340, he amassed more than 400 total bases on five occasions and is one of only seven players with more than 100 extra-base hits in one season, and one of only two players to ever manage it twice. He averaged 147 RBIs a season, a benchmark no other player managed for forty years. Gehrig’s 184 RBIs in 1931 remains the highest single season total in American League history. 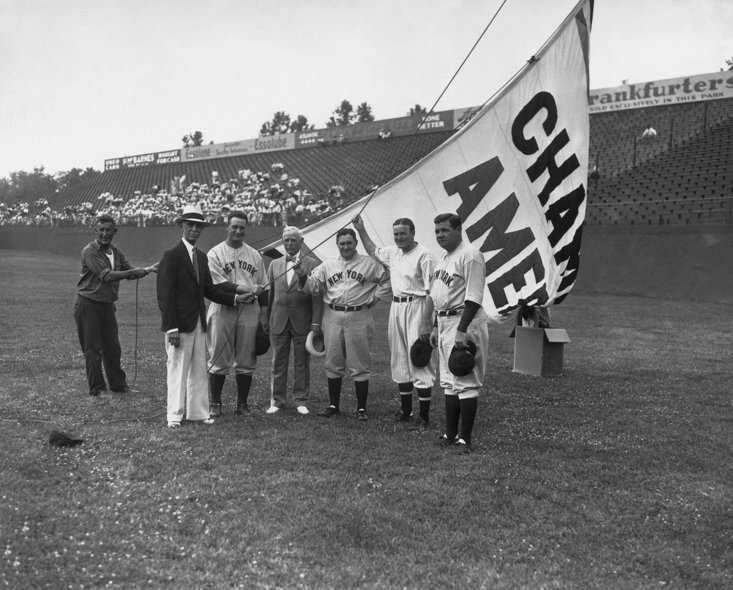 Having signed his first professional contract with the Yankees in April 1923, across the next 15 years he led the team to six World Series titles, the first four alongside Babe Ruth, the man with whom he endured a fractured relationship with. In terms of outward personality, Ruth was colour, Gehrig was black and white. Ruth was the diamond in the rough, Gehrig was that clear-cut of Cullinan quality. However, where compatibility didn’t exist in character, it became prevalent on the field.

The only thing Gehrig gained more in number than World Series were fractures in his hands, with 17 being found after an x-ray late in his career. That, including broken thumbs, as well as broken toes and back issues, earned him the nickname ‘Iron Horse’ and had never stopped him from playing.

But then in 1939, something tragically did. Noticing a drastic deterioration of his superlative ability, Gehrig would be afflicted with a degenerative disease that affects the motor neurons in the brain and spinal cord, causing the loss of control of voluntary muscles. There remains no cure, and the condition is today commonly referred to by the famous baseball player who had to exit the sport he loved prematurely because of it. 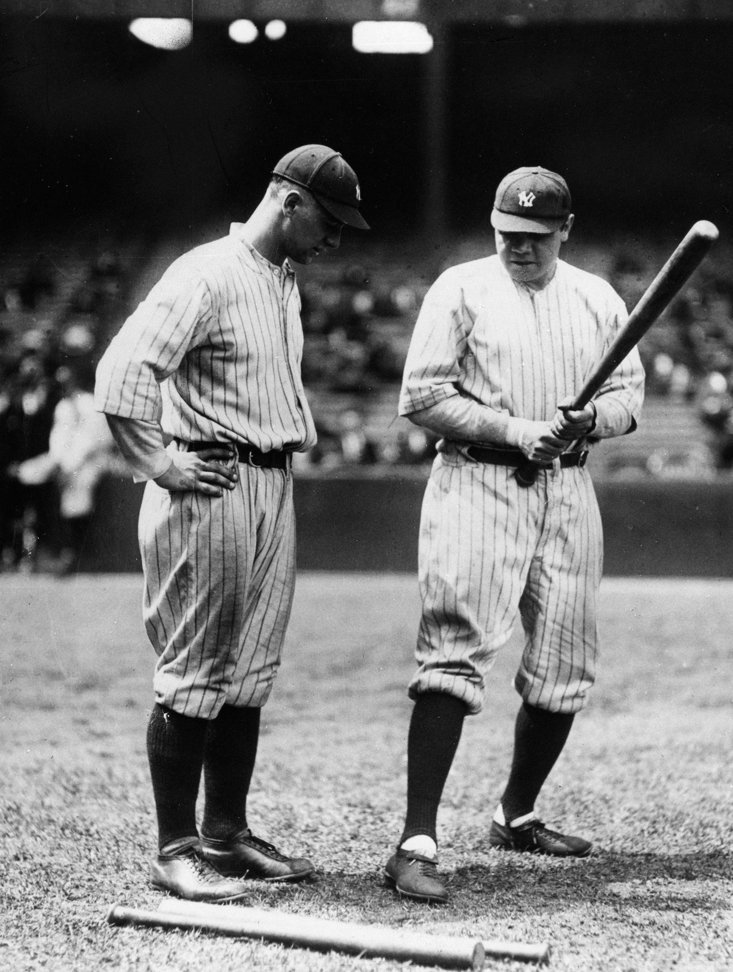 When Lou Gehrig had himself withdrawn from what would have been his final game for the Yankees due to his accelerating weakness, the announcer had the sad duty to inform the fans, “Ladies and gentlemen, Lou Gehrig’s consecutive streak of 2,130 games played has ended.”

Before he died, Gehrig made history again. On Independence Day, 1939, he became the very first recipient in Major League Baseball to have his jersey number - his number four - retired. The honour, which would set a standard for franchises to a mark individual greatness, was bestowed on his "Appreciation Day" at Yankee Stadium, on July 4. Addressing the congregated crowd of 62,000 attendees, and both the Yankees 1927 and 1939 sides, Lou Gehrig then proceeded to make his now-iconic "luckiest man" speech. The recital is virtually the sporting equivalent for baseball fans of the Gettysburg Address.

"Fans, for the past two weeks you have been reading about a bad break,” Gehrig announced, “Yet today I consider myself the luckiest man on the face of the Earth. I have been in ballparks for seventeen years and have never received anything but kindness and encouragement from you fans.”

"Look at these grand men,” he told the stadium through the booming, echoing microphone indicating to the two line-ups he had played in, “Which of you wouldn't consider it the highlight of his career just to associate with them for even one day? Sure, I'm lucky.

“Who wouldn't consider it an honour to have known [Yankees owner] Jacob Ruppert? Also, the builder of baseball's greatest empire, [president] Ed Barrow? To have spent six years with that wonderful little fellow, [the late player] Miller Huggins? Then to have spent the next nine years with that outstanding leader, that smart student of psychology, the best manager in baseball today, Joe McCarthy? Sure, I'm lucky. 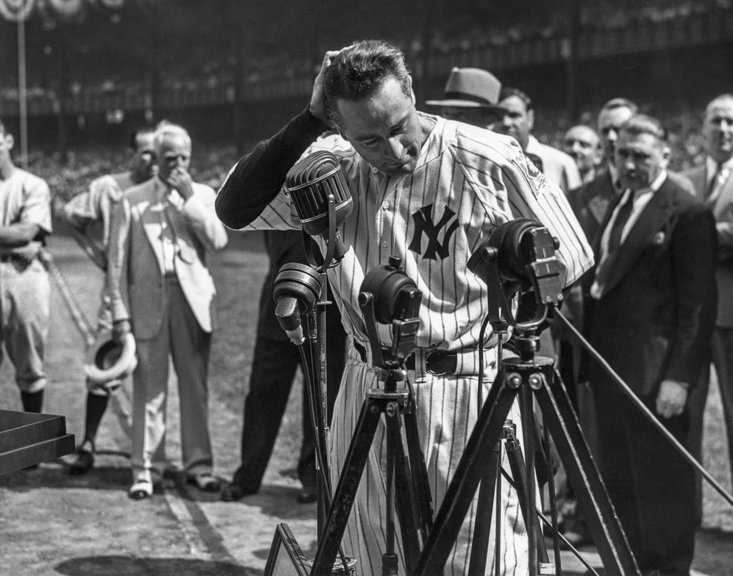 "So I close in saying that I might have been given a bad break, but I've got an awful lot to live for."

At the conclusion of the speech, Ruth put his arm around the devastated Gehrig and whispered privately into his ear. It was the first time the two men had spoken in six years, when the two contrasting characters’ relationship had been extinguished due to an off-field dispute.

Before the end of that year, Gehrig was elected to the National Baseball Hall of Fame and the precedent of retiring a jersey number for similar greats of the game, including Joe DiMaggio, Mickey Mantle, Jackie Robinson, and, of course, Ruth, continues to this day, with over 150 players having been granted the prestige and various franchises.

Just under two years later after his Yankee Stadium speech, on June 2, 1941, ALS defeated Lou Gehrig. His widow, Eleanor, amongst the avalanche of condolences, received flowers from President Franklin Roosevelt.

An ESPN SportsCentury documentary suggested that Gehrig “went to his grave, still unsure of his own greatness”, but it was something that baseball was quick to rectify to the world, if not the player. The Lou Gehrig Memorial Award is given annually to the MLB player who best exhibits Gehrig's integrity and character and a memorial in Gehrig's honour was dedicated by the Yankees in the very year of his death and still has pride of place in Monument Park at Yankee Stadium.

Lou Gehrig may have defiantly declared himself ‘the luckiest man in the world’, but baseball knows, and has shown, that it was the world which was lucky to have him.