Ufc
Features
The Brit tips Edwards to cause a shock and become a bigger name in UFC
Gary Maiden
20:01, 10 Jun 2021

Michael Bisping remains the only British UFC champion in history, but is backing Leon Edwards to beat Nate Diaz at UFC 263 this weekend on the way to a title shot of his own.

Edwards and Diaz will meet in Arizona on the undercard of the much-anticipated rematch between Israel Adesanya and Marvin Vettori for the middleweight title, in the first ever five-round bout that isn’t a title fight or main event.

Bisping, who became world champion back in 2016, believes that a win over a name like Diaz can propel Edwards to superstardom.

“Diaz is incredibly tough and he deserves everybody’s respect. He’s a fighter’s fighter. All the qualities you look for in a fighter, Diaz has,” Bisping says during a sit down with The Sportsman.

“But he’s met his match here. Leon’s too big, he’s too good. He has more ways to win, Leon can out-grapple him, he can take him down whenever.

“Diaz isn’t a strong wrestler. He’s very good on the ground and a good boxer with a great chin and excellent conditioning.

“He’s not a one-punch knockout power kind of guy. I think Leon is, certainly against Diaz. With his head kicks he can knock out Diaz just like Josh Thomson did. I struggle to see a way in which Diaz can win this fight. I can think of ways, but I don’t believe them and don’t think they’ll happen.”

However, ‘The Count’ admits that he has been wrong before and insists that you can never write off the Californian.

“Diaz has shown he can surprise people time and time again. When he fought Conor McGregor that first time, I was fighting Anderson Silva the week before, and I told everybody Diaz is going to get sparked. We all know what happened.

“That’s the beauty of the UFC.” 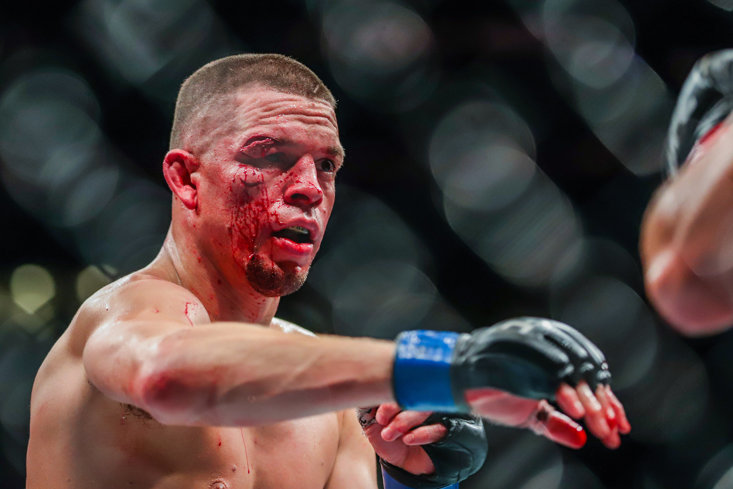 DIAZ IS THE BETTER-KNOWN FIGHTER, BUT BISPING IS TIPPING HIM TO LOSE

Edwards was on an eight-fight winning run before his no-contest with Belal Muhammad back in March, and while his recent record is beyond question, Bisping believes that a win over a name like Diaz would take him to another level.

“That’s what he needs. It’s the only thing that has held his career back because Leon is a tremendous fighter on a hell of a winning streak and is doing everything right.

“However, his brand name isn’t what it could be. Certainly over here in America, the die-hards know who he is, but there’s a massive casual fanbase that tune in for the big fights. They don’t know who Leon Edwards is, but they know who Nate Diaz is. Of course they know who Nate Diaz is, so they’re going to tune in for Nate Diaz, not knowing who Leon Edwards is. They probably think Diaz is going to go in and smoke this English guy.

“On Saturday night, when Leon batters Nate Diaz, all those people that are Diaz fans are going to be Leon Edwards fans.

“That’s what he needs. If you’re going to get title fights, beating a star is going to help. That’s the final piece that Leon needs. It’s genius matchmaking.”

If Edwards is going to get his title fight, his quickest route appears to be in a rematch against current welterweight king and number two in the UFC’s pound-for-pound list Kamaru Usman.

‘The Nigerian Nightmare’ won their 2015 bout via unanimous decision, and while Bisping stopped short of predicting a win for ‘Rocky’, he gives him a serious chance.

“From a business perspective, maybe he wasn’t the biggest star. Now he’s going to beat Nate Diaz, so that box is ticked as well.

“If I was Leon, I’d beat Nate Diaz and wait on the side lines to fight Usman. Leon is the toughest fight in the welterweight division for Usman.

“So whilst Leon is getting better all the time, so is Kamaru. It would be a very competitive fight. I wish him all the best.” 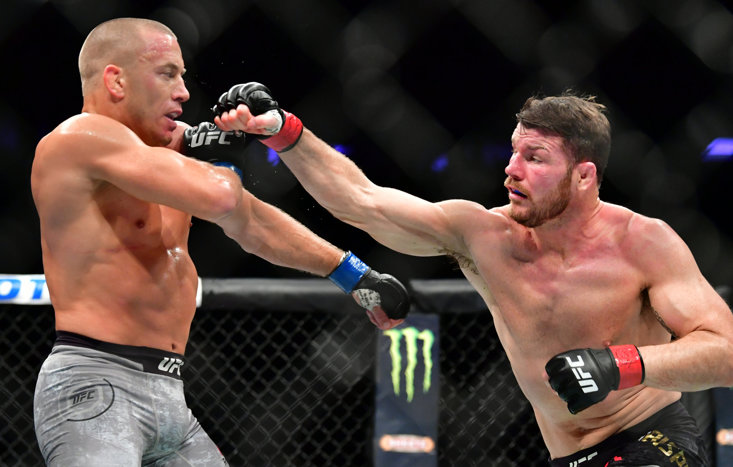 BISPING (RIGHT) SAYS THE FUTURE IS BRIGHT FOR LEON EDWARDS

Following on from the Edwards-Diaz fight, there is the small matter of the grudge match between Adesanya and Vettori.

The pair met in 2016, with Adesanya handed the split-decision win. The bad blood has continued over the years, with Bisping recently hosting a sit down between the two middleweight stars.

“It got very personal, which is great. It’s awesome to see the respect and shaking hands, but it’s way better when they hate each other and it’s real. That’s going to make the fight deliver even more. As a fan, I absolutely loved it. It’s going to be an interesting fight, I can’t wait.”

Adesanya is the 4/11 Betfred favourite to defend his middleweight title, although Bisping thinks the best way to beat ‘The Last Stylebender’ is to take the fight to him.

“You’ve got to get in his face. If you crowd the kicker, you get in the pocket, it’s harder for him. You’ve got to put him on the back foot and mix up the fight.

“I’m a massive fan of Adesanya, but he could definitely do with improving his ground work.

“He’s probably the best striker in the whole of the UFC.”

UFC 263 is one of the most stacked cards in recent times, and Bisping struggles to contain his excitement for a bill that also includes Deiveson Figueiredo defending his flyweight title in a rematch against Brandon Moreno.

“Top to bottom, the fights are just fantastic. The main event is unreal. Brandon Moreno and Figueiredo was a contender for fight of the year last year, and I think this will be just as good.

“The main event and the Leon Edwards fight I’m looking forward to the most. It’s going to be a great night, I can’t wait. The fights are so good, I’ll be sitting there very entertained.”