Rugby
Features
The set-pieces have become a bone of contention due to the constant resets
Sam Larner
and
Rhiannon Garth Jones
07:05, 07 Feb 2020

To some they are the central feature of the sport of rugby union. To others they are a way to hide the ball from the fans for a lengthy period of time. There have long been debates about the merits of scrums, and with the Six Nations Championship now in full swing their place in the game is again coming under scrutiny.

With more and more scrums having to be halted and reset there have been ever-larger chunks of time taken out of the game of late, leading to calls from the likes of England fly-half George Ford for a streamlined ruling on the set-piece going forward.

"We could see a lot more ball-in-play attacking and defending if we sorted the scrum out," Ford to the i newspaper in December. "Maybe have a rule that you stop the clock while the scrums are reset. Or a rule that the maximum we can reset a scrum is twice."

But with many new rules soon usurped by teams finding different ways to slow the game down, could it be time to get rid of the scrums completely? We got two of our rugby writers to state their case...

The Scrum Has Lost Its Reason For Existing - By Sam Larner

When you pay your £100 for a Six Nations ticket, how much rugby do you expect to see? If you said 80 minutes I am afraid you are a long way off the mark. The answer is more like 35 minutes, 40 if you are lucky. For every minute you watch some rugby you will watch a pitch where nothing is happening.

The Blitz Defence blog worked out that about 20% of game time is lost to the scrum. If you stopped the watch every time there was a scrum, or removed them entirely, you would have about the same ball in play time as a game of football. If you want to see more rugby then the easiest solution is to do away with the scrum.

The scrum is meant to be a way to restart the game. You put the ball in and then you pass or run with it after a short period of pushing. Rarely is that the case anymore. In a recent Pro14 match there were nine scrums, four were reset at least once and two ended in either penalties or free kicks. That means that just 56% of scrums actually restarted a game cleanly. That is not an unusual figure either. Scrums are not doing what they were intended to do, they are slowing down the game not restarting it.

Finally, and perhaps most importantly, the scrum is damaging the game at the lowest level. Since 2016 the number of participants who play twice a month has fallen by approximately 12%. One of the problems at a grassroots level is that games cannot happen if there is no front row players. You could have 30 players all dressed and ready to play but if each side does not have three, or four at some levels, who can play in the front row the game cannot go ahead. How much simpler the game of rugby would be if the scrum was tossed aside. It was a good idea at first but it has long since lost its reason for existing.

Abolish the scrum today and you get 20% more rugby tomorrow. 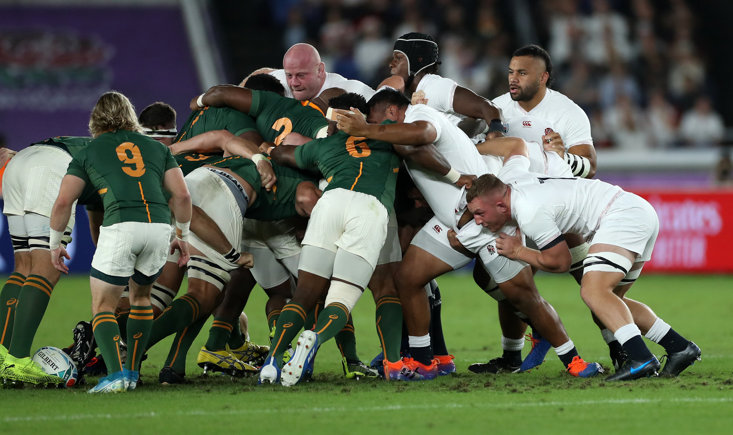 Yes, done badly, scrums can be tedious. Nobody wants endless resets or 76 minutes of scrummaging as players sink further into the literal and metaphorical mire. But much of what is essential about rugby union is present in the scrum: the combination of physical contest and mental struggle, the way technical ability can suddenly create a David and Goliath situation, the relationship between players and the referee, the thrilling amount of space created by so many players contesting the ball.

In rugby union, the ugly is almost always a prerequisite for the exquisite. Stunning back play rarely happens without the grunt and unseen work of the forwards. To lose scrums would be to diminish the contrast, the contest, the complexity. We would be left with a lesser sport.

Less poetically, the difference that South Africa's scrummaging ability made in the recent RWC demonstrated clearly the role a dominant scrum can play in deciding a game. And it is not always as simple as the bigger team winning – against South Africa in 2015, Japan showed how a conspicuously weaker side could still compete in the scrum. Scrums can generate a buzz unlike anything else.

That said, there are definitely improvements that could be made to improve the viewer experience. Stopping the clock until the ball comes out, reducing the incentive to waste time with re-sets, is one of the simplest changes that could be made for viewers. Better on-screen analysis of the "dark arts" of front-row play would also help – too often, the viewer is left shrugging about the infringement judged to have taken place.

Since its mythical beginnings, every aspect of the game has shifted in some way or another, to accommodate varying concerns. More changes can and should continue to be made in the interests of both player safety and the viewing experience but we should aim to do scrums well and retain what is integral to the sport, not jettison it. Done well, they are a gripping, visceral, enthralling part of the sport. We shouldn’t throw the scrum away because they can also be done badly.