If you’ve only heard Tottenham’s Europa League Round of 32 opponents read out loud on the radio, you can be forgiven for thinking Jose Mourinho and his team face a difficult trip to Germany to take on Wolfsburg on Thursday night. The team currently sitting in a Champions League place in the Bundesliga. The team Edin Dzeko and Kevin De Bruyne left to join Manchester City.

In fact, on Thursday, Spurs face Wolfsberg - and yes, it’s Wolfsberg or Wolfsberger AC, but never Wolfsberger - a team sat in sixth place in the Austrian Bundesliga. A relative walk in the park compared to facing Wolfsburg? Maybe not. Wolfsberg is a tiny town in Carinthia, southern Austria, with a population of just 25,000, and the football club are minnows on the European stage. But they have already shown they can put giants to the sword.

Promoted to the top division for the first time in 2012, their maiden foray into the Europa League came only three years later. However, they were handed a nightmare draw in the qualifying rounds, forced to face Borussia Dortmund, who dispatched them 6-0 on aggregate.

They fared much better when they qualified for the tournament again in 2019, miraculously drawing with Roma at home and on the road, scoring twice at the Stadio Olimpico, but the best result came when they beat Borussia Monchengladbach, who were leading the German Bundesliga at the time, 4-0 away. It wasn’t enough to progress from Group J but they had proved themselves as a team to fear. 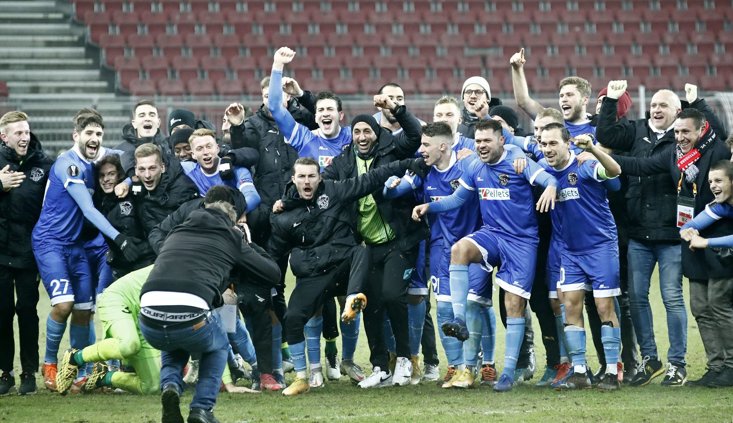 This season, they fully deserve their knockout tie with Tottenham after doing the double over Dutch giants Feyenoord, winning 4-1 at De Kuip, as well as chalking up a 1-0 triumph in Russia against CSKA Moscow. For a team of their size and standing to win domestically is huge, for them to win on the continent is seismic.

So, how have they managed it? A large benefactor pumping money into the club? Not at all. Savvy purchases and sensible decisions have been key. “They finished 5th in their first season and generally fluttered around mid-table until the last couple years, where good management, shrewd signings and general club stability rocketed them into two consecutive third place finishes,” Simon Clark, co-host of The Other Bundesliga podcast, tells The Sportsman.

“The two managers who've overseen the rise are Gerhard Struber, of Barnsley fame, and now Ferdinand Feldhofer, who very much continued where Struber had made his mark. There's also the signings, this isn’t a squad of players collated from top clubs, but players who've come to WAC to improve. An example is Shon Weissman. Signed on a free transfer, he won the Golden Boot and was then sold to Real Valladolid for €4m in the summer.”

For context, Wolfsberg’s squad cost £15.7m to assemble and their record signing, Dario Vizinger, set them back only £700,000. In comparison, Tottenham’s team cost £625m, while their top purchase is Tanguy Ndombele, who they bought from Lyon for £56m.

So, besides striker Vizinger, who else do Spurs need to be aware of?

“Michi Liendl is undoubtedly the star man,” explains Simon. “He is enjoying a remarkable career renaissance at the age of 35 where he's a bonafide assist machine. He's the top assist-maker in the league at the moment and was last season too. Almost all attacking moves will go through him at one point. He scored a hat-trick versus Feyenoord in the group stages.

“Then there is Dejan Joveljic,  a 21-year-old Serbian striker on loan from Eintracht Frankfurt who's in double figures for the season already and looking like a real talent, and Dominik Baumgartner, we're a big fan of him on the podcast. He’s just a solid centre-back who has been a standout for the club over the last couple of seasons.”

Wolfsberg will ‘host’ Tottenham in Budapest, at the Puskas Arena where Liverpool beat RB Leipzig on Tuesday, but are well versed in playing their home fixtures away from their scenic 8,100-capacity Lavanttal Arena having played previous European fixtures in Graz last season and Klagenfurt this time around.

Wolfsberg are flying the flag for Austrian football in Europe alongside RB Salzburg, the country’s dominant force in modern times who face Villarreal this week, and on Thursday they’ll have the backing of the nation.

“In Austria they are viewed with a great deal of respect,” Simon tells us. “Nobody expected them to reach the knockouts and they are the underdog that everyone wants to see succeed on the continent. They are seen as the aim of every small club in Austria. Well-managed, spending within their means, and great scouting has seen them become a model club.

“Can they continue at this level? Probably not, compared to other clubs like Rapid, Salzburg, LASK, Sturm, Austria Wien, they are a tiny club. It makes what they're achieving even more special.”

Wolfsberg have pulled off some of the biggest shocks in Europe this century and they’ll be plotting another surprise for Spurs. They may not be Champions League-chasing Wolfsburg, but Tottenham, you have been warned.