With that, a noticeably irritated UFC lightweight champion Khabib Nurmagamedov pulled out of his much-anticipated bout with Tony Ferguson at UFC 249, citing reasons (there are no aeroplanes, for example) that would have been perfectly acceptable to anyone besides admirers of simulated fights to the death.

Said mixed martial arts fans labelled Nurmagomedov a girl’s blouse of the flounciest order and sulked ostentatiously, in that order, as they are wont to do. But they cheered up a tiny bit when it was announced that Ferguson’s new opponent was Justin ‘The Human Highlight Reel’ Gaethje.

Podcaster and UFC commentator Joe Rogan has christened Gaethje “the most violent man in the world’s most violent sport”. Indeed, the tiggerish contender is beloved of mixed martial arts aficionados who view his approach – tremendously enthusiastic inside the cage, low key out of it – as a timely antidote to the UFC’s ‘Reebok Era’ with its novelty championship belts, social media drama, women’s divisions and other, previously unthinkable, sufferances.

Why? Who is this game-faced challenger, and what has he done to revive the spirits of grumpy mixed martial arts fans? Read on… 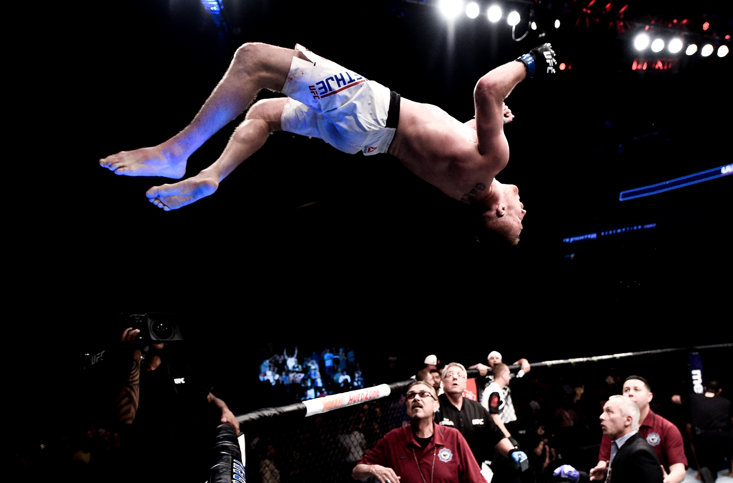 Is he ‘legit’, or is he just the only contender willing to travel and fight this weekend?

Gaethje has his own surname tattooed across his back and the logo for his sponsor Bad Boy imprinted on his rib cage. He is considered the prime exponent of the ‘cage flip’, a piece of celebratory gymnastics where a victorious competitor will run up the side of the cage and launch himself backwards from the top, somersaulting mid air and landing smoothly. He has endearingly fluffed it at least once.

Aged 31 and scrapping out of Denver, Colorado, Gaethje is trained by striking guru Trevor Wittman. He’s a long-established coach considered one of the best in the world, who makes his own range of boxing gloves by hand and is often called upon to add gravitas to UFC commentary.

Gaethje made his pro MMA debut as a student in 2011 and signed for mid-level MMA promotion World Series of Fighting (WSOF) in 2013, where he won the lightweight strap in January 2014 and amassed a 17-0 record before heading to the UFC two and a half years ago. Although he stumbled against both Eddie Alvarez and Dustin Poirier, convincing first round knockout finishes against James Vick, Edson Barboza, and Donald Cerrone put him in title contention.

Gaethje’s base, though, is actually wrestling. He was ‘All American’ (meaning he finished in the top eight at the national championships) at the NCAA Division One in 2007, and trained with George St Pierre when the consensus MMA GOAT was hellbent on honing his own wrasslin’ skills.

Lazy observers will comment on how Gaethje ‘never uses his wrestling’ and it’s correct that he seems to focus on stand up and neglects his background when it may be useful. But he is also the latest in a long line of wrestlers who use their grappling acumen to strike with confidence (see also: Chuck Liddell, Dominic Cruz). For instance, he will feint the takedown to land an uppercut and suddenly switch from a dirty boxing ‘grind’ against the cage to an explosion of hooks.

Admittedly this may not cut the mustard against the magically instinctive Ferguson, whose game is so colourful and furious that Gaethje’s set-ups will be difficult to apply, let alone convert.

But to answer the question, you could bottle Justin Gaethje and sell him as Authentic MMA Juice. 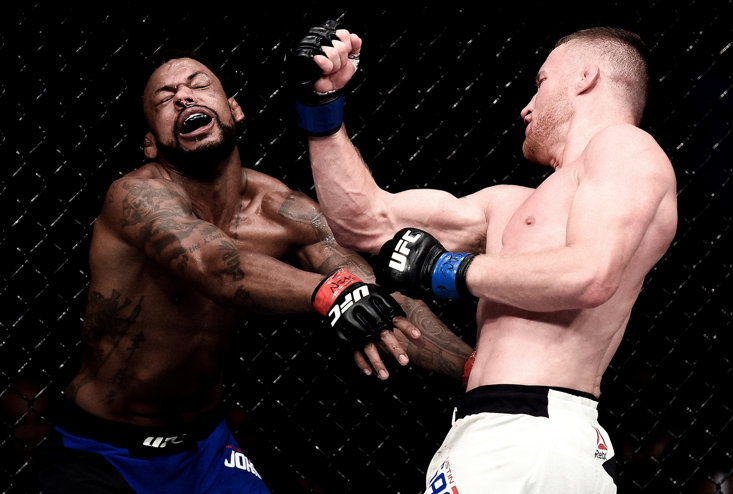 Is there a messy family background that forged this nutcase?

Actually not at all. Gaethje’s grandfather (the name is German) boxed for the US Army. Gaethje’s dad John Ray and twin brother Marcus both work at the famous Morenci Mine in Arizona, which is some proper Bruce Springsteen shizzle.

Rather than a seething mass of resentment waiting to explode, Gaethje seems to be one of those fighters who treats a mixed martial arts contest as one notch up from dicking around on a bouncy castle. “My family will still love me and my dogs don’t give a shit,” Gaethje said of his underdog status on this week’s press conference call.

‘The Human Highlight Reel’ is the only UFC fighter to win a performance bonus (usually awarded for aggression) in all six of his first UFC bouts. The seventh is this weekend.

Gaethje doesn’t possess the cinematic martial arts flair of a Zabit Magomedsharipov or a Yair Rodriguez. His style is what trainers euphemistically dub ‘pressure fighting’ or, in Gaethje’s own words, “kill or be killed.”

Rather than snarling his way to the Octagon, though, Gaethje wears a smile of barely-repressed childlike excitement, and declares his love for the sport during post-fight interviews rather than clumsily ‘asking out’ rivals.

This combination of hardcore blood-letting and polite enthusiasm might seem incongruous to the outsider, and possibly not a little psychotic. But to the average alienated MMA fan, it’s a talismanic revival of traditional male values during a needlessly neurotic and risk averse age. Or something.

Is this unbridled enthusiasm backed up by surgical ruthlessness when it counts?

Naturally. Gaethje’s first title defence at WSOF was against Nick Newell: an inspiring disabled fighter who not only has no left arm, but was undefeated at the time and pushing for a UFC contract against all the odds. Gaethje put him down with a right hook that Newell might have struggled to defend against considering his impairment.

Almost two years later Gaethje faced Brian Foster, a sleeping giant of British mixed martial arts who had scrambled his way back to prominence after an operation to remove a testicle. He finished Foster with leg kicks within two minutes.

Presumably this guy also has a heart of gold?

Very much so. Gaethje has repeatedly stated that his goal upon retirement is to become a social worker looking after disadvantaged children. His mould of cage fighter is the one you wouldn’t think twice about barging past to get to the bar, and he’d probably ignore it if you did.

When he puts on his spectacles to help focus during an especially probing interview, ‘The Human Highlight Reel’ bears an uncanny resemblance to Bottom-era Adrian Edmonson. And in lead-up interviews, he’s said he’s “fucking terrified” of Tony Ferguson.

His social media reflects the same ingenue quality. “You’re a tool. You have lost everything already. You are a shit human, father, and husband. Fuck you” he Tweeted to a rock-bottom Conor McGregor in September 2019. “Lmao cute wife” one Conor fan replied, regarding the lady bearing Gaethje’s WSOF belt in his profile pic. “That’s my mother you fuck” Gaethje retorted.

Justin Gaethje fights Tony Ferguson in the main event of UFC 249 taking place on Saturday 9th May, available via pay-per-view on BT Sport.