Tennis
Features
He could achieve something only Steffi Graf has done before...
Simon Lillicrap
21:10, 07 Sep 2021

Only five people in history have ever won a Calendar Slam. That’s the Australian Open, French Open, Wimbledon and the US Open in the same year. For the men, Don Budge (1938) and Rob Laver (1962 and 1969) achieved this incredible feat and for the women, Maureen Connolly Brinker (1953), Margaret Court (1970) and Steffi Graf (1988) won all four in the space of twelve months.

Novak Djokovic is just three matches away from joining this incredibly exclusive club, as victory at the US Open would not only take him to 21 Grand Slam titles, but secure his place in history.

That club becomes even more exclusive when you dive into the details, and in fact, Djokovic could replicate what only the great Steffi Graf has done before. The Open Era, where professionals could enter the same events as amateurs only began in 1968, which means we must differentiate between the winners before and after that date.

That means one of Laver’s wins, along with Budge and Brinker, must be appreciated, but separated from what the modern day great is on the brink of achieving. Then we must take a look at the following nine year period of the Open Era that saw Laver win his second Calendar Slam and Margaret Court complete the clean sweep in 1970.

The differential here is that for this time period, only two surfaces were used across the Grand Slam events, grass and clay. Clearly, mastering two surfaces is a much simpler task than the three we see today, but even between the two modern-day ‘hard surfaces’ in Melbourne and New York there are subtle differences not seen between the differing grass and clay courts. 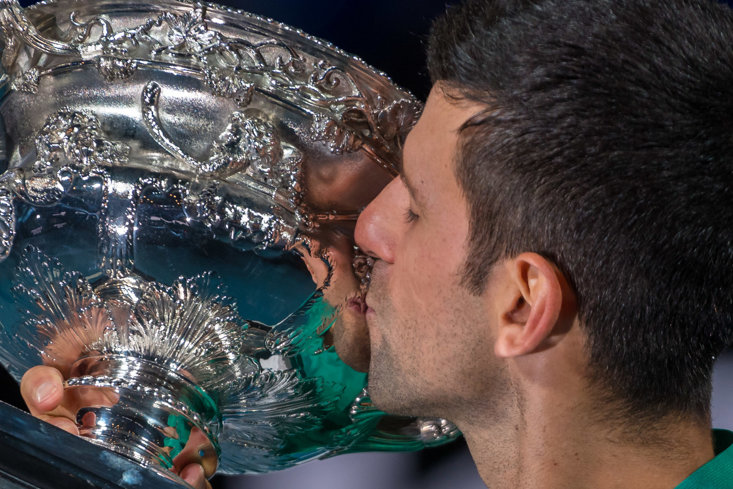 For the opening years of the Open Era, only the French Open wasn’t played on grass which meant that if you were the world’s best player on the green stuff, you were ¾ of the way to completing what has seemed an impossible task for the past three decades. It took until 1978 for the US Open to switch to a hard court and a further decade for the Australian Open to also switch to hard, even though it plays differently to their cross Pacific cousins.

So, judging by these parameters, the only player in history to have completed a modern day Calendar Slam is Steffi Graf. In 1988, she won on three different surfaces in the professional era, while no male in history has achieved that same feat. Until now.

This year, Djokovic lifted the Norman Brookes Challenge Cup in Melbourne in testing conditions, he stunned the King of Clay Rafael Nadal in the semi-finals at Roland Garros on his way to the title, while Wimbledon was a mere formality as the draw opened up for the Serb. The only blip on his perfect record from this year is his failure to win the Golden Slam, as he had a surprising semi-final loss to Alexander Zverev at the Olympics in Tokyo.

That one will still hurt Djokovic, who was only a couple of matches away from the potentially perfect year, but there is still work to be done in New York. He faces Matteo Berrettini in the quarter-final, while his new rival Zverev remains a dangerous opponent that could lie in wait. Surely the German couldn’t deny one of the greatest of all time the Golden Slam and the Calendar Slam in the same year?

The fact of the matter is that the 34-year-old is three matches away from history. No man has won all four Grand Slams in the professional era, on three different surfaces in the same year. This also puts into perspective what a phenomenal talent Steffi Graf was, but by the end of the week she could have some company in her exclusive club.