If sneakers were granted a Hollywood-style walk of fame - and we see no reason why not - then the classic, Nike Blazer Mid ‘77, would have to be among the first in line.

It alone was the shoe that allowed a fledgling company called Nike - anyone? - to catapult itself onto the emerging sneaker market, in 1973. A simple shoe. But with one hell of an impact. This plain white, high-top, became the blank canvas that allowed the Swoosh sign to sing. Thanks to its minimalist design, it was possible to enlarge the logo and stitch it to either side of the sneaker. And, well, you know what happened next. 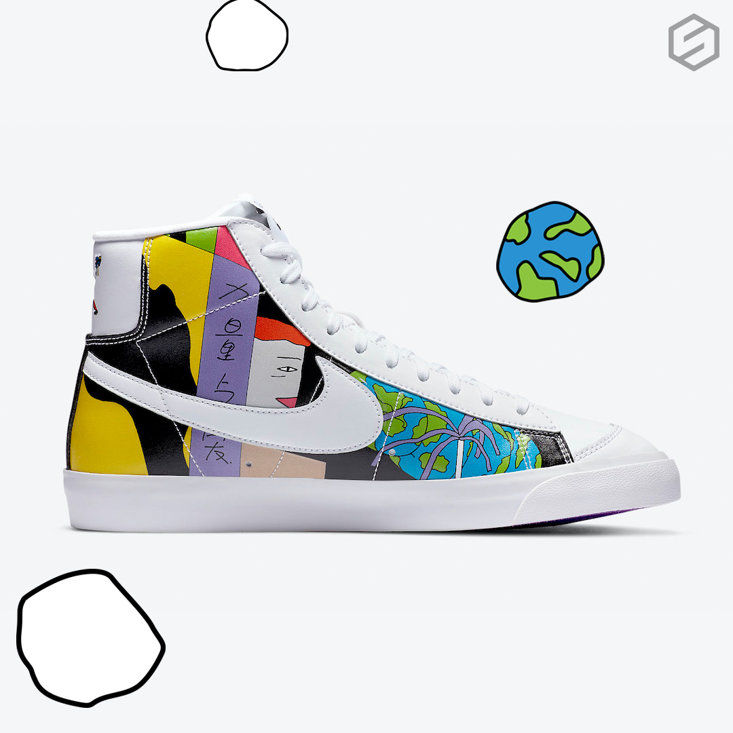 Five decades on and the Blazer Mid ‘77 is a canvas once again. This time for the supremely gifted, Berlin-based visual artist, Ruohan Wang. Known for invoking bold, feminine power in her art, this collaboration with Nike - which sees her transform the Air Force 1 and Air Max 90 also - has delivered. 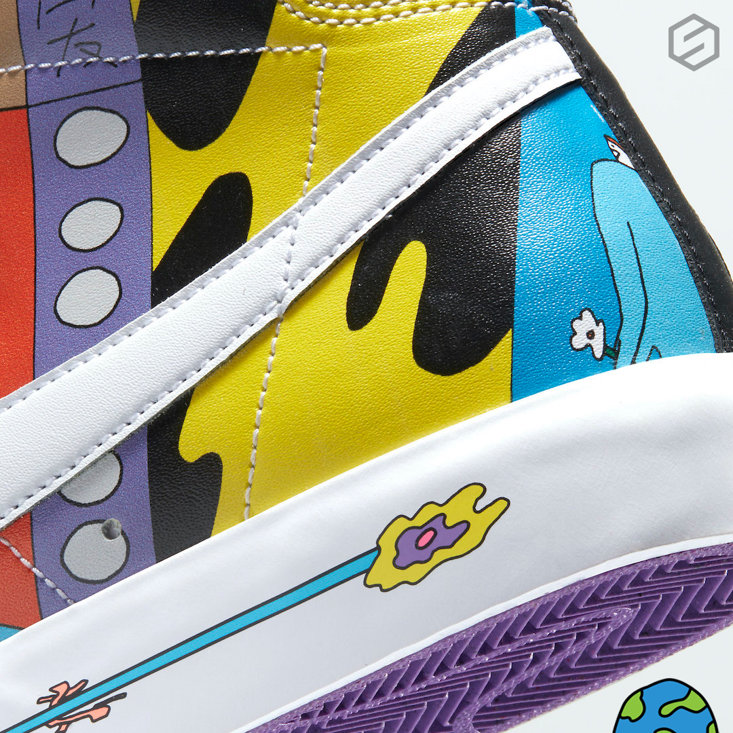 The Blazer Mid ‘77 is a cascade of neon colour, about as far removed from its natural look as can be. Literally stepping out of its comfort zone. Always to be welcomed. Add to the mix the images of the globe, people’s faces, flowers and the tongue labels and heel panels that alternate between hand-drawn images or text, and it’s, quite frankly, a work of art.

All the images are printed onto Flyleather, a material made of at least 50% recycled natural leather fibre. It’s all about the detail. Contrasting its vivid uppers, the shoe sports a crisp white Swoosh and a midsole that’s been marked with the artist’s signature. Delightful. 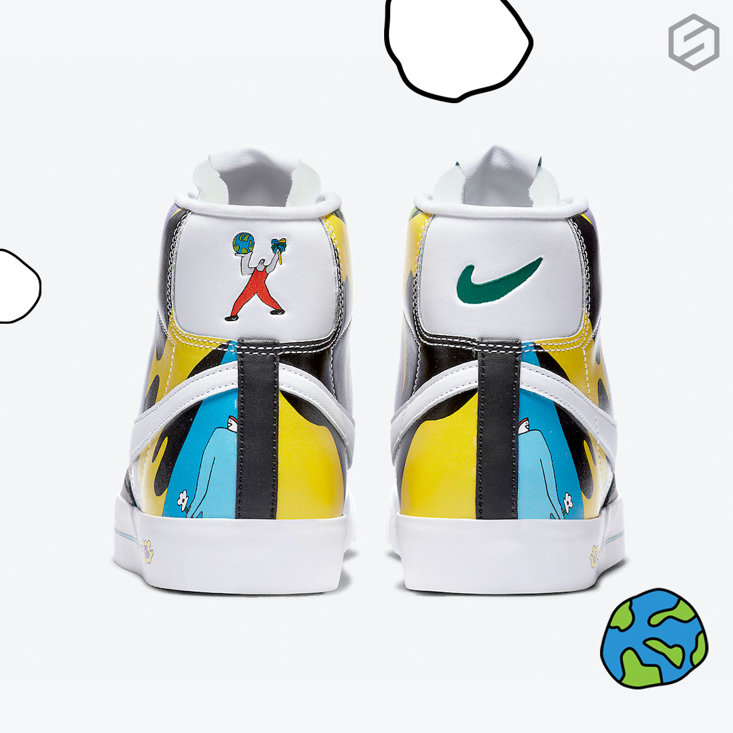 The Air Max 90 comes with a plethora of brightly coloured panels, including a purple heel counter with a bright yellow rubber patch logo, a light blue Swoosh and toebox, and a light green rubber Air sole unit. 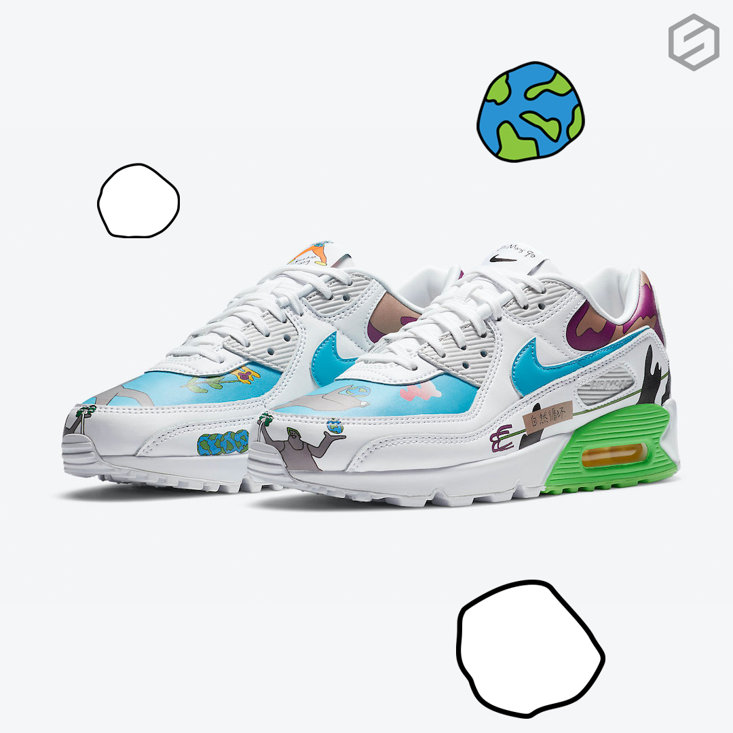 And finally, in this holy trinity of trainers, the Air Force 1 boasts the most striking colour scheme of all three, leaving no panel untouched. A wondrous medley of psychedelic graphics including globes, pink clouds, lightning bolts, flowers and faces adorn the silhouette. All of these features rest over a clean white midsole, lightly accented with green “AIR” branding. 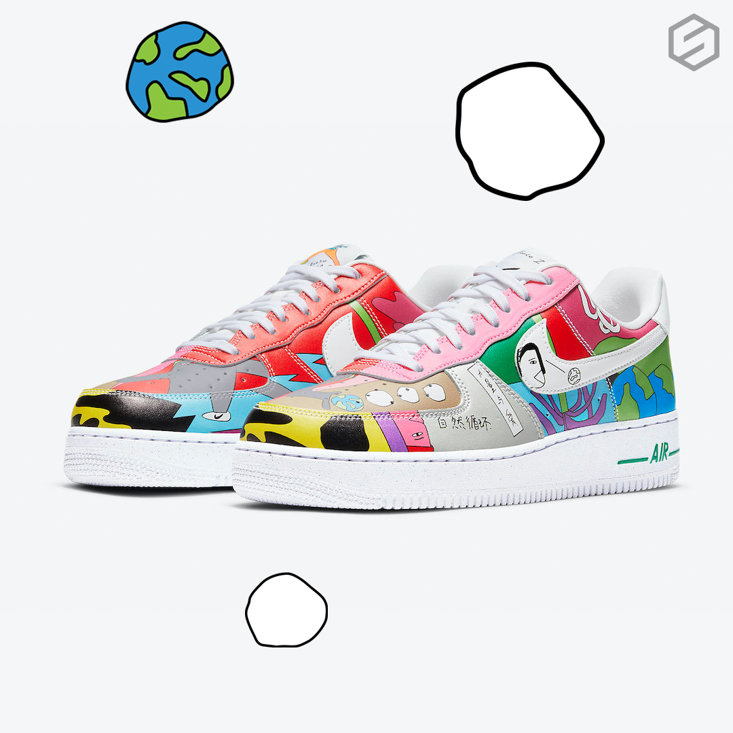 Nike imitating art. And once again allowing the Swoosh to sing.