Style
The Sportsman examines some of the best kits Umbro have on offer for the new season
Jack Porter
11:00, 18 Sep 2020

Umbro has a unique story. A century’s worth of narrative imbued in every cut, every shoe, every line.

The British brand has collaborated with some of the most heritage-rich football institutions in the United Kingdom. With the 2020/21 range of team shirts the brand has now produced, it has been reiterated that Umbro’s onus isn’t just on literally connecting the fan with the club. It is with the supporter, no matter the distance, with the history and the city or town from where each respective club derives. Each shirt is designed with a story with an identifiable local accent.

The Sportsman examines some of the best kits Umbro have on offer for the 2020/21 season, and gets under the skin of the shirts.

Huddersfield celebrates a strong, enviable history that has been taken to heart by Umbro for this home kit. In the 1920s, Huddersfield could certifiably claim to be one of the best sides in England, using their strong identity as a working man’s club for strong performances on the pitch. 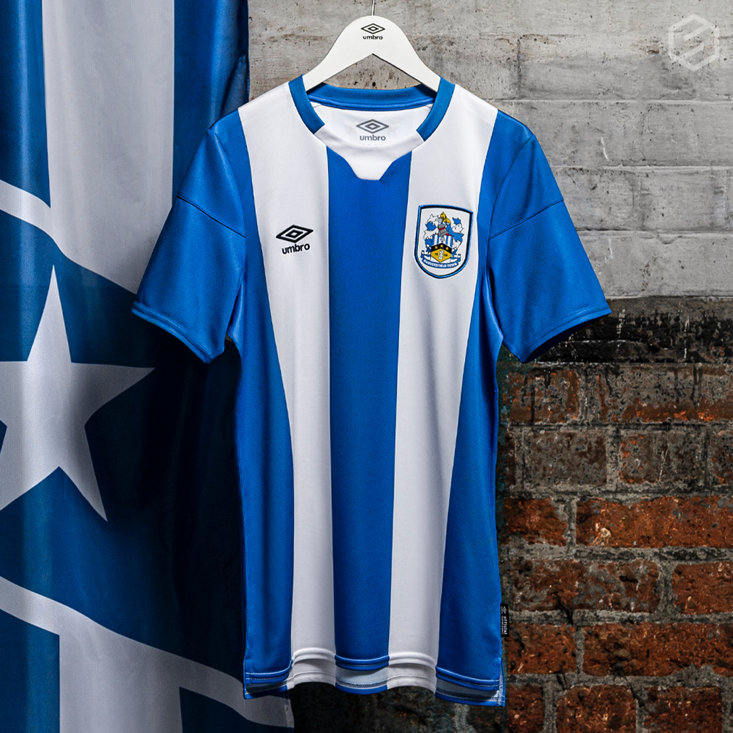 The Huddersfield Town side that won three league titles in the 1920s is one that is fondly and regularly reminisced. Therefore, it is unsurprising to see this period of the club’s history take an integral part of the kit’s design. The home jersey has those immediately identifiable wide French blue and white stripes to the body and a stylised two-colour rib neckline, full colour woven crest, stacked diamond embroidery, and dropped back hem with side vents Both the home shorts and white socks incorporate the French blue aesthetic, with the former incorporating a full colour woven crest, and the footwear emblazoned with Peacoat Blue HTAFC wording to the back and diamond to the front. Poignantly, almost a century after the most beloved period of the club’s existence, three stars to the back neck sign off to celebrate the achievements of great Huddersfield side.

One of the twelve founder members of the Football League, Burnley Football Club has been in existence for close to 140 years, and have worn their famous Claret for well over a century. There’s no moving away from the vivid colour scheme in Umbro’s latest incarnation of the home kit, which delves deep into history in order to bring a key episode in the club’s story to a new audience. 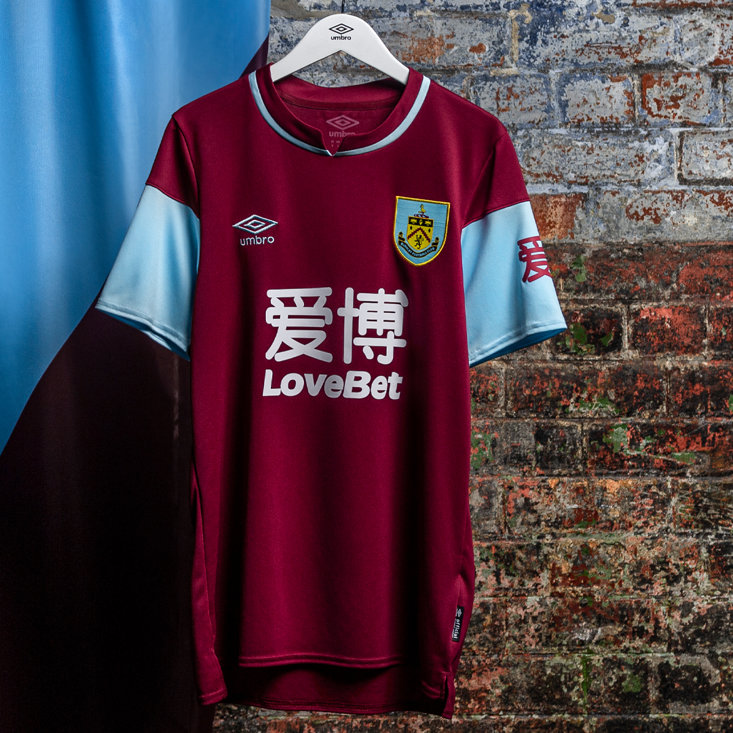 In the 1920-21 season the north-west side enjoyed a remarkable unbeaten run of 30 league matches to win the First Division title, that league record standing for over 80 years. This season’s Umbro Burnley home kit has been inspired by those champions, creating a classic jersey with a stylised collar neckline and a lower proportion of sky blue on the sleeves and, of course, that full-colour woven crest with the Royal Lion and Burnley’s ‘legs, hearts, minds’ motto as a bespoke back neck sign off. The bright, brilliant white shorts are accompanied with a claret contrast side, embroidered stacked diamond and that full-colour club crest.

Umbro have devised a real treat for Derby County’s away days. A striking Opal Blue ensemble with Peacoat dark blue sleeves and Ice Green tipping to the front shoulders oozes class, style, and power. The white ram outline on the left of the chest benefits strongly. 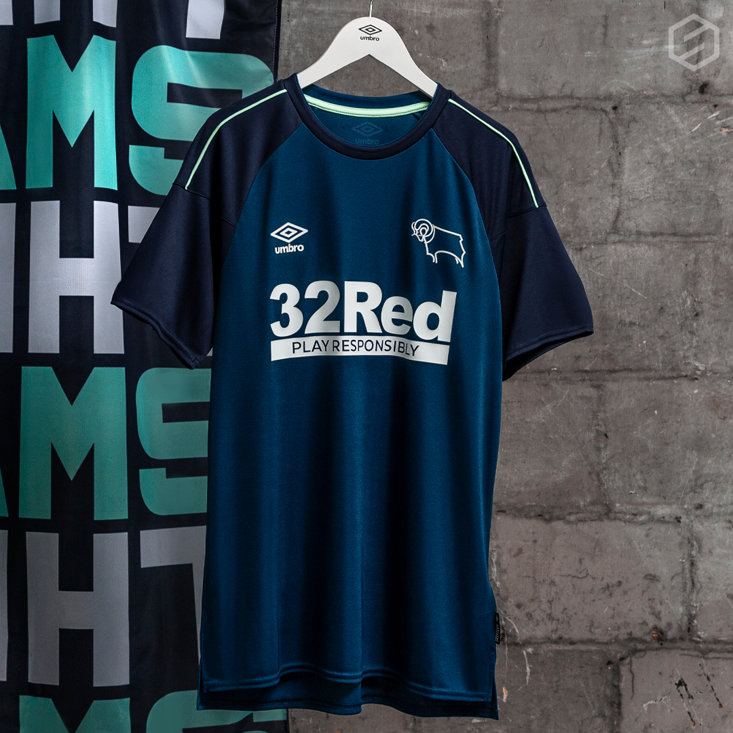 The strength of the design is maintained throughout, all the way from the stylised two-colour round neckline, through the same colour scheme shorts (with Ice Green contrast tipping to the side panel detail) to the Ice Green Away sock with Peacoat Dark Blue DCFC wording to back and stacked jacquard diamond.

The Bees have become many a punter’s favourite to finally rise up to the Premier League for the first time in their history and end a 75-year drought to experience top-tier tussles. Appropriately, Umbro have provided Brentford’s travelling uniform in a glorious Marl Fabric body, with plain fabrics sleeves to provide a contrast of textures. 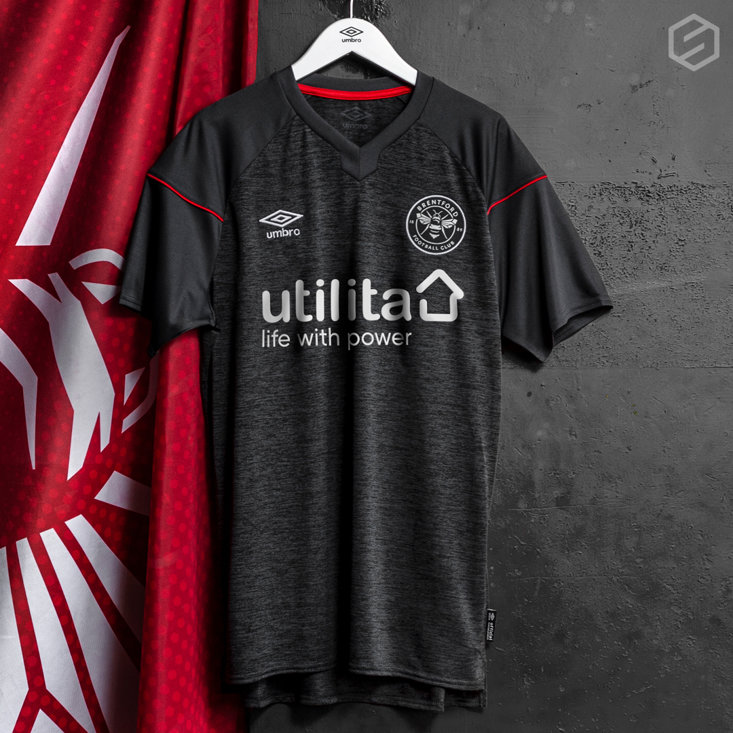 Most striking is a smart highlighted red tipping at the shoulders and on the Carbon Grey shorts and socks, subtly suggesting to opposition the danger of this Brentford side and their bloodthirsty desire for success at the expense of their Championship competitors.

As now one of the true premier south-coast clubs, Bournemouth and Umbro have embraced the Cherries sea-side style in a stunning Azure Blue away kit. The dropped hem jersey has incorporated the club crest into the colour scheme brilliantly, and is suitably complemented with a stylised neckline and AFCB back neck sign off. The colour scheme is enhanced with appropriate teal shorts with contrast side seam piping, the left thigh with that identifiable embroidered stacked diamond and the right that luscious incorporated tonal club crest. 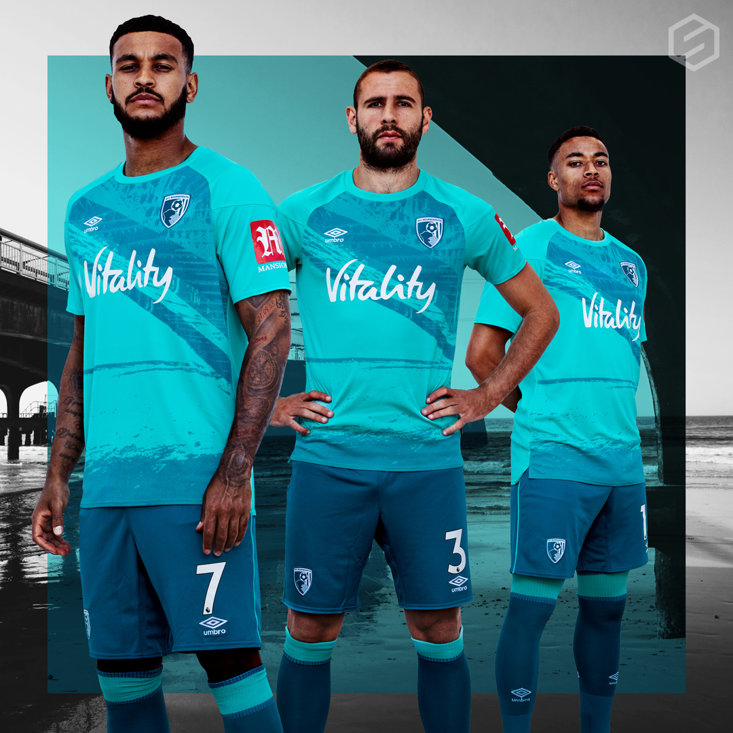 The pièce de résistance however comes, unsurprisingly, from the chest This season’s inspiration comes from the iconic Bournemouth pier. For the 2020/21 season, the Cherries now find themselves back in the Championship and have marked a return to the second division with elegant style and identity that will hopefully be matched with substance on the pitch.

Exactly 125 years ago the seeds of the east London club were planted. 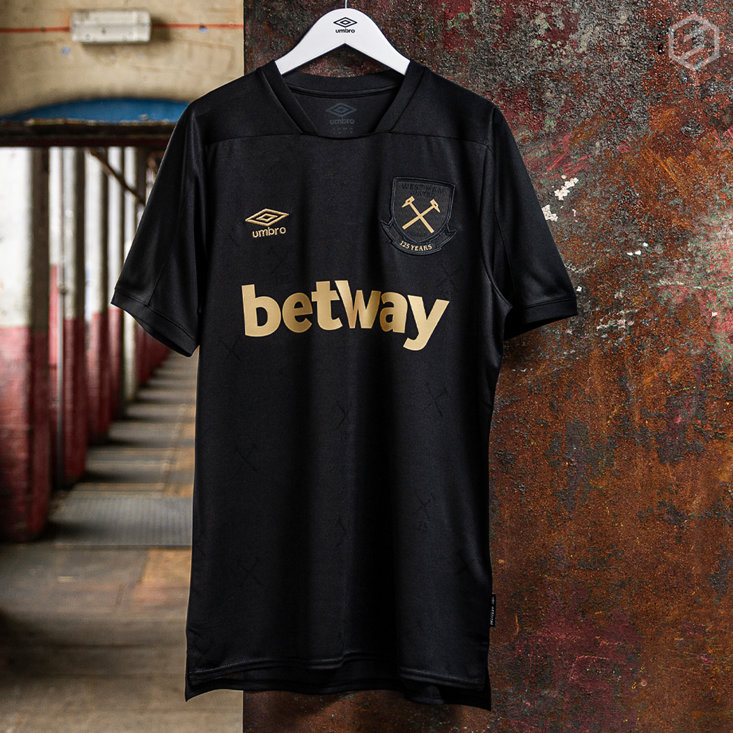 A handsome Black and Gold incarnation of the crest is augmented with a 125th-anniversary marker, the striking solid black body incorporating the tonal crossed hammers logo with 125 below. The jersey possesses a stylised rib neckline, stacked diamond gold embroidery, bespoke gold back neck sign off, and a dropped back hem with side vents and official licensed label to the side seam. The all-black shorts have been punctuated with the black and gold crest and stacked diamond gold embroidery and finished off by the solid black socks with yet more gold diamond to the front with WHU to the back. Happy Birthday, Hammers.