Ben Stokes was the inevitable hero once more this week as England beat South Africa in the Second Test at Newlands to level the series at 1-1. But the man of the moment had a helping hand from Zak Crawley along the way,

The 21-year-old Kent star produced a terrific rebound catch with England needing two wickets to win, initial palming Anrich Nortje’s edge into the air with his right hand before miraculously bringing it to comfort with his left. It was a stunning reflex action in the dying moments of an absorbing day of cricket and will live long in the memory.

It is far from the first stunning catch the sporting world has seen, though.

As DJ Khaled expressed so eloquently: “Odell Beckham, respect him, you can't check him.” OBJ launched himself (literally) into the sporting stratosphere with this Internet-breaking moment in 2014. In his debut NFL season with the New York Giants, the wide receiver stunned the MetLife Stadium, the Dallas Cowboys, and the watching world. On the first play of the second quarter, the then-22-year-old produced a mind-bending one-handed catch - falling backwards - from a 43-yard pass to give the Giants a 14-3 lead. It is one of the most iconic moments of recent NFL history that has transcended the sport.

You could hear the sheer disbelief in commentator Cris Collinsworth’s voice as he declared upon witnessing the magical moment: “That is absolutely impossible what he just did. That may be the greatest catch I’ve ever seen in my life.” Sometimes a particular move or method becomes synonymous with an individual: think the Cruyff turn, Fosbury Flop, the Ali Shuffle. Whenever this catch is ever replicated, there’ll be whispers of three little letters: O.B.J

FG ðŸˆ
@ForeverGridiron
Finally, our Number 1 NFL Moment of the Decade:
On November 23rd, 2014, Odell Beckham Jr. burst onto the scene with arguably the greatest catch in NFL history. â€œOdellâ€ turned into a verb, and this catch was even prominently displayed on the cover of Madden. Legendary.
0
6

Ken Griffey Jr is a bonafide baseball don. The recipient of 10 consecutive Golden Gloves through the 1990s for exceptional fielding performances, numerous plays could have been recorded in this list. We’re opting for the center-fielder’s almost wrist-breaking catch into the Kingdome wall for the Seattle Mariners in 1991 when denying Rob Sierra of the Texas Rangers an extra-base hit. There was no stopping Griffey as he launched himself into the boundary with just one thing on his mind - collecting the ball in that glove.

Griffey was left in visible agony after the feat of athleticism, and he would shatter his wrist four years later following another similarly exuberant play.

A divisive character if ever there was one. To take a well-known footballing mantra in order to describe Mr. Paolo Di Canio: hated, adored, hard to ignore.

But the Italian gained a whole host of admirers for his antics against Everton in 2000. Playing for West Ham, Di Canio produced not a world-class goal but an exemplary act of sportsmanship the like of which has rarely been seen at the top level of the English game.

With the scores tied at 1-1 approaching injury time at Goodison Park, the striker had the opportunity to net a winner for the visiting side after Everton goalkeeper Paul Gerrard crumbled to the floor yards out of his area with a dislocated knee. Rather than take his chance to net a virtually-unopposed clincher, Di Canio caught the ball and summoned help for the stricken Gerrard.

Supporters of the Merseyside club subsequently provided Di Canio a standing ovation, and he was later given a FIFA Fair Play Award for his actions. His sportsmanship wasn’t as easily swallowed by members of his camp, including gaffer Harry Redknapp and teammate Stuart Pearce.

"My God, the day he caught the ball at Everton with five minutes to go...We needed the points badly and instead of heading it in, he catches the ball so Gerrard can get treatment,” said Redknapp years later.

"Two minutes later I’ve got to do an interview live on Sky and the guy says to me: ‘What a great day for football.’

Match of the Day
@BBCMOTD
#OnThisDay in 2000, Paul Gerrard collapsed in the box with a knee injury leaving an open goal.
Rather than scoring, Di Canio picked up the ball and stopped play so the Everton keeper could receive treatment.
The West Ham forward won Fifa's Fair Play award for his actions ðŸ† 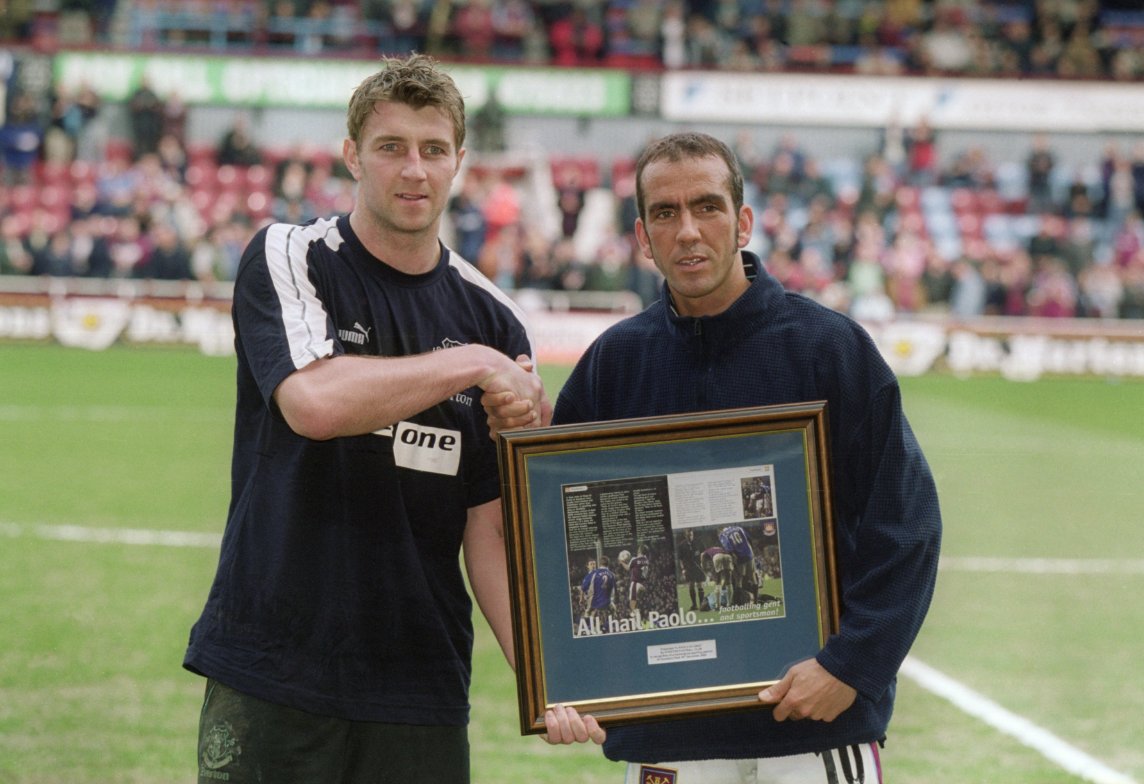 We go back across the pond to the USA for the most recent moment on this list and another reason why LeBron James can truly be considered one of the greatest players to ever lace up a pair of sneakers and take to the maple court. In November 2019, James was enjoying life on the west coast after moving on once again from the Cleveland Cavaliers in the 2018 off-season, opting to join the Los Angeles Lakers.

Playing away to the Oklahoma City Thunder, James provided another exhibition of genius. We’re going to go out on a limb and call it an ‘OBJ’. Receiving the ball high, James was at full arm and finger stretch to claim a long pass and propel it to teammate Kentavious Caldwell-Pope for a second-quarter buzzer-beating three-pointer. The Lakers would claim a 130-127 win, with the evergreen James registering 23 points and 14 assists.

To slightly paraphrase Magnus Magnusson, we’ve started (with cricket), so we’ll finish (with cricket). Specifically, the 2007 World Cup in the West Indies. Events such as this are where heroes are truly born, and in the Caribbean it was the turn of a Bermudan, one Russell Dwayne Mark Leverock.

Dwayne Leverock strolled onto the cricket pitch as a very large man. A full 20 stones worth of man.

In a game full of professionals and a wealth of worldly experience, Leverock helped epitomised the grit and determination of the plucky Bermuda amateur national side that were nestled alongside heavyweights Sri Lanka, Bangladesh and India.

Leverock had taken the wicket of Sri Lanka’s Kumar Sangakkara in their opening game but it was against India that he provided the prevailing image that still warms the cockles today, with every pound of that 20-stone frame coming crashing to the turf as he caught out Robin Uthappa in the second over of the game. In addition, and even more remarkably, though he is left-handed, Leverock managed to catch it with his right at full stretch. Every bit as stunning was his ungainly sprint around half of the field in celebration.

India would go on to win by 257 runs, and Bermuda would finish bottom of their group without a single win from their three matches.

That catch, however, has lived far longer in the memory, and in hearts.

ICC
@ICC
"Edged, and TAKEN! What a catch!"
Happy birthday to a man who took one of the @cricketworldcup's most famous catches, Bermuda's Dwayne Leverock! ðŸ™Œ
451
3546
x
Suggested Searches:
Tyson Fury
Manchester United
Marcus Rashford
Lewis Hamilton
F1
Air Jordan
More
football
Liverpool Have Three Weeks To Rescue Their Title Defence After...
It’s Pep Guardiola’s 50th birthday today, and the best gift the Manchester City boss could [ ... ]
horse-racing
Everything You Need To Know About The £5.7m Dubai World Cup...
On 21 January, one of the finest horse racing carnivals in the world kicks off as the Dubai World Cup [ ... ]
football
How Jimmy Hill's Strike Threat Turned £20 Footballers Into Multi-Millionaires
In January 2018, Mesut Özil signed a new contract with Arsenal Football Club. The German midfielder [ ... ]
tennis
The Incredible Story Of Mansour Bahrami, Tennis' ''Most Naturally...
“We are here to entertain,” insists tennis icon Mansour Bahrami. “If you want to be [ ... ]
football
Rafa's Facts, Mourinho's Respect, It's Football's Greatest-Ever...
It was the surest sign yet that Manchester United are back to cause trouble at the top. Jurgen Klopp’s [ ... ]
football
Why Man Utd Remain The Modern Giants, Even If Liverpool Are...
You can tell that football has changed a lot over the past eight years simply from observing some of [ ... ]
motorsport
Elfyn Evans Is Desperate To Make Up For His 2020 World Rally...
“I can’t repeat the exact words and how I felt at the time,” says Welsh rally driver [ ... ]
sports
The Cube, Swingball And The Home-Based Challenges To Get You...
Lockdown is here. Again. Once more the kids are off school and yet again we are left working from home [ ... ]
football
With Nine Teams In The Frame, Could This Be The Most Exciting...
Just four points separate second from seventh in the Premier League table, while leaders Manchester [ ... ]
football
'Big Fish' James Rodriguez Is Exactly Where He Needs To Be At...
James Rodriguez’s career so far has been a great big ‘what if’. Whereas some footballers [ ... ]
sports
''Hold My Beer'' - How Surfer Mikey Wright Leapt Into Action...
“Hold my beer” bellowed Mikey Wright as he tore off his shirt and charged towards the sea. [ ... ]
us-sports
The Headbutts, Fall-Outs And Four-Day Benders That Made Dennis...
They called him The Worm. It may now be over two decades since he last played at the highest level in [ ... ]
boxing
The Skipping, Sushi And 6am Starts Behind Canelo Alvarez's Billionaire...
Saul ‘Canelo’ Alvarez is not only one of the richest sportspeople on the planet, having [ ... ]
sports
Team GB Star Lutalo Muhammad's Guide To Sleeping Like An Olympian
Practice makes perfect, and Olympic athletes spend years honing their craft in pursuit of medal glory. [ ... ]
football
How Cheung Chi Doy Flew Solo To Become Hong Kong's Only European...
Sixty years ago, on 14 January 1961, two teams walked out at Bloomfield Road for a Saturday football [ ... ]
sports
The Top Motivation Tips To Keep Your 2021 Fitness Kick On Course
We are now getting stuck right into January and the new year, and with the first proper weekend behind [ ... ]
football
Remembering Josef Bican, The Only Footballer Cristiano Ronaldo...
It is the perennial argument.. Who is the greatest ever, is it Cristiano Ronaldo or Josef Bican? Ok, [ ... ]
motorsport
Lando Norris' Stunning McLaren 570S, £1.4m Track Test Cars And...
What were you doing at the age of 21? Finishing university, taking the first steps on your career ladder, [ ... ]
darts
Gerwyn Price Would've Quit Darts For A Wales Rugby Union Cap,...
Gerwyn Price dreamed of representing the Wales national rugby team. Life, though, works in mysterious [ ... ]
football
20 Years On, Is Eriksson's England Remembered For The Successes...
It was a time of relative success and front-page scandals. The FA’s decision to appoint England’s [ ... ]
football
Beckham's MLS Move Gets More Monumental Every Year, And Messi...
“I would like to play in the United States someday, it’s always been one of my dreams... [ ... ]
football
Cheers Bud, Messi Pays Respect To The World’s Best ‘Keepers...
Budweiser continues to celebrate Lionel Messi’s record-breaking 644th goal by sending every goalkeeper [ ... ]
football
No More Begging Bowls, Teams Like Marine Should Get 100% Of...
There was an inevitability about the 5-0 away win on the pitch, but Sunday’s third-round clash [ ... ]
sports
The Good, The Bad And The Downright Ugly, What Happens When...
Cardiff City Football Club is one of the most traditional organisations of a deeply traditional sport. [ ... ]
sports
Meet Milly Pickles, The Inspiring Para-Athlete With Five Million...
With five million likes and 204,000 followers on TikTok, and a brand deal with one of the UK’s [ ... ]
boxing
The Hard Work, Long Days And Big Meals Behind Tyson Fury's Incredible...
Tyson Fury has found solace in working out, discovering it is the thing that not only keeps him in shape [ ... ]
us-sports
How Kareem Abdul-Jabbar Brought The Lakers' Incredible 33-Game...
He towered at seven feet two inches tall. The sky-hook was in full flow. Once again the Los Angeles [ ... ]
motorsport
Biker Sam Sunderland Won't Let Covid-19 Kill His Dream Of Another...
It was back in 2017 when Sam Sunderland wrote his name into the record books, becoming the first Brit [ ... ]
football
James Rodriguez's Car Haul Includes £300k Worth Of Mercs, And...
James Rodriguez is an absolute Rolls Royce of a footballer and had Everton’s midfield purring [ ... ]
football
Heroes V Minnows, Legends V The Lowly, The FA Cup Third Round...
The magic of the FA Cup has been slowly dying, they say. There are the scattered fixtures and irritating [ ... ]