It can be hard to pinpoint the moment a sport enters the zeitgeist. Yes you have the rule makers - your James Naismiths, Webb Ellis’, and Alexander Cartrights - and your playing pioneers like W. G. Grace and Walter Camp, but each have their own detractors, questioned responsibilities and legacies.

There are no such quibbles in the world of modern surfing however; the patriarch can only be Duke Paoa Kahinu Mokoe Hulikohola Kahanamoku, ‘The Big Kahuna’, the first person to be inducted into both the International Swimming Hall of Fame and Surfing Halls of Fame, the man who once declared, “Out of the water, I am nothing.” He was, in short, the sport’s greatest ambassador.

“Duke never rode 20-foot Waimea,” legendary American surfer Fred Hemmings said, describing the Hawaiian’s impact. “He wasn’t a political leader, he wasn’t an entrepreneur, he wasn’t a great business man or a scholar. He was simply a great Hawaiian and great surfer. But as a result, he is the most revered Hawaiian icon of the 20th century.” 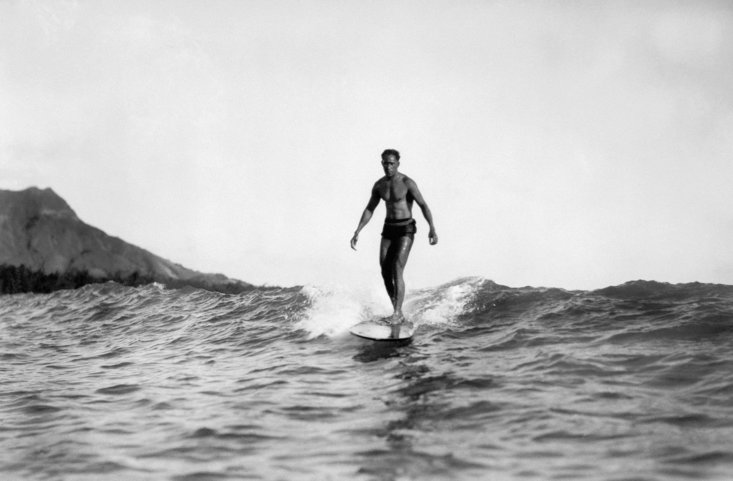 Born in Honolulu, Hawaii, the eldest of nine children, Duke Kahanamoku participated in five Olympic Games across twenty years in swimming events, becoming the first Hawaiian ever to win a medal at the Olympic Games. He took three gold medals (Stockholm 1912, Antwerp 1920), and two silver medals (Stockholm 1912, Paris 1924), refusing to go pro in order to compete, collecting medal after medal, setting record after record. And then, as a proud and visible Hawaiian he took surfing around the world, a sport that was a formative part of Pacific Islander-culture way before Lieutenant James King became the first recorded person to write about the art of it in Hawaii when he was completing the journals of Captain James Cook in 1779.

“I hardly remember whether I learned how to walk or how to swim first,” Kahanamoku once said. “One of the first things I remember is taking a cracker box board and pushing it ahead of me to swim out into the surf, using it like a surfboard. You can take a small board and go a long way. I used to swim out, turn around and come back through the surf.”

Today your brands on the beach are Wavestorm, Firewire, Channel Islands. At the highest level, pristine feats of craftsmanship. Kahanamoku used a 10ft solid redwood bark, and it ventured around the world with him, the inanimate Jean Passepartout to Duke’s Phileas Fogg. 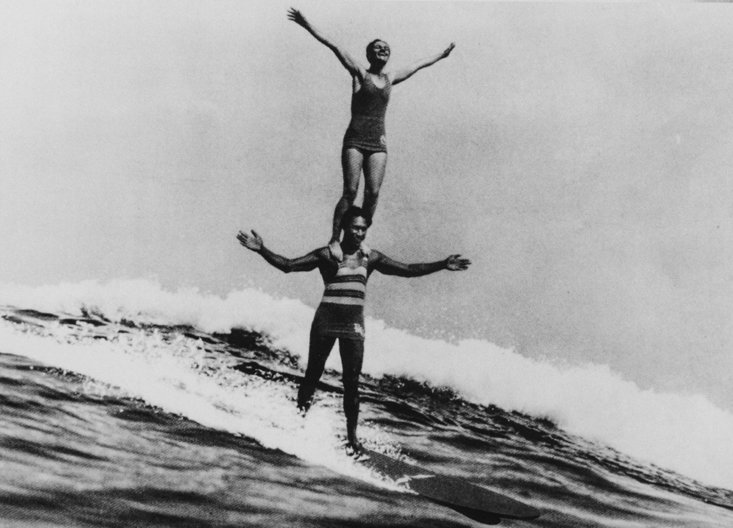 It took 60 years from the time Hawaii became a United States territory until it was declared a state on August 21st, 1959, the last of the 50. Therefore it is not an understatement to say that in its modern history, Duke Kahanamoku has been its most dominant character and figurehead:  he is simply the most influential surfer of all time. Not only did he boost surfing across the 130 plus Hawaiian Islands, but he was also one of the first to promote wave riding in Australia and California.

Kahanamoku was a modest, Hawaiian citizen, created and moulded with as much humility and unassumption, as talent. Certainly proud of his origins and always prompt to promote his homeland as a unique tourist destination, he was, in a phrase, Hawaii's Ambassador of Aloha. He served as sheriff of Honolulu from 1932 to 1961, re-elected 13 consecutive times and today there is a bronze statue in his honour located in Waikiki within the capital city. Despite his modesty and bashfulness (check out his appearance on This Is Your Life for a man truly unaccustomed to being away from the waves) Duke Kahanamoku taught members of the British royalty to surf, educated England’s Queen Mother Elizabeth in the hula, and dated Hollywood stars. He famously enjoyed a fruitful and productive relationship with Tarzan himself, Johnny Weissmuller. 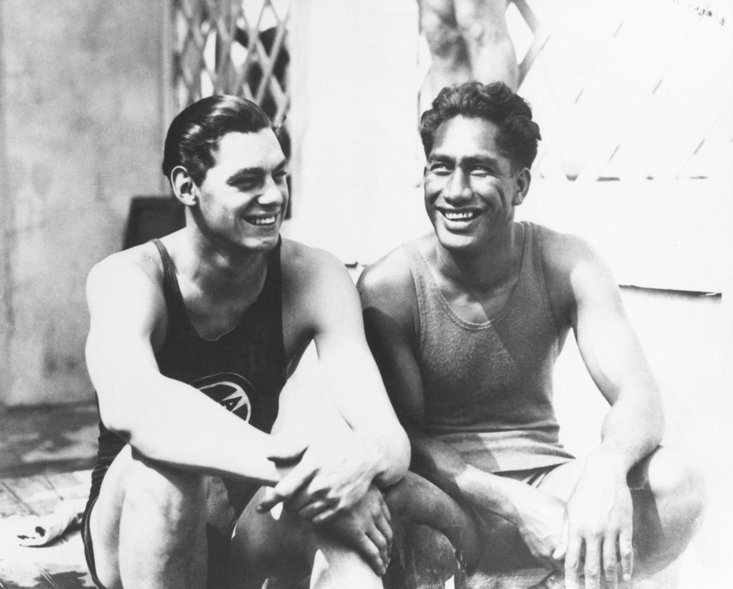 “He was pure Hawaiian: big, strong, gentle, humorous,” said friend Bill Morris of Kahanamoku.  The  6'1'' 190 pound Honolulu native was supreme on the surf and had the potential, in his bronze Adonis aesthetic, to be a star of the screen (indeed he starred in 25 films in Hollywood alongside chasing waves).

Aside from his Olympic golds, in 1917 came arguably his magnum opus on his redwood. Kahanamoku surfed Kalehuawehe, decreed the holy grail of Oahu’s south shore known for its infrequent breaks, for more than a mile: a mile! He had caught a wave at Castle’s and surfed along a 16-foot-long, 114-pound redwood board without a skeg on the 30 foot high wave. He took off at Castle's, continued through Publics and Queen's, before stepping ashore at Canoes. This tale is more than a description of a feat. Hawaii was his 30,000 foot garden, the waves the street behind his house. The North Shore’s gigantic waves were his playground, but his surfing skills weren’t showboating, this was skill with humility, passion before prestige. His influence extended well beyond the barrels. He founded the first surf club (Oahu, 1907), being voted Sheriff of Honolulu 13 times, being named the Official Greeter for Hawaii and he also established the first international surfing contest, The Duke Kahanamoku Invitational. 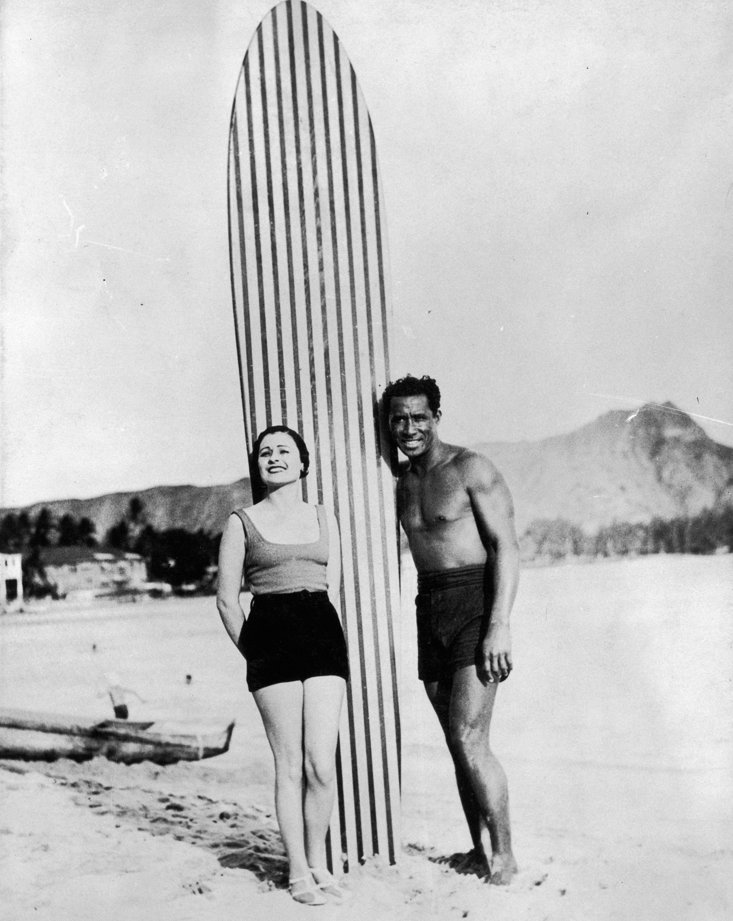 Few athletes have embodied the ethos and promoted their homeland as Duke Kahanamoku did with Hawaii. Perhaps Vitali Klitschko with Ukraine, Brian O’Driscoll and Ireland, Australian Cathy Freeman could be considered within the same bracket.

It is an element to the character that transcends talent. Being a great sportsman isn’t simply about achievement. An elevation comes from the dual distinction of paragon and proud, but unforceful patriot. When sports stars become sempiternal. But never before has one man and one location been so intrinsically connected.

The New York Times reported upon his death that many Hawaiians viewed their Duke as the fulfilment of the prophecy once issued by the revered Kamehameha “that before the native Hawaiian race died out, one man would bring it fame.” Duke Kahanamoku died on January 22, 1968, at the age of 77 from a heart attack, his funeral the biggest Hawaii had ever seen, but leaving no known biological children. Instead, his offspring can be seen on every beach and in every bay: from Surfrider to Superbank, Killerpoint to Kauai.