Sad news for us Fantasy Premier League fans as we won’t see any top-flight action until Saturday 14th September due to the international break.

But as we embark on a fortnight of dreary internationals, we’ve taken a look at some of the talking points from Gameweek 4.

Is Manchester City’s Sergio Agüero now essential? When it comes to consistency, he’s definitely your man.

The Argentinian genius leads the race for the Premier League Golden Boot once again with six goals in four games and has now scored with each of his last seven league shots on target for Manchester City. Ruthless.

The striker has now recorded 101 goals in 134 games for City under Pep Guardiola and following the final result his Spanish boss quoted, “He (Agüero) will die scoring goals.”

At 31-years-old, Agüero has now scored 99 Premier League goals at the Etihad - only Wayne Rooney at Old Trafford (101) and Thierry Henry at Highbury (114) have scored more at a single stadium in Premier League history. Some fine company for the City legend.

Back to the point though.

Like previously mentioned in our Gameweek 4 preview, it felt as though Sergio Agüero had been overlooked so far this season.

Before scoring a brace and providing a single assist against Brighton & Hove Albion, it felt as though Teemu Pukki and Raheem Sterling were taking the spotlight in FPL.

However, Agüero has proven critical once again like he does every season and is now the top mark scorer in FPL with 40 points.

Subsequently, the Argentine has already risen to £12.1m since producing his 16-point haul and over 150,000 managers have already made the plunge for the striker.

Ranked 3rd as the most expensive asset, Agüero will obviously damage your budget. However, you wouldn’t want to regret the decision with Norwich and Watford next up.

Sergio has produced a combined career total of six assists and 16 goals in 14 appearances against the two sides. 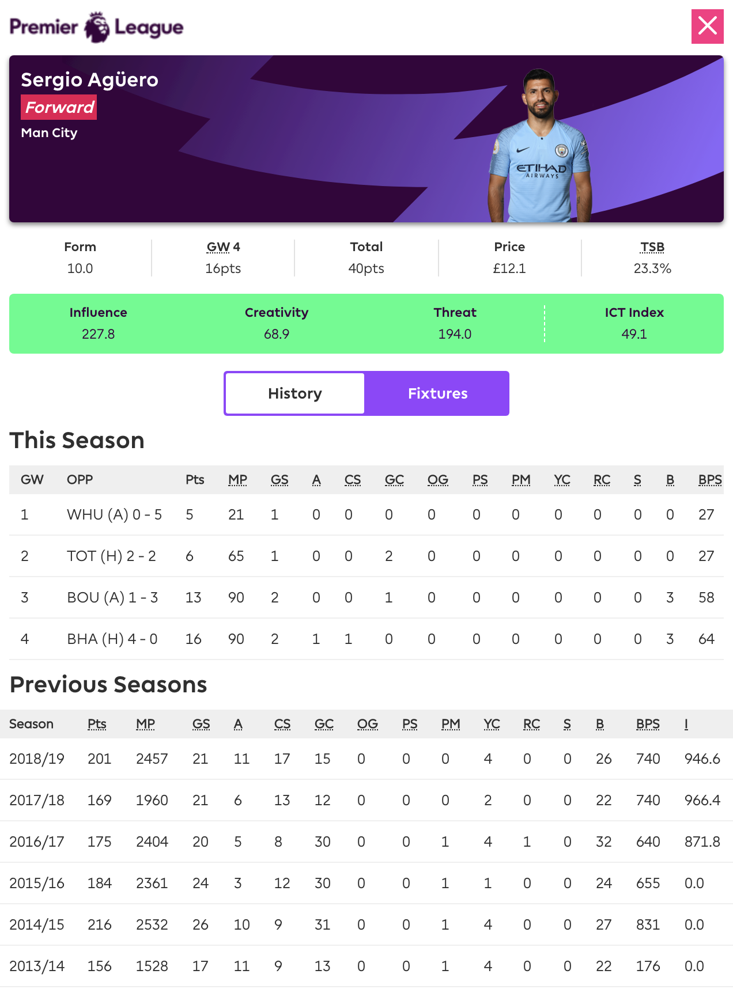 It also appears Jamie Vardy is picking up some solid form.

The Englishman has recorded three goals, one assist and five bonus points in his last two appearances, reaching a grand total of 24 FPL points.

His two proceeding fixtures come against Manchester United and Tottenham.

At first glance you might be thinking they look difficult on paper. Nonetheless, Vardy has a sublime record against the ‘Top Six’.

Vardy’s record against the ‘Top Six’ in all competitions:

The Foxes No.9 has supplied 10 goals and seven assists in 18 appearances combined against Manchester United and Tottenham, so don’t let the fixture fool you.

Brendan Rodgers appears to have made a huge impact having joined Leicester from Celtic towards the end of last season. Vardy has since gone on to record 14 goal involvements in 14 league appearances under the Ulsterman.

The Leicester forward will be feeling well-rested and fresh ahead of his return to Premier League action having retired from international football in 2018.

Gameweek 4 also saw the first returns of the season for Richarlison, Youri Tielemans, Nicolas Pépé and Callum Robinson which will be something to look out for in the coming weeks.

Callum Robinson will definitely be one for managers to keep an eye on if he can maintain his form.

The 24-year-old costs just £5.3m and is selected by a mere 0.6% of teams. Not only this, Robinson is positioned as a midfielder in FPL but is deployed as a striker under Chris Wilder.

The Republic of Ireland international plied the majority of his trade as a winger for Preston North End last season. Despite being injured for 19 league games, Robinson still managed 12 goals and three assists in 27 Championship games.

Positioned as a forward in all four games so far this season, hopefully, this will bolster the likelihood of more attacking returns to come following an 11 point haul with a goal, assist and a single bonus point.

Robinson would most likely have been on for more bonus points had Chelsea’s Tammy Abraham not produced his second consecutive brace in two gameweeks, picking up another 13 point haul.

On that note, Tammy Abraham appears to have cemented the role of Frank Lampard’s No.9 for the Blues.

With four goals in his 157 minutes of football, the 21-year-old appears to be gleaming with confidence.

Abraham has now risen £0.2m and is currently priced £7.2m, a value we expect to keep rising.

Although the London club faces two difficult opponents in Wolves and Liverpool coming up, it will certainly be interesting to see how the youngster will perform before more managers jump on the bandwagon.