Sports
Features
The franchise has been through a fair few failures on the way to becoming a behemoth
Kevin Stewart
16:01, 26 Oct 2019

What you don't tend to think about is sport - but there are a number of superheroes in Marvel's comic books with sporting themes. 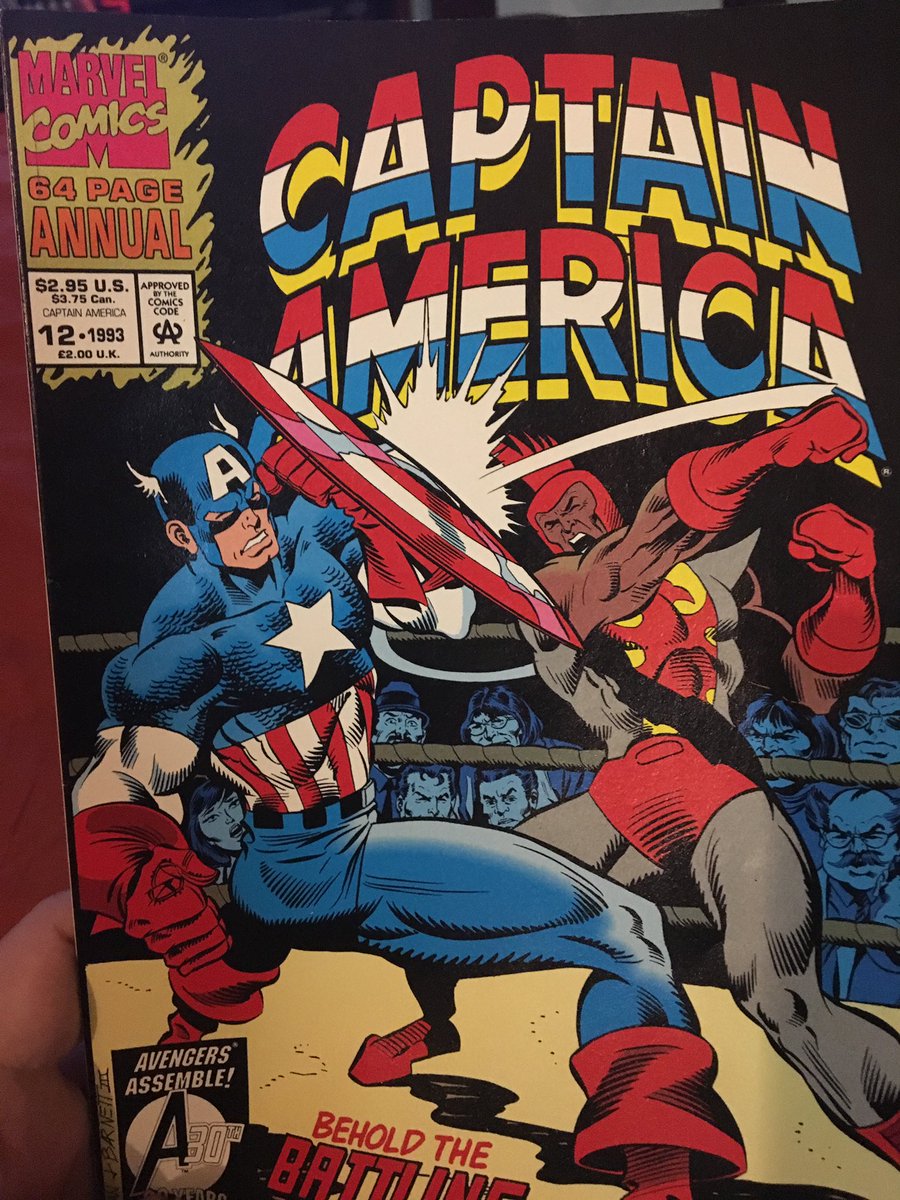 First up is Roberto Velasquez - a former boxer from Puerto Rico who never made it as a professional because of his small stature.

But he was given the opportunity to take part in a program that augmented his physical abilities, granting him super-strength and a degree of invulnerability.

He became so powerful that he could no longer fairly take part in the sport of boxing, after inadvertently killing another fighter during a bout.

At that point, he became the superhero known as Bantam - named after the weight class in boxing which, in turn, was named after bantam chickens - and he even wore boxing gloves as part of his costume. At one point, he even found himself fighting alongside Captain America himself, but he ultimately died during the Civil War story arc. 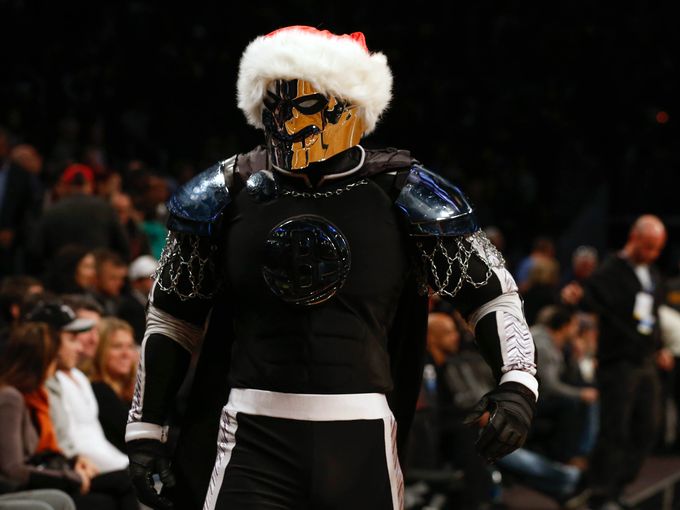 BrooklyKnight was created as part of a collaboration between Marvel Comics and the New York-based NBA team the Brooklyn Nets.

When Brooklyn was given an NBA team, they wanted to create a superhero mascot and, logically, they asked for Marvel's help to do so.

The result is the BrooklyKnight - a play on the word "Brooklynite", which is the name given to residents of Brooklyn.

While he didn't do much basketball-related stuff, he did have the Brooklyn Nets' logo on his chest - but he was ultimately adjudged to be "too scary" for children and wasn't really clicking with the older crowd, so he was retired after just two years. 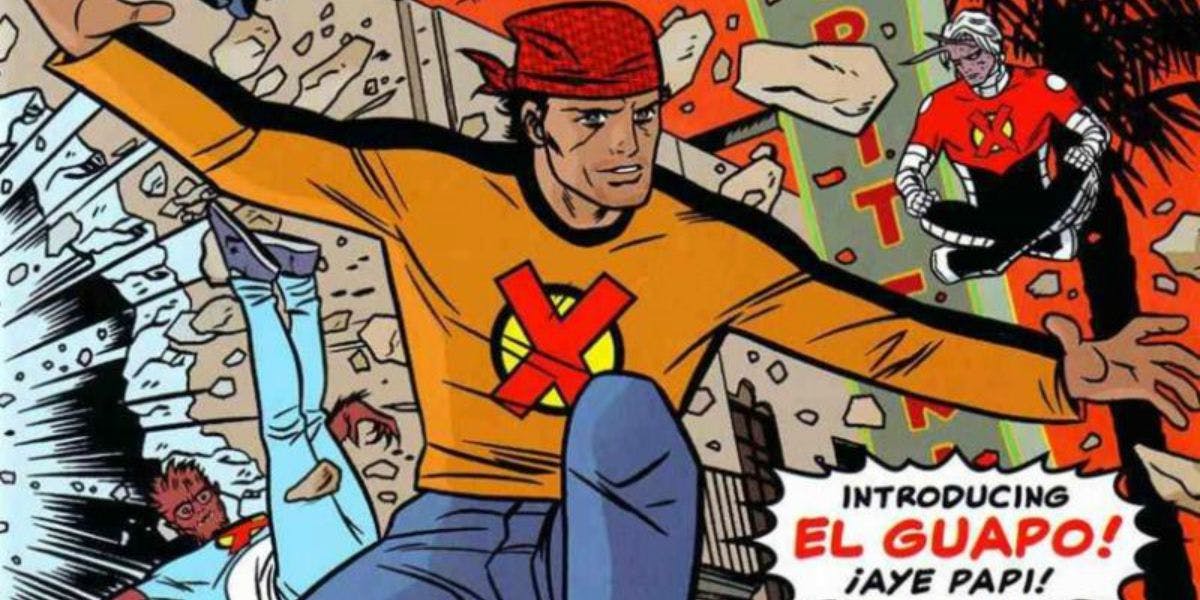 El Guapo is the alter-ego of Robbie Rodriguez - a mutant, like the X-Men for example - who has a sentient skateboard.

He's a former stuntman who was working on the X-Statix movie (X-Statix being a team of superheroes who were designed specifically to be media superstars) and who eventually joined the team itself after helping them to defeat a dangerous villain.

"El Guapo" translates literally from Spanish as "The Handsome", so he's undoubtedly a very campy joke character, but that was all part of the charm - in fact, he was specifically created as a way to poke fun at all characters who were created to capitalise on cool trends, such as skateboarding or surfing.

He died in ludicrous circumstances when he hummed a cursed song and his skateboard ended up impaling him.

Comic Book Resources
@CBR
Hope everyone has a great #SuperBowlSunday! Our money is, as always, on NFL SuperPro. 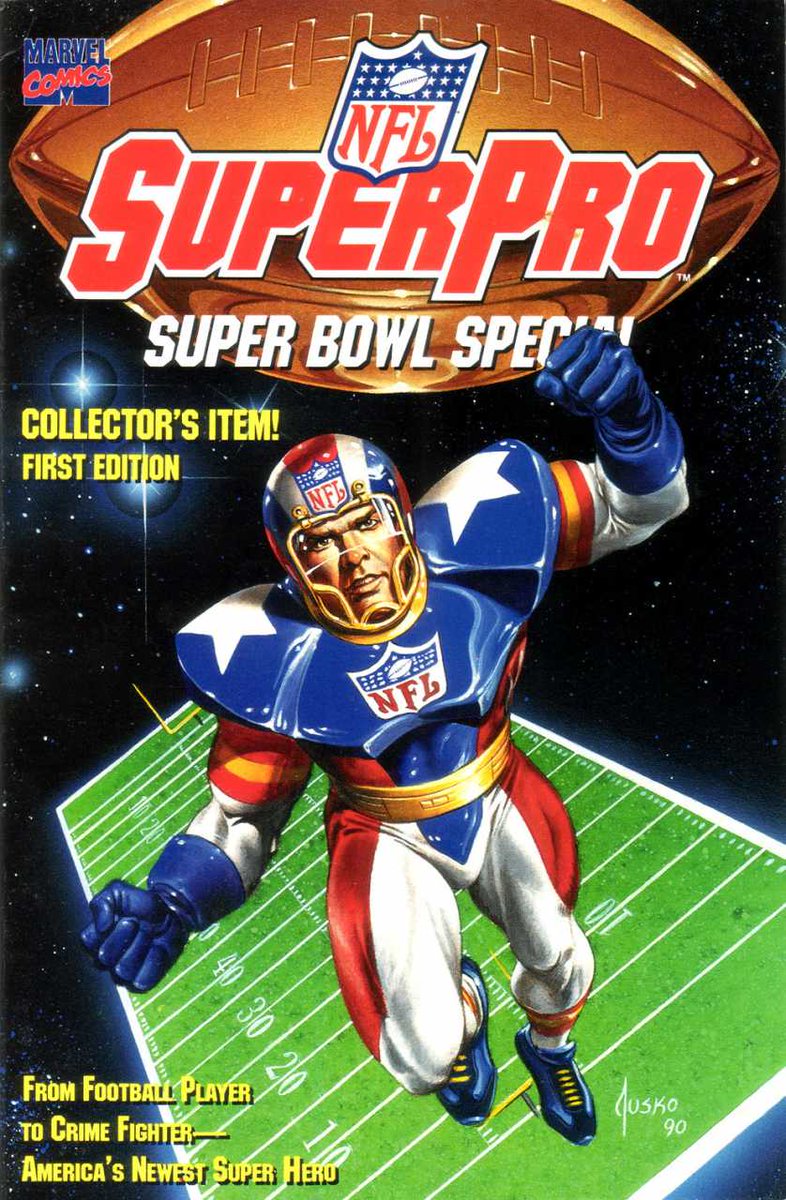 This guy is arguably the most well-known sports-themed Marvel character - and his superhero name is NFL SuperPro.

His real name is Phil Grayfield and he was created by Marvel in collaboration with the NFL. It probably won't surprise you that this American Football-themed character has quite a silly origin story.

But his superhero exploits only lasted 12 issues, and not even a guest appearance by Spider-Man was enough to prevent his cancellation. 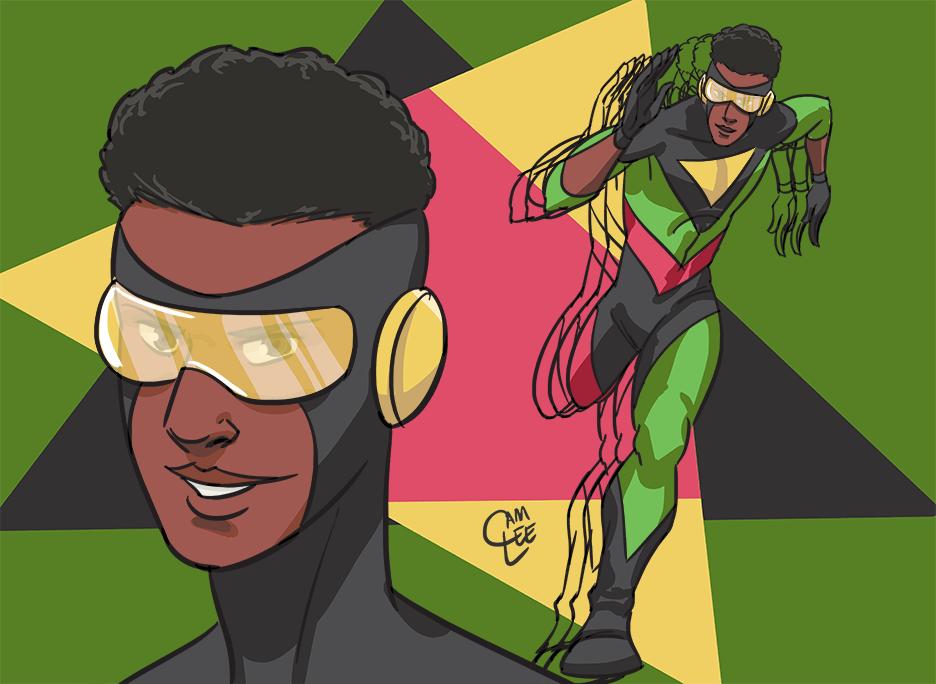 Delroy Garrett Jr. was an Olympic track athlete who ended up being kicked out of sport after he tested positive for steroids.

Downtrodden, he went on to join a cult to help build his faith. He ended up being given superpowers. What superpowers? Rather underwhelmingly, the strength and speed of three men! Yup, that really is the extent of it.

He became Triathlon and, surprisingly, he actually became an integral member of the Avengers - although his own initial assumption was that he'd been added to the team as a PR stunt.

Unbeknownst to Garrett Jr., his powers were actually taken from a previous Marvel character - 3-D Man, who also had the abilities of three men, and he would later adopt the 3-D Man moniker for himself.

More
football
Why You Should Still Have A Whole Lot Of Love For The League...
The League Cup needs some love. The unwanted and unloved fourth child of English football, without the [ ... ]
boxing
Born To Box: The Extraordinary Story Of Nipper Pat Daly
“They’ll laugh at you, son. Wait until you’re a little older.” It’s 1920s [ ... ]
boxing
Mia St. John - The Boxing World Champion Using Her Power For...
Mia St. John had a purpose in life. It was, in her own words, “to kick somebody’s ass”. [ ... ]
football
From The Ox To Dele Alli, Meet The Photographer Trusted By Football's...
Matt Gordon enjoys PlayStation with Liverpool’s Trent Alexander-Arnold, holidays with rising football [ ... ]
football
Robbie Fowler By Numbers: From L8 to Liverpool Legend
A ferocious storm straight from the heavens hit west London on Wednesday 22 September 1993. Craven Cottage [ ... ]
football
The Crazy, Continent-Crossing, Love Affair...Welcome To The...
5,031 miles. That's the exact distance that separates Aston in Birmingham from the Ghanain village [ ... ]
sports
From Kelly Slater To Serena Williams, The Athletes Stepping...
“We are facing a man-made disaster on a global scale.” Not our words but those of Sir David [ ... ]
football
Fenerbahce's Light Out Of The Dark: When Turkish Women Ruled...
Hearing the cry of ‘Women and children first!’ could understandably take you to that freezing [ ... ]
boxing
Finding Mike - All The Details So Far On Jamie Foxx's Tyson...
Mike Tyson is one of the most explosive and enigmatic sportsmen of all-time. His life has been one of [ ... ]
football
A Wonder Of The Footballing World: Celebrating The San Siro
The position as a modern-day Antipater would be unenviable if one was tasked with nailing down the Seven [ ... ]
boxing
Ken Norton, The Former US Marine Who Used A Self-Help Book To...
Not a soul in attendance, even in his adopted hometown, believed Ken Norton had a chance of beating [ ... ]
football
11 Points And Down In March: Derby County's Nightmare Premier...
It is the 39th minute at Pride Park in front of a roaring 33,000 strong crowd, the majority of whom [ ... ]
motorsport
184MPH On A Push Bike... Meet The Fastest Cyclist In The World
The scorching Bonneville Salt Flats of Utah. As far as the eye can see, the view is only a two-tone [ ... ]
football
Thanks Gaffer - The 19th Century Moniker Modern Footballers...
If you watched ‘The English Game’ on Netflix recently, the countless differences between [ ... ]
football
We’ll Raise Your 27-0 And Give You 31-0, The Biggest Hammerings...
Winning provides happiness. Losing provides wisdom. In football, it takes two sides to create history, [ ... ]
football
Joaquin, We Salute You - Real Betis Royalty Who’s Reigned For...
Eight years. That’s the average length of a professional footballer’s career. Average. Joaquin [ ... ]
football
From The Work Of Art To The Throwback, The Season's Best New...
Leeds United were the first. That’s right, the Elland Road club who are back in the Premier League [ ... ]
tennis
From Stockport Rebel To Hollywood Favourite, How Fred Perry...
“I’m a great believer in trying to look the part. It’s a fetish with me.” For [ ... ]
football
Germany Vs Bayern? Brazil Vs Exeter? These Are The Best Club...
The club versus country row has increased this century, with the soaring popularity of the Premier League [ ... ]
football
Bill Shankly - The Teenage Miner, Midfield Star And Managerial...
Bill Shankly wasn’t only a great football manager, you know. He was one hell of a player too. [ ... ]
tennis
Why John McEnroe Epitomises The Best In Tennis And How It Can...
It’s nearing the end of the long, hot summer. The year is 1984. You’ve got your Member’s [ ... ]
football
Toffees, Trophies And T90s: Rooney’s Football Journey Through...
Wayne Rooney’s right foot was explosive, like a traction engine as Alan Partridge would put it, [ ... ]
tennis
Remembering Little Mo, The Grand Slam Winning 'Killer In Pigtails'
No other player has arguably had such a profound effect on tennis, in such a tragically short space [ ... ]
cricket
It Pays To Be Patient: The Sportsman’s Ode To 140 Years Of Test...
Can you imagine trying to sell Test cricket to the public in 2020, if it was a new invention? Given [ ... ]
boxing
First Glimpse Of Greatness: When Ali Fought Fear With A Parachute...
As he sat there on bended knees in the middle of the aisle, the beads of sweat rolling down his forehead [ ... ]
boxing
The Newport Rocky: The Best British Boxer You’ve Never Heard...
Before David Haye and Tony Bellew, there was David ‘Bomber’ Pearce. A British cruiserweight [ ... ]
us-sports
Vince Lombardi: NFL Legend, Pursuer Of Perfection, Champion...
His name adorns American football’s ultimate prize thanks to his outstanding record as a coach [ ... ]
tennis
Serena Williams Doesn't Need The Grand Slam Record - She's Already...
There is no benefit in asking when it will end, just be glad that it’s happened. And still happening. [ ... ]
football
The Most Successful 'Failure' Ever? Reflecting On Bale's Time...
You’re worth £90million. At home - or rather in your stunning, sunny Spanish villa, hundreds [ ... ]
boxing
Rocky Marciano - The Epitome Of The American Dream And An Age...
With the Great Depression and Second World War firmly in its rear-view mirror, the 1950s saw the United [ ... ]