Zack George is the UK’s Fittest Man. This isn’t hyperbole. This is fact. The 30-year-old Leicesterian is a man of many muscles and, in 2020, he was officially certified with that title after conquering the CrossFit Open and proving himself to be the Best of British. CrossFit, for those unaware, is uber-exertion, the ultimate method of punishing and rewarding your body, a series of strength and conditioning exercises that can really test the limits. Some do it for fitness, Zack does it for sport.

And it all started with a promise of a PlayStation, with Zack’s dad vowing to purchase the games console for his overweight teenage son if he got moving and got active. The gym proved to be a drug and the PS controller was quickly put down for total body control. Then, the gruelling but rewarding world of CrossFit eventually proved too attractive.

Now he’s part of the G-SHOCK roster, a union he didn’t hesitate to commit to after being a lifelong fan of the brand. And he’s been putting the new GBD-H1000 through its paces during his many, many Crossfit training sessions and programming workouts. We caught up with Zack, between sessions, to discover how it feels to go from chubby teen to the UK’s Fittest Man, what it takes to get there, and how G-SHOCK continues to help his game...

For our everyman reader, what exactly is CrossFit?

CrossFit is a mixed training method which combines weight-lifting, gymnastics, and bodyweight movement. It’s literally brutal. It’s getting the movements done but with great technique and speed.

You feel as if you’ve been working out for 20 minutes when it could have only been two. When you go through such a short intense workout it’s just a strange sensation. You don’t hear any of the music that’s playing, you’re literally so focused and dialled-in to that workout and you’re just thinking about doing the reps as fast as possible and your transition time and good movement. Once the workout is done, that’s when the pain really kicks in and you’re on the floor. Then it stems to the longer, endurance stuff...

Obviously my training schedule is pretty intense. I train twice a day, Monday to Saturday and then I’ll do one training technique swimming session on a Sunday. At the beginning and end of the working week, it’s an hour-and-a-half fitness workout in the morning, and then I’ll go back to the gym late afternoon for another. On Wednesday the training will be followed by a swimming session. Saturday has a much quicker recovery time between sessions, just to get used to doing a lot of volume within a short space of time, like within a competition. 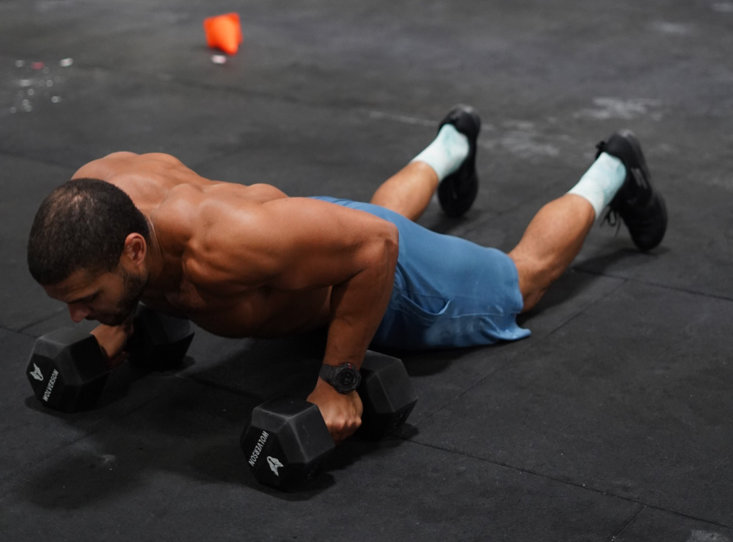 When did you know it could be a full-time profession?

It was only when I was about 24 when my dad showed me a video of the 2013 CrossFit Games. It was a swimming and bar muscle-ups event. Then they were doing hand-stand press-ups and all sorts. I’ll be honest I was also watching it thinking ‘What the hell is going on?!’ But these athletes looked ripped as hell, strong as hell, and they could do so many things across fitness. And straight away I knew that this is the sport I wanted to be in.

When you look back at those pictures of you as the ‘chubby child’ of 12/13, what do you think and feel?

It’s not something I regret. I feel it’s part of the journey that I’m proud of that has shaped me and my mentality now. At that age it gave me mental resilience and a goal. It really enabled me to focus on my health and nutrition, and consequently get into the fitness industry. It also gives a lot of people empathy that I’ve come from that background. People could have assumed that I’m just naturally genetically gifted,  but it’s the complete opposite. That background has given me a lot of grounding.

For me it’s just another step towards the Big Goal. That’s to be in the Top 10 at the CrossFit Games. The title was, however, a pretty surreal moment and took a couple of months to sink in, to realise what I had achieved, and to enjoy it. Your body is in such peak condition during the Open that, when it’s over, it goes on a massive downer.

The end goal is to get on that podium. You shouldn’t achieve a goal and stop there. Set the next one straight away. It’s goals leading to goals. 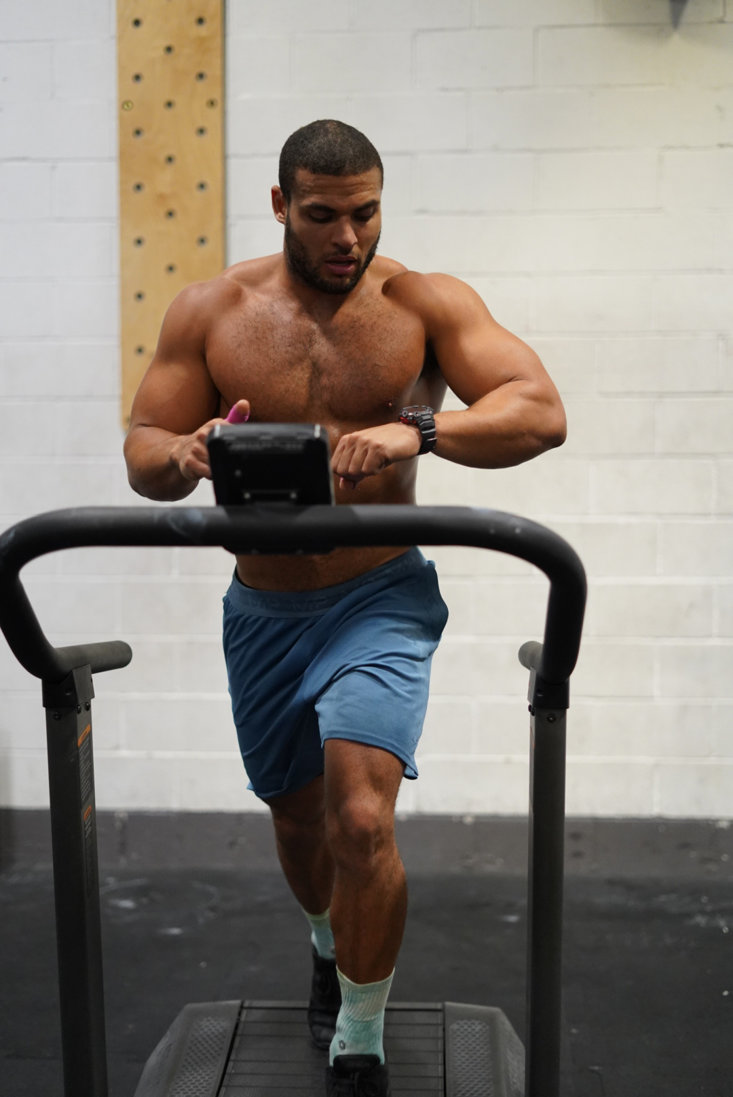 How has G-SHOCK benefitted the UK’s Fittest Man?

I’ve always been a massive fan of them, the durability and the chunky style. I always remember as a kid I had about seven of them, all different colours, including a love-it-or-hate-it purple and yellow. It’s been a brand I’ve really loved so it was natural for me to tie in when they brought out the fitness watch. It’s become an amazing feature for my training. It’s virtually bomb-proof, I don’t ever have to worry about breaking it or taping it up for my routine, and it’s solar-powered - from both natural and artificial light -  so I don’t have to worry about charging it! Importantly, the style of it means that I don’t just wear it as a training watch, but as a fashion watch. It’s pretty easy to endorse a brand when you were in love with them beforehand!

So you have to be a super-duper elite athlete to enjoy all the GBD-H1000 advantages?

Not at all, even for the beginner - many of whom I see come through my gym - the basic stopwatch function is great for interval routines or AMRAPs (an acronym popularised by CrossFit that stands for “As Many Rounds As Possible”), and setting goals for splits. It fits really well to mobile phone apps. In no way do you have to be an ‘elite athlete’ to benefit from the numerous features, it's scalable to everyone.

Personally, I have to mention, I use my phone, a lot. And I lose my phone...A LOT! But with the G-SHOCK, there’s a feature where you can call your missing phone with a special ringtone, even if it’s on silent. That’s certainly benefited me, a lot!

x
Suggested Searches:
Tyson Fury
Manchester United
Marcus Rashford
Lewis Hamilton
F1
Air Jordan
More
sports
''Hold My Beer'' - How Surfer Mikey Wright Leapt Into Action...
“Hold my beer” bellowed Mikey Wright as he tore off his shirt and charged towards the sea. [ ... ]
us-sports
The Headbutts, Fall-Outs And Four-Day Benders That Made Dennis...
They called him The Worm. It may now be over two decades since he last played at the highest level in [ ... ]
boxing
The Skipping, Sushi And 6am Starts Behind Canelo Alvarez's Billionaire...
Saul ‘Canelo’ Alvarez is not only one of the richest sportspeople on the planet, having [ ... ]
sports
Team GB Star Lutalo Muhammad's Guide To Sleeping Like An Olympian
Practice makes perfect, and Olympic athletes spend years honing their craft in pursuit of medal glory. [ ... ]
football
How Cheung Chi Doy Flew Solo To Become Hong Kong's Only European...
Sixty years ago, on 14 January 1961, two teams walked out at Bloomfield Road for a Saturday football [ ... ]
sports
The Top Motivation Tips To Keep Your 2021 Fitness Kick On Course
We are now getting stuck right into January and the new year, and with the first proper weekend behind [ ... ]
football
Remembering Josef Bican, The Only Footballer Cristiano Ronaldo...
It is the perennial argument.. Who is the greatest ever, is it Cristiano Ronaldo or Josef Bican? Ok, [ ... ]
motorsport
Lando Norris' Stunning McLaren 570S, £1.4m Track Test Cars And...
What were you doing at the age of 21? Finishing university, taking the first steps on your career ladder, [ ... ]
darts
Gerwyn Price Would've Quit Darts For A Wales Rugby Union Cap,...
Gerwyn Price dreamed of representing the Wales national rugby team. Life, though, works in mysterious [ ... ]
football
20 Years On, Is Eriksson's England Remembered For The Successes...
It was a time of relative success and front-page scandals. The FA’s decision to appoint England’s [ ... ]
football
Beckham's MLS Move Gets More Monumental Every Year, And Messi...
“I would like to play in the United States someday, it’s always been one of my dreams... [ ... ]
football
Cheers Bud, Messi Pays Respect To The World’s Best ‘Keepers...
Budweiser continues to celebrate Lionel Messi’s record-breaking 644th goal by sending every goalkeeper [ ... ]
football
No More Begging Bowls, Teams Like Marine Should Get 100% Of...
There was an inevitability about the 5-0 away win on the pitch, but Sunday’s third-round clash [ ... ]
sports
The Good, The Bad And The Downright Ugly, What Happens When...
Cardiff City Football Club is one of the most traditional organisations of a deeply traditional sport. [ ... ]
sports
Meet Milly Pickles, The Inspiring Para-Athlete With Five Million...
With five million likes and 204,000 followers on TikTok, and a brand deal with one of the UK’s [ ... ]
boxing
The Hard Work, Long Days And Big Meals Behind Tyson Fury's Incredible...
Tyson Fury has found solace in working out, discovering it is the thing that not only keeps him in shape [ ... ]
us-sports
How Kareem Abdul-Jabbar Brought The Lakers' Incredible 33-Game...
He towered at seven feet two inches tall. The sky-hook was in full flow. Once again the Los Angeles [ ... ]
motorsport
Biker Sam Sunderland Won't Let Covid-19 Kill His Dream Of Another...
It was back in 2017 when Sam Sunderland wrote his name into the record books, becoming the first Brit [ ... ]
football
James Rodriguez's Car Haul Includes £300k Worth Of Mercs, And...
James Rodriguez is an absolute Rolls Royce of a footballer and had Everton’s midfield purring [ ... ]
football
Heroes V Minnows, Legends V The Lowly, The FA Cup Third Round...
The magic of the FA Cup has been slowly dying, they say. There are the scattered fixtures and irritating [ ... ]
sports
The Diet Plans To Suit All Shapes And Sizes, From 5/2 To Fasting...
The New Year’s festivities have been and gone, and Christmas is a distant memory, at least until [ ... ]
motorsport
The Major Milestones Behind Lewis Hamilton's Relentless March...
Lewis Hamilton. His name is Lewis Hamilton. And there’s a million things he’s done. But [ ... ]
us-sports
11 NBA Titles And A 70% Win Rate, Phil Jackson Is The Best Coach...
There is simply no other who can touch him. He taught Jordan, Kobe, Shaq, Fisher, Pippen, Rodman. He [ ... ]
football
Big-Game Belief Proves City Are The Real Deal And United Are...
Manchester City are going to Wembley again. Manchester United are fielding questions about their readiness [ ... ]
boxing
Anthony Joshua Is The Selfless Sports Star We All Need In Our...
We need sport more than ever right now. We need it to distract, to entertain, to lift our mood and help [ ... ]
football
Thirst, Dedication, Craft, Bravery, Words That Define The Genius...
Even Gianluigi Buffon and Jan Oblak couldn’t stop Lionel Messi, but they got a little something [ ... ]
football
Long Live Le King! Why Bruno Fernandes Is Manchester United's...
Manchester United are flying. Ole Gunnar Solskjaer’s men have transformed themselves from mid-table [ ... ]
boxing
Canelo Alvarez, The Superstar Who Makes Golf Shirts And A Panda...
What would you spend your money on if you were one of the richest sportspeople on the planet? Saul 'Canelo' [ ... ]
boxing
Heroin, The Mob And A Left Jab From Hell: The Tragic Tale Of...
“One day they’re going to write a blues song about fighters. It'll just be for slow [ ... ]
sports
Baby Steps, Kindness And Motivation, It's Our Top Tips To Get...
You were doing so well. Lockdown had you in the best shape of your life. And then came Christmas. To [ ... ]