"If I had a son who wanted to be a fighter and I couldn't talk him out of it, the only man I would let train him is Angelo Dundee."

That was the assessment of legendary broadcaster Howard Cosell on a man who led some of the greatest pugilists to glory inside the squared circle. Muhammad Ali, George Foreman, Sugar Ray Leonard, Jose Napoles, Carmen Basilio and many more have benefitted from the wise teachings of Dundee, a man whose career in boxing began in the dying embers of World War Two and spanned for another 50 years.

A mainstay in the corner of Ali for most of the great’s glittering career, he averted Leonard from disaster against Thomas Hearns, guided a 45-year-old Foreman to one of the greatest individual comebacks in sports history and transformed Napoles into one of the slickest welterweights to ever lace up a pair of gloves.

Dundee was an affable, honest and honourable man in a sport where such traits were a rarity, and with his short stature and thick horn-rimmed glasses, you’d probably mistake him for being an accountant rather than one of the greatest ever professors of the sweet science. He was also a master motivator and cornerman who never tried to mould his fighters into something they weren’t, instead honing in on their natural talents. “Training fighters is like trying to catch a fish. It’s technique, not strength,” he would say. Never was that more obvious than it was with his most famous charge; Ali. Initially brought in as a man tasked with keeping Ali on the straight and narrow after his 1960 gold medal win in Rome, it would eventually blossom into one of the most famous athlete/coach partnerships across the whole of sport. Aside from his boxing prowess, one of Ali’s biggest talents was his mouth, and Dundee realised early on in their partnership that the brash, outspoken heavyweight shouldn’t be reined in (he gave Ali the nickname ‘the Louisville Lip’ for a reason). Throughout Ali’s career, whether it was joining the Nation of Islam or refusing induction in to the Army during the Vietnam War, Dundee always stuck by ‘his kid’, and remained within his inner circle when many white Americans across the nation considered him an enemy of the state.

Ali is arguably the best prizefighter to step foot in the ring, but without Dundee at his side his career might have been much different. In 1964, when challenging Sonny Liston for the world title, Ali was blinded by, allegedly, a substance on Liston’s glove - panicking that he needed to tear off his gloves and end the fight, Dundee gave him some sage advice… “Run!” Ali kept moving until the burning in his eyes cleared, then beat Liston hopelessly and the rest is history.

He might not have even had the shot at Liston had some quick thinking from Dundee not saved him against Henry Cooper a year earlier, when Cooper bludgeoned Ali to the canvas with Enry’s Ammer. Dundee tore a hole in Ali’s glove, alerted the referee that it needed to be repaired and gave the up and coming heavyweight the vital seconds he needed to recover and eventually win the fight. Dundee’s career was full of little moments like these - where his genius was the fine line between victory and defeat. What would Ali’s career have looked like had he been KO’d by Cooper so early on? 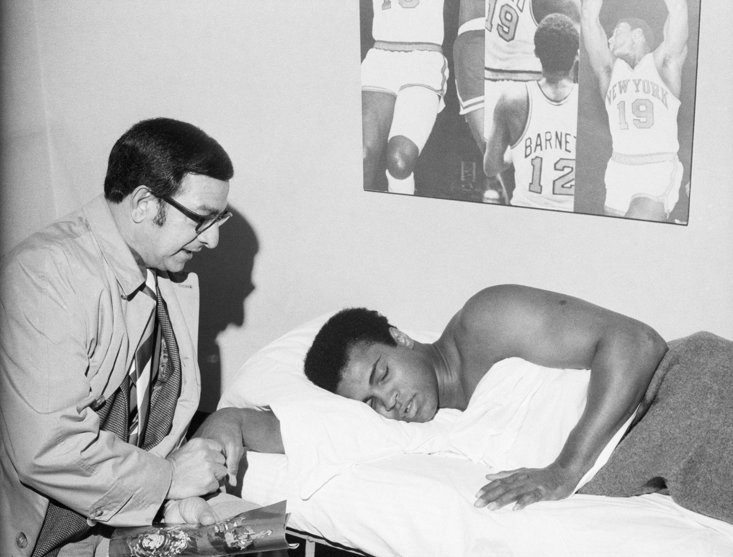 The two remained close friends and Dundee would still refer to Ali as “my kid” until he passed away on 1 February 2012, aged 90. In a testament to how beloved the trainer was, hundreds of mourners, including Ali, turned up to his funeral. Speaking on behalf of Ali, who was suffering with Parkinson’s Disease, his wife Lonnie said, “He used to call us all the time and say it doesn't cost nothing to be nice... It was like his mantra.

“Whenever we saw Angelo there was a smile on his face. He was always a happy guy.”

Inducted into the Boxing Hall of Fame in 1992, Dundee trained 15 world champions in total, and while he always let his fighters shine, preferring the solitude of the shadows, he is responsible for some of the most magical nights in the ring. Simply put, Dundee is stitched into the very fabric of 20th century boxing.