It’s hard to believe when stood in the LNER Community Stadium, the new home of the York City Knights, that just five years ago the club were teetering on the brink of existence.

The shimmering glass exterior, bright new seats and flawless playing surface of the 8,500-capacity stadium would not look out of place in the Betfred Super League, a promised land that those in charge of the club make no secret of wanting to reach.

In fact, such is the trajectory of the north Yorkshire club, that chairman Jon Flatman sees those dark days of 2016 as ancient history.

Indeed, it is difficult to dismiss the Knights’ bold ambitions for the future as mere ‘hope’.

They backed up their surprise 2018 promotion with a remarkable run to the Betfred Championship play-offs, have signed a raft of Super League experience for the 2021 campaign, and in James Ford they have one of the most respected and sought after coaches in the British game.

With the off-field infrastructure now in place to meet the ambition on the pitch, Flatman feels that after a few years of steady building, the club is in a position to take the next step.

Whilst the new stadium is a huge statement of intent for the club, it’s just one part of an investment totalling close to £60m by the council, York University and private investors that includes a brand-new training facility.

“It’s about barriers, barriers to the next level in terms of the coaching role, which is about taking a group of men and making them better players in this example. There are many different conduits to making that happen, there’s the individual themselves, there’s the facilities, there’s the ability of the people you’re putting into the system, and a whole culture you create around that. And no one part of that is the ultimate, it needs all of those different parts to progress at the right stages and steps forward.”

A big part of that culture takes root from the attitudes and philosophies of head coach Ford, a former York player himself who has been nothing short of a revelation since turning his hand to coaching.

Indeed, the litmus test for that culture may come this season. With the Knights in their new home, with a number of high-profile signings, rugby league’s perennial over-achievers have lost their underdog tag and are undoubtedly now on the radar of the Betfred Championship’s big hitters. And Ford understands the pressure that comes with this new territory.

“I’ll probably have to think of a different pre-match interview now,” he says. “We have signed some high-profile players, we’ve got some great facilities, I keep telling everyone how well our preparation is going, I’m not going to sit here and say we’re the underdogs and we’ll do well to stay up. There’s some pressure on us to succeed but pressure is a privilege and we’re looking forward to the challenge.” 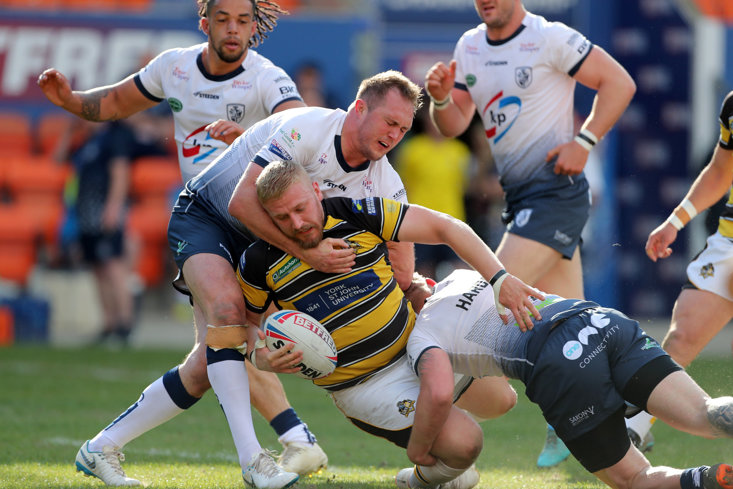 Whether the Knights can fulfil that Super League ambition in 2021 remains to be seen. The fiercely-competitive Betfred Championship season gets underway in April, and with only one promotion spot up for grabs, York are one of a number of clubs who will fancy their chances.

There is no doubt, however, that the resurgence of the Knights, and the construction of the new community stadium is something that the entire City of York will benefit from, as Flatman points out.

It is a sign of the times, of course, that those 8,500 seats will remain empty for Thursday's inaugural fixture at the new stadium against Hull FC as well as the first few rounds of the season. But with fans set to return from May, Flatman thinks the emotions will be mixed the first time the turnstiles click.

“I’m not really sure, it’s a difficult one, I’ve not really got that far,” he admits. “I hope to be here to see it. I think the health of the nation is really important, in the midst of this situation there will be some very important people who won’t be here to see it, who we would have expected to be here. So I think our thoughts will be with them. I think it will be a feeling of excitement, a little bit of sadness for those not here, but an exciting time.”

You can watch York open their 2021 campaign live and exclusive on The Sportsman when they take on Sheffield Eagles in the Betfred Challenge Cup on Friday 19 March from 19:45.

Be sure to watch the full rugby league season launch on the Our League service from 7.45pm on Wednesday 9 March.