Sports
Features
Some of the greatest names in sport have been characterised in famous publications
Kevin Stewart
16:00, 03 Nov 2019

On countless occasions over the years, stars from the real world have appeared in comic books - Barack Obama appeared alongside Spider-Man and Eminem came together with the Punisher in Marvel Comics, for example.

A number of sports stars have also been immortalised in comics, so The Sportsman has decided to take you through 10 of the best examples.

robliefeld
@robertliefeld
DC officially turn the lights out on January with this SPINNER RACK SPOTLIGHT on perhaps the greatest single comic book ever produced, Neal Adams magnum opus, SUPERMAN vs. MUHAMMAD ALI, Jan. 31, 1978! A wonder to behold. Got mine at the liquor store near my house. 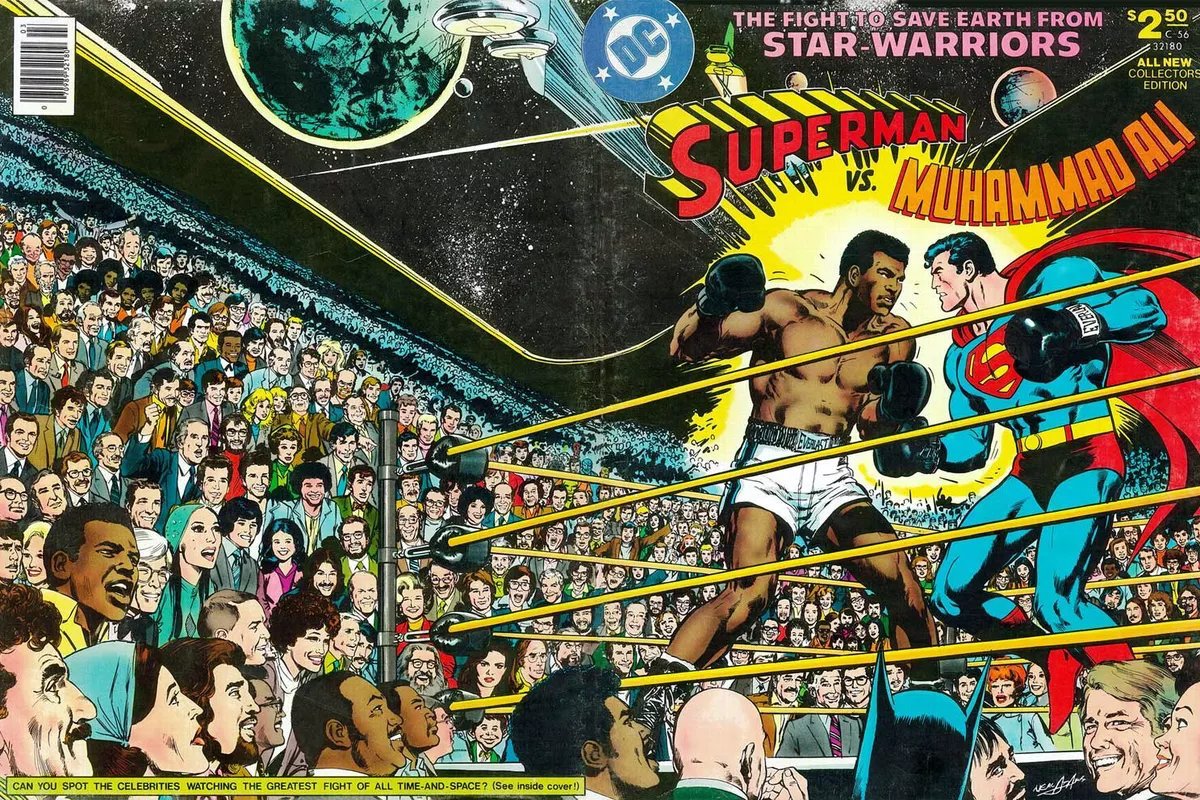 This is probably the most famous example of a sports star appearing in a comic book - and it occurred in DC Comics back in 1978.

The comic was called Superman vs. Muhammad Ali - and while it did see the two forced to face off in a boxing match (which saw Ali winning comfortably as Superman was depowered at the time), it also saw the iconic pair teaming up to fend off an alien invasion.

NBA Jam (the book) is OUT NOW!
@nbajambook
Charles Barkley admonishes Godzilla for breathing fire on the basketball in the middle of their game, 1993.

In 1992, Nike ran a TV commercial in which a giant-sized version of NBA star Charles Barkley challenged Godzilla to a game of basketball on the streets of Tokyo.

A year later the commercial was adapted into a comic by Dark Horse, with the location being switched from Japan to California. 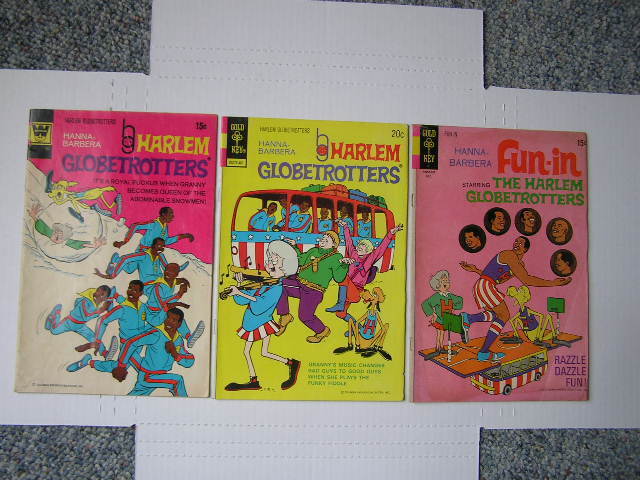 The Harlem Globetrotters are, of course, a world famous exhibition basketball team - and they've appeared in all kinds of different media over the years.

In 1970, Hanna-Barbera and CBS productions produced a Saturday morning cartoon based on the team. It ran for two years and, in 1972, Gold Key Comics launched a comic adaptation of the show, which ran for 12 issues.

Telegraph Sport
@TelegraphSport
She's finally made it. Golden girl Jess immortalised in The Beano as 'Ennis The Menace' http://t.co/A6ydDLIu 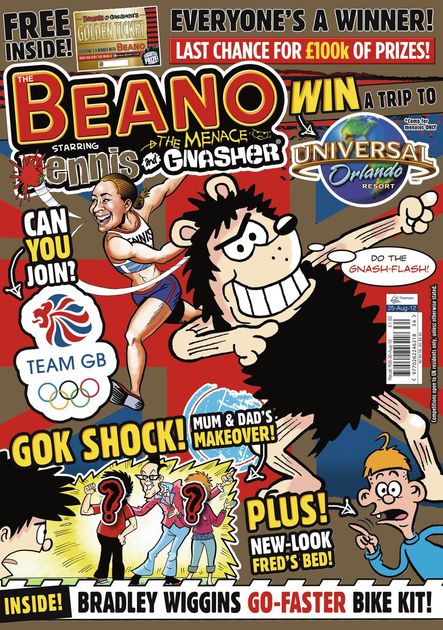 Unfortunately, there haven't been many female athletes immortalised in comic books, but one who has is Jessica Ennis-Hill.

The British Olympic heptathlon gold medalist appeared in a special London 2012 issue of The Beano - an issue on which she was the cover star - calling herself "Ennis the Menace". The issue saw her "out-menacing" Dennis the Menace himself!

Lionel Messi is currently the best footballer on the planet - and quite possibly the greatest player of all time - so it's hardly surprising that he's appeared in a comic book.

In 2017, Fame: Lionel Messi was released - which was essentially a comic book telling the story of Messi's glittering career, from his roots in his native Argentina to the years of success he's had at the Camp Nou with Barcelona in Spain's La Liga.

Other football superstars who had comics in the Fame series included Diego Maradona, David Beckham and this next man... 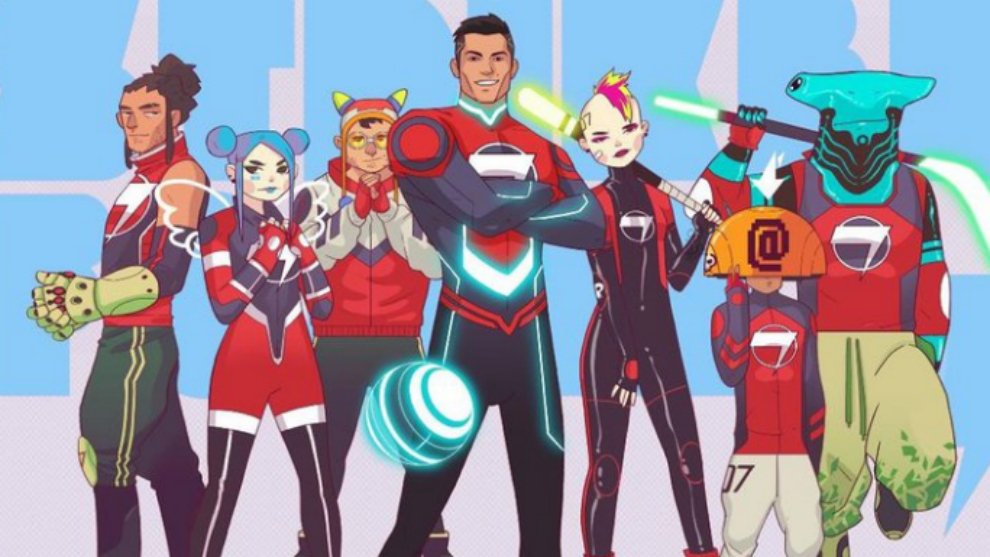 Not to be outdone by his long-time rival, Cristiano Ronaldo has also appeared in comic book form - and not only in the Fame series.

Ronaldo has also appeared in superhero form in the Striker Force 7 comic books, which released earlier this year and are based on an upcoming animated series of the same name. Ronaldo is expected to voice his superhero character, who leads the titular team in the show. 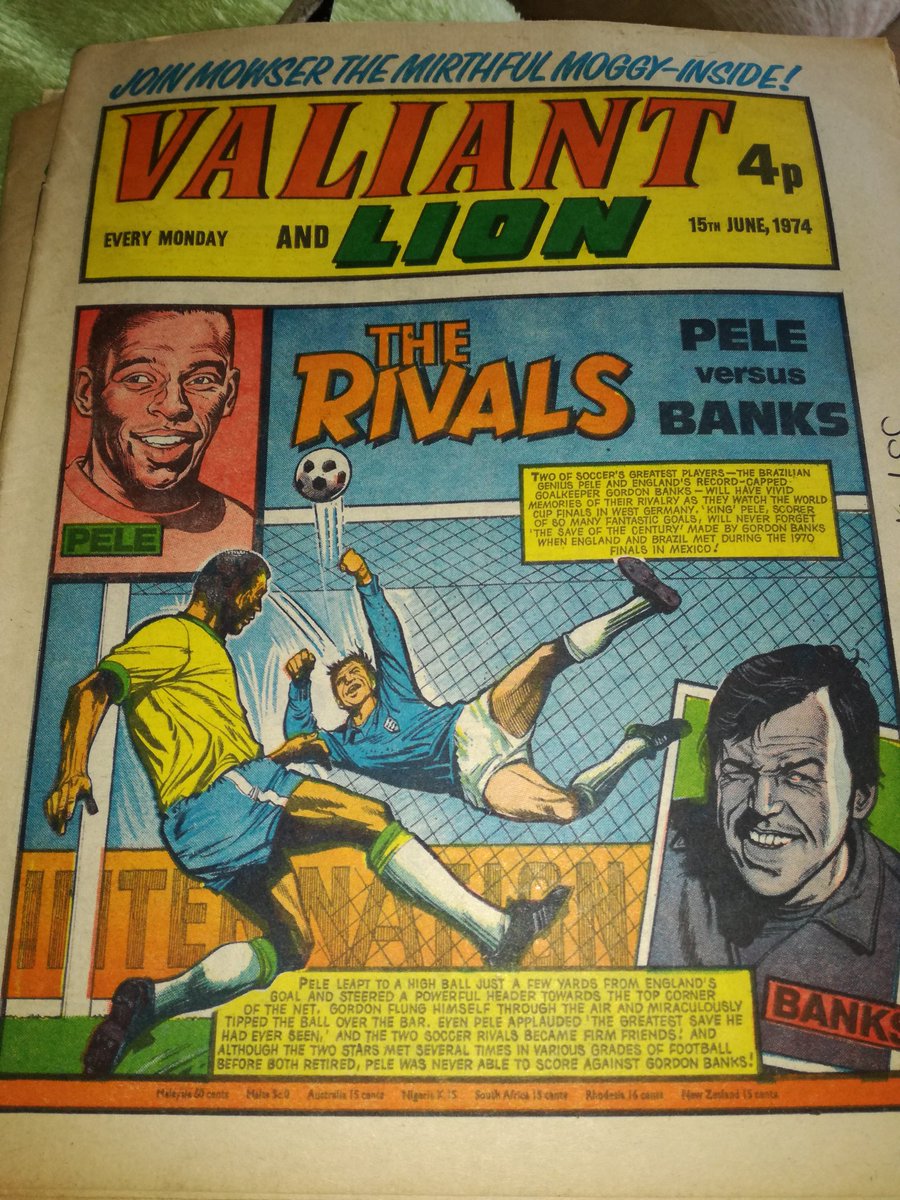 Along with the aforementioned Messi and Ronaldo, Pelé remains one of the footballers considered to be amongst the best to have ever played the game - and he's also appeared in comic books.

Not only was he given his own graphic comic novel - 2017's Pelé: The King of Soccer - he has also made appearances in the likes of Valiant and French publication Tintin l'Hebdoptimiste. 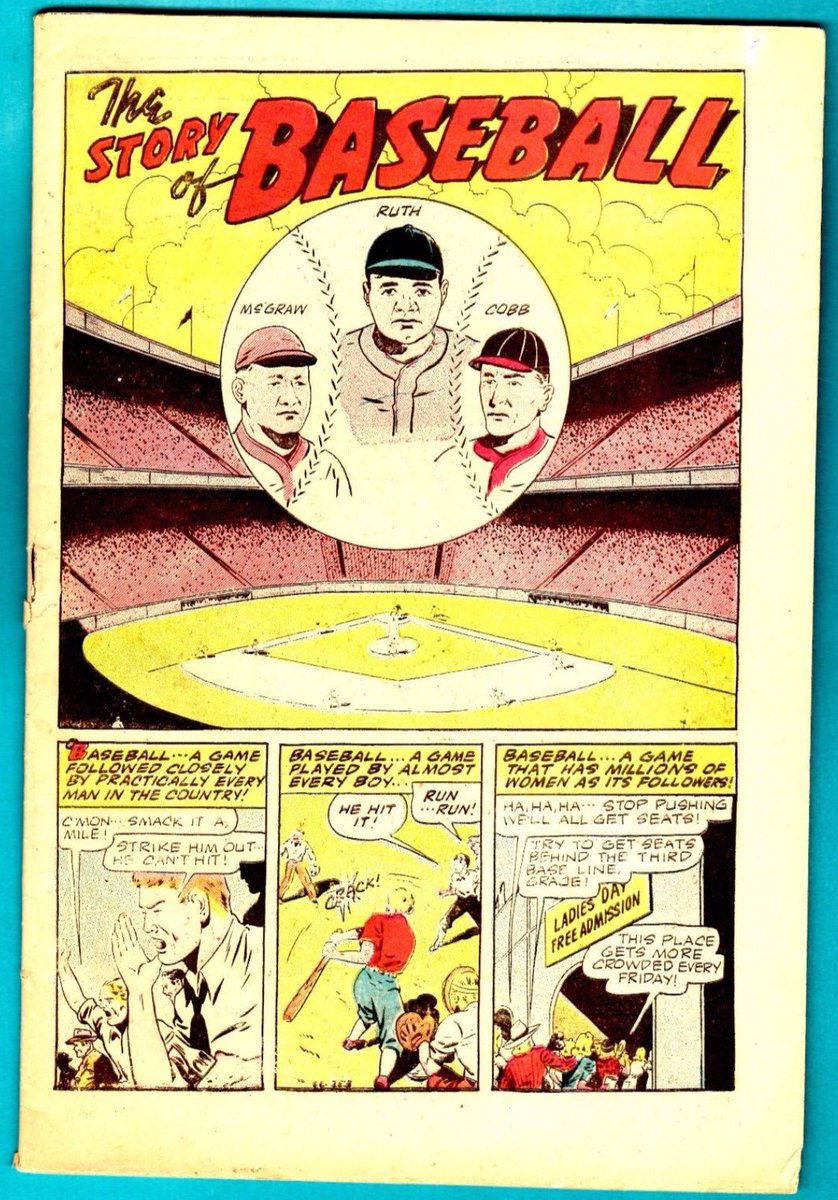 Babe Ruth is the most iconic baseball player of all time - so much so that he actually he had his own series of comic books back in the late 1940s and early 1950s.

Harvey Comics' Babe Ruth Sports Comics ran from 1949 to 1951 and featured sports-based stories, as well as a comic book version of Ruth himself - and the legend has also made brief appearances in other comics, such as MAD Magazine and Action Comics. 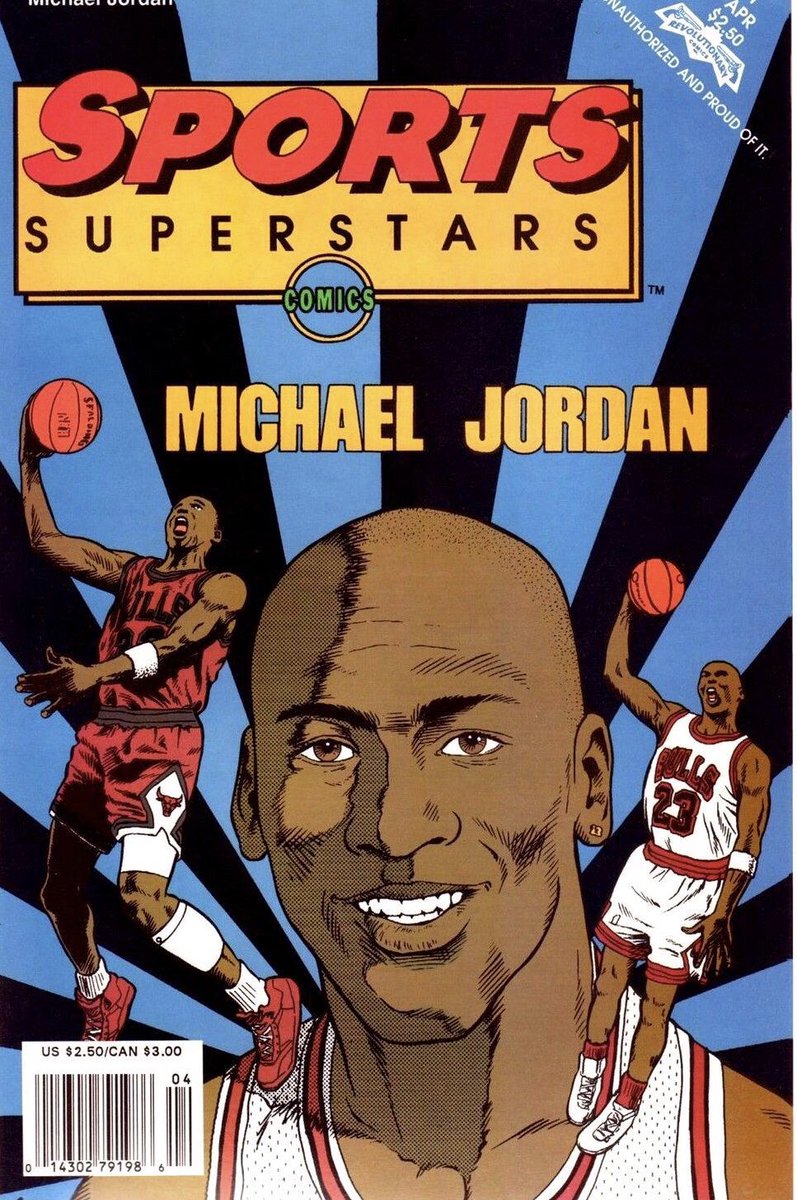 Michael Jordan is to basketball what Babe Ruth is to baseball - the sport's most famous player. It's no surprise, therefore, that he's appeared in comic books.

Jordan was the star of Sports Superstar Comics #1 in 1990 - the first in a series of comics that also went on to feature the likes of Mike Tyson, Joe Montana, Magic Johnson, Wayne Gretzky and many more sporting icons - and he's also appeared in MAD Magazine and Disney Adventures.

Football Back Then ⚽️🏐⚽️
@FootballThen
The day Sir Alf Ramsey met Roy Race of "Roy of the Rovers" fame,back in 1981.@EnglandMemories 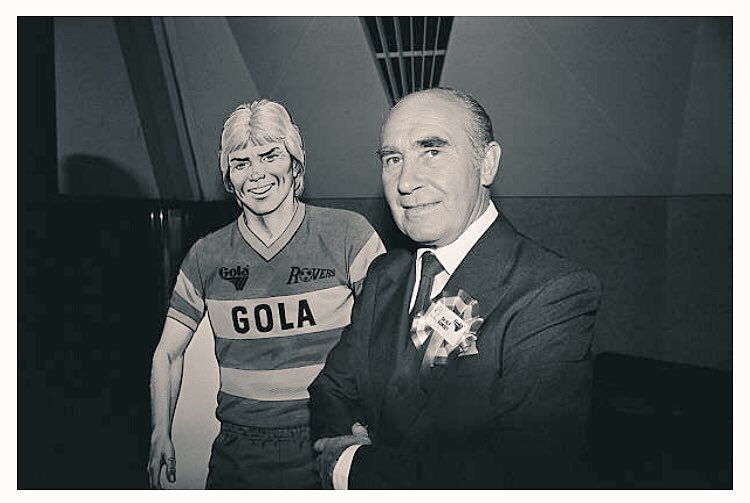 Roy of the Rovers is a British institution. It's been both a comic strip that featured in newspapers and a comic book in its own right - and it's featured a number of real stars from the world of football.

The most notable of them is none other than England's World Cup-winning manager Alf Ramsey - when he stepped in as Melchester Rovers' caretaker manager after Roy Race was shot.

Other footballing stars to appear in the comic include the late Emlyn Hughes, Bob Wilson and Malcolm Macdonald.

More
motorsport
From Senna to Schumacher - The Five F1 Families That Changed...
On 31 March 2001, at Interlagos, Ferrari driver Michael Schumacher recorded his seventh consecutive [ ... ]
motorsport
René Dreyfus: The Motorsport Maverick Who Defied The Nazis On...
“There are only three sports: bullfighting, mountaineering, and motor racing; all the rest are [ ... ]
sports
From Boxing To Baseball, These Sport Films Are Your Lockdown...
The silver-lining of a lockdown is that it gives us a little bit of time to imbibe all [ ... ]
football
''The Quality Of Madness'' - Presenting Marcelo Bielsa, Leeds...
When Leeds United sacked Paul Heckingbottom as head coach after only four months in charge at the end [ ... ]
boxing
From Tapia To Tyson: When Blood And Tears Stain The Boxing Tapestry
“Of all the skills a boxer has to master, none is as mystifying as pain management,” sports [ ... ]
football
Rushie To Everton And Diego Dates Madonna - The Best Footballing...
It was the equivalent of Virgil van Dijk appearing on the front cover of FourFourTwo in a Manchester [ ... ]
motorsport
Thank You, Thierry Sabine - The Dakar Rally Is One Of Sport's...
In 1977, cinemagoers first experienced the now-iconic image of Luke Skywalker staring out over the Tatooine [ ... ]
boxing
''Most Notorious African-American on Earth,'' The Life And Times...
What do Alan Turing, The Doors frontman Jim Morrison and the comedian Lenny Bruce have in common? These [ ... ]
rugby
Alexander Obolensky - Exiled Russian Prince, Fighter Pilot,...
Exiled Russian prince, fighter pilot, and a rugby international who once scored 17 tries in a single [ ... ]
rugby
After 50 England Caps Amy Cokayne Finally Embraces Life As A...
Amy Cokayne is 23 years old and already has 50 caps for England and a Rugby World Cup final behind her. [ ... ]
mma
How Dana White Used 20 Million Instagram Followers To Take On...
When Polish fighter Joanna Jedrzejczyk went to war (and lost) with China’s Weili Zhang in the [ ... ]
sports
Prince, Tyson Fury, Jose Mourinho - Sport's Greatest Ever Press...
It is strange how quickly new trends become traditions. Every afternoon at 5pm, when most people used [ ... ]
sports
Donors, Helpers, Providers - The Sports Stars Stepping Up To...
In times of crisis, there really is something to be gained from looking around at all the good that [ ... ]
football
Speaking The Same Language As Carlo And Jose - The Life Of A...
“What do you do in the bedroom?” “I sleep with your wife.” The life of a football [ ... ]
sports
'Quarantini' Anyone? How To Stay Healthy In Mind And Body At...
Keep those spirits up, dear reader! For many of us, being confined to our homes for the foreseeable [ ... ]
football
Exclusive Leon Osman Interview:The Rooney Explosion And Ancelotti...
Leon Osman couldn’t believe what he was seeing. The Everton midfielder had heard about a young [ ... ]
mma
''A Warrior Poet...Beautiful Man'' UFC Legend Frank Mir Shares...
Former UFC heavyweight champion Frank Mir has told The Sportsman of his admiration for WBC world boxing [ ... ]
boxing
54 Years In The Game, 400 World Title Fights, Bob Arum Is Still...
1966 is a special year in sport for a plethora of reasons.  It was the year the England football [ ... ]
football
'' I Believe In Fairies'' - The Life And Times Of The Extraordinary...
Brian Clough wasn’t just one of the most quotable managers in English football’s long history, [ ... ]
sports
Retired Jersey Numbers: When Sports Stars Become Immortal
Basketball creates universal icons who transcend the sport itself. Over the past three decades or so, [ ... ]
football
From Jules Rimet To The FA Cup, The Sporting Trophies That Went...
When the World Cup trophy was stolen in London on 20 March 1966, it threatened to plunge the most famous [ ... ]
motorsport
On The Ground In Australia As Coronavirus Threw F1 Into Chaos
The beginning of a season is normally a time of high excitement as we wait to see which teams have hit [ ... ]
football
'Wizard Of Dribble' Sir Stanley Matthews Was The First Gentleman...
Sir Stanley Matthews was no ordinary footballer. His was a career which spanned some three decades, [ ... ]
winter-sports
From Wheelchair To World Title, The Amazing Katie Ormerod
Katie Ormerod is at her family home in West Yorkshire, fresh from the news that she has just become [ ... ]
football
''It Will Always Niggle'' - Leon Osman Reveals Hurt At How His...
Leon Osman has told The Sportsman of the hurt that still lingers as a result of finding out by text [ ... ]
football
The Man Behind The FA Cup: How Charles Alcock Made A Modern...
There might never have been a more significant game of football than the one played at The Oval on 16 [ ... ]
boxing
The Mike Tyson Interview: ''Living Takes A Lot Of Courage.''
Mike Tyson’s life has been a well-documented roller coaster ride. A difficult childhood, then [ ... ]
football
60 Years In Football, Sacked 37 Times...There Really Is Only...
When it comes to jobs for life, Barry Fry has it covered. The 75-year-old has been in football for a [ ... ]
football
Exclusive Arthur Numan Interview: Rangers, Romario And Rock...
“You just cannot explain it,” insists Rangers legend Arthur Numan of the intense rivalry [ ... ]
mma
Exclusive: ''I Was Mentally Broke'' - UFC Legend Frank Mir On...
Few heavyweights have ever made more Ultimate Fighting Championship appearances than that man from Las [ ... ]
This website uses cookies
Cookies help us and our partners provide statistics. By browsing this website, you consent to the use of cookies in accordance with our Privacy Policy and Cookies Policy.
Accept & Close