Sports
Features
The Sportsman takes a look at some of the greatest sporting surprises in the last 10 years
Jack Porter
07:01, 25 Dec 2019

The 2010s have come to a close (are we calling in the tweenies? The tenties? The tenners?) with a gallimaufry of high and lows across the sports circumference. As sports fans we’ve been delighted and enthralled, been gazumped and bamboozled even when our own individual horses aren’t running.

Let’s take a look back at six of the most sensational shocks that we’ve been privileged to witness over the past 10 years.

The greatest sports fairytale ever told? Leicester City were 5000/1 to win the Premier League title ahead of the 2015/2016 campaign. The Foxes had been on the verge of relegation the previous season, but some shrewd investment, a misguided sex tape and a departed Nigel Pearson later, they produced the most remarkable triumph in English football history.

In Jamie Vardy, Riyad Mahrez and N’Golo Kante, heroes were born, and there have been few captains or managers as likeable as Wes Morgan and Claudio Ranieri to have lifted the highest accolade in England. Over three years later, just say it again: Leicester City became the champions of England.

The shock to end all shocks, simply historic and destined to be unrivalled for an age. 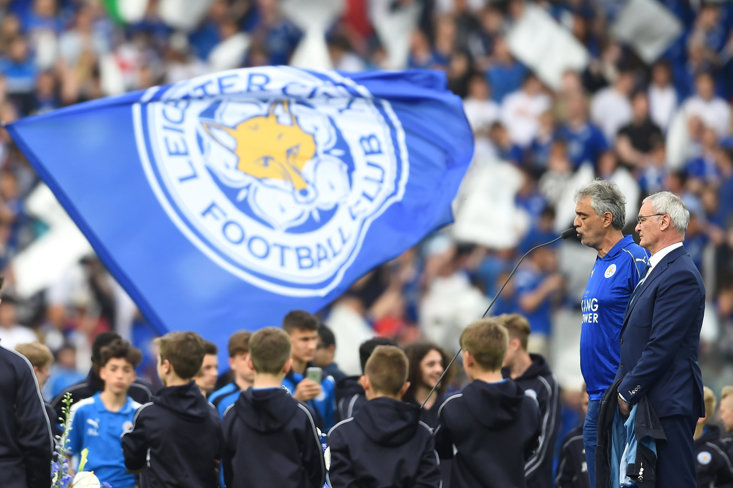 British heavyweight Anthony Joshua possessed a 23-0 record when he lined up his American breakthrough at Madison Square Garden, putting his WBA, IBF, WBO, and IBO titles on the line. AJ’s initial opponent Jarrell ‘Big Baby’ Miller had to withdraw following adverse drug findings, but from that fight’s ashes a Mexican-American phoenix arose.

Andy Ruiz Jr. trashed expectations by producing a stunning flurry to leave the lacklustre Joshua shell-shocked, the Brit having to hand over his belts in the seventh. Joshua may have had his vengeance less than six months later in Saudi Arabia but that stunning initial loss is a definitive moment in boxing’s recent history.

The Sportsman
@TheSportsman
👏🇲🇽 Andy Ruiz Jr. is the first Mexican Heavyweight Champion of the World!
He's defied the odds and stopped Anthony Joshua in the 7th round!
#JoshuaRuiz 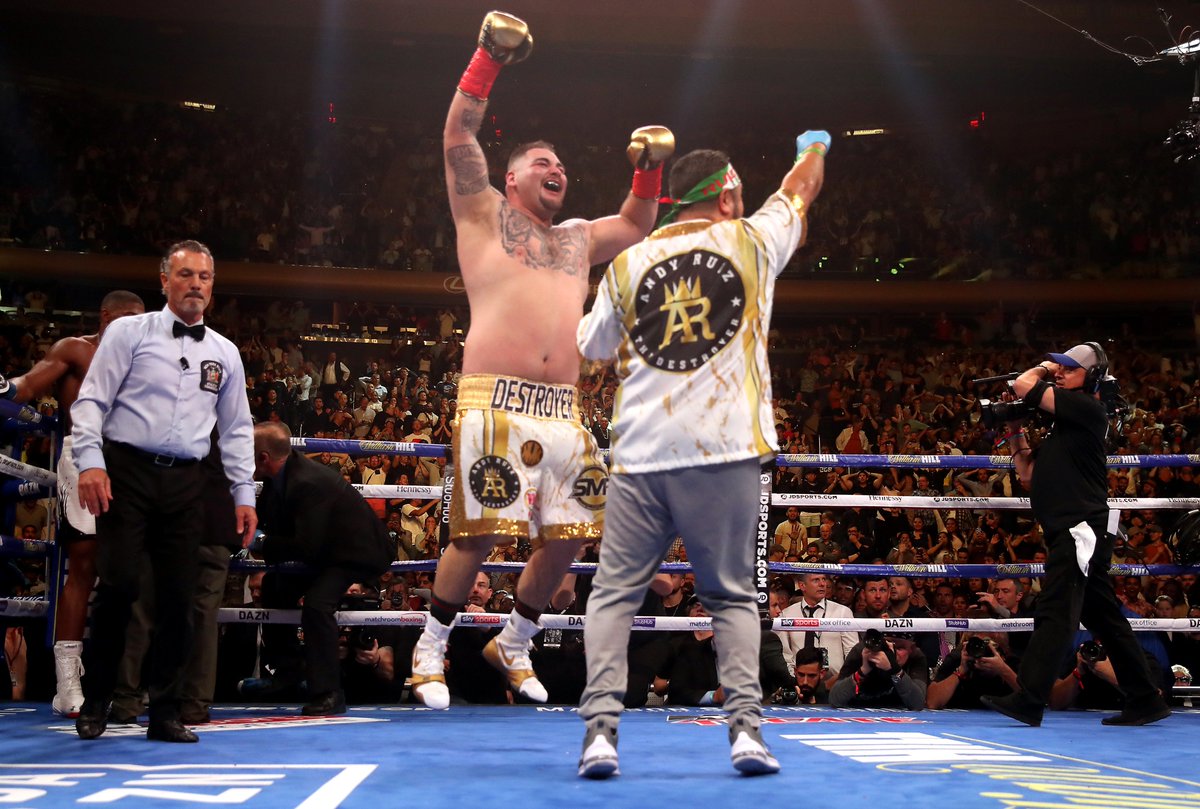 In 2014 Brazil hosted one of the most memorable World Cups in recent memory. The country that helped make football beautiful, the most successful national side in the competition’s history, hosts once again. Expectations were high, with many predicting that they could lift the World Cup trophy for the sixth time in their history, and a first on home soil. An undefeated Canarinha faced Germany in a real clash of the titans in the semi-final at the Estádio Mineirão in Belo Horizonte.

What could have been a match-up turned into a massacre. Die Mannschaft led 5-0 at half-time after netting four times in six minutes in the opening stanza to leave an entire nation in mourning. Jogi Low’s side could easily have caused more damage than the 7-1 final scoreline, with the Germans almost looking embarrassed for their opponents by the end. The watching world was stunned, and Brazil - 64 years on from the 2-1 World Cup loss to Uruguay on home soil which they took a long time to overcome - might never get over their 2014 loss.

Few sporting cities in the USA could be said to have been as beleaguered as Cleveland. The Indians haven’t won the World Series since 1948, the Browns haven’t truly been world-beaters since the days of Jim Brown, and the Cavaliers were pretty much a laughing stock across the Millennium.

Then LeBron James came of age. Though a ring escaped him in his first period with the Cavaliers, King James returned to Ohio in 2014 after four years away (The Decision is now nearly a decade old!) Their match-ups with the Golden State Warriors have lit up the 2010s, and though they were defeated in the 2015 Finals, 2016 saw them make history.

The Cavaliers were the first team in NBA history to come back from a 3-1 series deficit, besting the Warriors in a remarkable turnaround. James was named Finals MVP after scoring 27 points, 11 rebounds and producing 11 assists in Game 7, and it marked the first major sports championship that a Cleveland team had won since 1964. 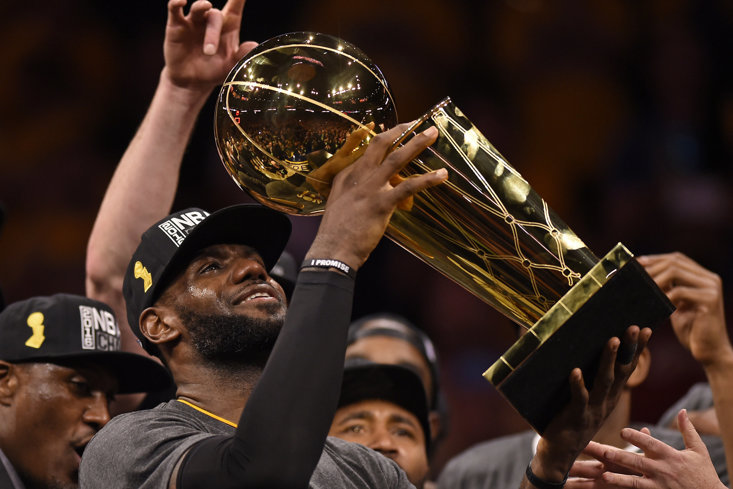 The Chicago Cubs break the Curse of the Billy Goat - 2016

Talking about curses, the Chicago Cubs suffered the longest of the lot. A fan named Billy Sianis wanted to take his mate Murphy to witness the Cubs play in the 1945 World Series. Problem was, Murphy was a goat. Though he had bought an extra ticket for said farmyard animal to enjoy the game at Wrigley Field, the franchise’s owner Philip Wrigley kicked man and goat out. “"The Cubs ain't gonna win no more," slammed Sianis.

And indeed they didn’t, losing that World Series despite being two games from victory. Flash forward to 2016 and you’d be forgiven for thinking the Billy Goat Curse was alive and well. The Cubs, in their first appearance at the World Series since goat-gate, trailed the Cleveland Indians 3-1 after the first four games, 12 months on from having been eliminated in the last four amid a home-run spree by a player called… you guessed it… Murphy.

However, the Cubs came storming back thanks to a newly-adopted Rocky soundtrack and a literal sent-from-the-heavens rain delay when all appeared lost in Game 7, eventually besting the Indians 8-7 in extra innings to claim their first World Series in a record 108 years. 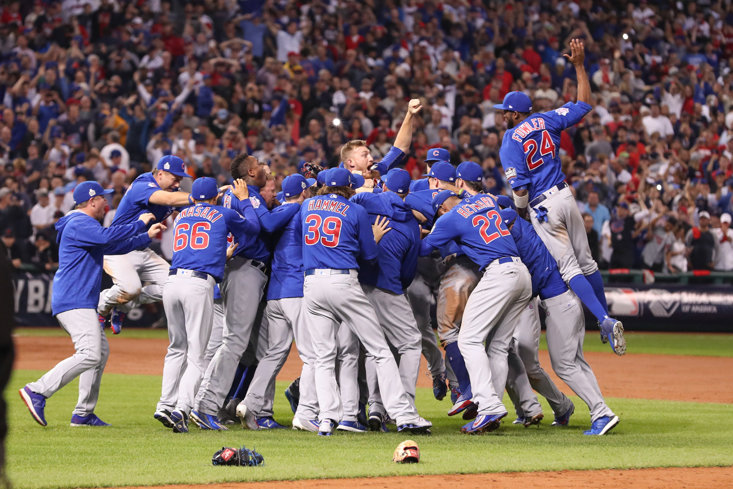 ‘The biggest upset in rugby union history’, and arguably the moment when the sport truly launched itself into the hearts of a nation.

The Rugby World Cup 2015, Brighton, UK. Japan had gone 18 World Cup games without victory, stretching all the way back to 1991, before they stunned the tournament into life by beating South Africa, winners of the Webb Ellis Cup on two previous occasions, in a 34-32 classic.

Japan - coached by Eddie Jones - refused to be intimidated, outsmarting and outplaying the Springboks, and when Karne Hesketh crossed in the final minute, there weren’t just ridiculous scenes on the south-coast but across the globe too. You really couldn’t make it up.

The shock result wouldn’t cause South Africa too much heartburn. They would become three-time champions by defeating England four years later.

All Blacks
@AllBlacks
⏰ WORLD CUP COUNTDOWN | With 15 days to go until #RWC2019 kicks off, we are bringing you 15 great @rugbyworldcup moments. We begin with Japan's stunning victory over South Africa in 2015.
210
893
x
Suggested Searches:
Tyson Fury
Manchester United
Marcus Rashford
Lewis Hamilton
F1
Air Jordan
More
boxing
Outside The Ropes: Natasha Jonas - The Olympian, The Fighter...
The Sportsman delves deeper into the world of professional boxing to uncover the stories away from the [ ... ]
golf
Lazarus With A Five Iron: Tiger Roars Back At The Masters On...
On April 14 2019, the weather was looming ominously in Augusta, Georgia. The only thunder that ultimately [ ... ]
football
Ryan Giggs And The Greatest Goal In FA Cup History
Across his 24 seasons and over 900 appearances as a mainstay of the Manchester United squad, Ryan Giggs [ ... ]
boxing
The Suzie Q To The Hammer, Five Signature Punches That Changed...
The art of punching has moved on leaps and bounds since John L Sullivan won the first heavyweight title [ ... ]
football
Frank Warren On Being Shot, Benn v McClellan And Retirement...
Legendary boxing promoter Frank Warren will take centre stage this weekend as his documentary ‘Make [ ... ]
football
The Big Interview: Jamie Carragher On England Regret, Liverpool...
The Sportsman were lucky enough to sit down for a lengthy chat with former England international, Liverpool [ ... ]
football
On This Day: A 17-Year-Old Alan Shearer Announces Himself To...
On April 8, 1988, a relatively unknown and somewhat scrawny teenager by the name of Alan Shearer, opened [ ... ]
golf
“Hello World, Huh?” When Tiger Woods Announced His Arrival On...
The north suburb of Brown Deer, Wisconsin, at the Brown Deer Park Golf Course.  A stage has been [ ... ]
football
Jamie Carragher On England’s Euro 2020 Hopes, Southgate And...
“Listen, all this nonsense that people talk about you have got to play the best teams to win it, [ ... ]
boxing
When Buster Douglas Shocked The Boxing World By Beating Iron...
What do you do when you’re given a 42/1 ‘not-a-chance-in-hell’ price for victory?  [ ... ]
boxing
The Hardest Puncher Ever Born: The Sportsman Interviews Earnie...
It was in 1977 at Madison Square Garden that Shavers pushed Muhammad Ali all the way to fifteen [ ... ]
football
EXCLUSIVE: FC Porto's Toni Martinez Talks Champions League,...
Toni Martinez let out a roar of elation. On his knees and with clenched fists, the emotion poured out [ ... ]
football
Rushie To Everton And Diego Dates Madonna - The Best Footballing...
It was the equivalent of Virgil van Dijk appearing on the front cover of FourFourTwo in a [ ... ]
boxing
Outside The Ropes: Steve Wood - The Promoter, The Manager And...
The Sportsman delves deeper into the world of professional boxing to uncover the stories away from the [ ... ]
motorsport
From Senna to Schumacher - The Five F1 Families That Changed...
On 31 March 2001, at Interlagos, Ferrari driver Michael Schumacher recorded his seventh consecutive [ ... ]
football
Ollie Watkins' Former Coach On His Incredible Rise From Non-League...
Ollie Watkins is used to making an immediate impact. Joining sixth-tier side Weston-super-Mare on loan [ ... ]
football
An Ode To Goodison Park As Everton Prepare To Bid Farewell To...
It is finally happening, Everton are leaving the Grand Old lady, Goodison Park, one of the most recognisable [ ... ]
rugby-league
Your Club-By-Club Guide To The 2021 Betfred Super League Season...
Happy New Year! Tonight marks the start of 2021 for Betfred Super League fans, with the first two matches [ ... ]
rugby-league
Your Club-By-Club Guide To The 2021 Betfred Super League Season...
The Betfred Super League is back! Friday brings the first two games of the new season as rugby league’s [ ... ]
football
How A Big Rangers Fan Helped Plot Brora's Huge Cup Giant-Killing...
“I didn’t think it could get any better after last week but it’s definitely [ ... ]
horse-racing
Horse Racing Has Lost A Legend In Sheikh Hamdan Al Maktoum
Sheikh Hamdan bin Rashid Al Maktoum, one of the most influential owner/breeders of flat racing over [ ... ]
rugby-league
How York's Super League Ambition Led O'Hagan To Swap Australia...
Brendan O’Hagan could have taken the easy choice. As Australia was coming out of the other side [ ... ]
athletics
Being Unbeatable To Feeling Broken, Now Jodie Williams Is Ready...
“Do not be afraid to speak up. That is definitely something that I really struggled with, admitting [ ... ]
boxing
Outside The Ropes: Curtis Woodhouse - The Premier League, The...
The Sportsman’s new feature series ‘Outside the Ropes’ delves deeper into the world [ ... ]
football
Balotelli, Boateng and Berlusconi Aiming To Make Monza History...
Monza is a massive part of Formula One history, having hosted Grand Prix races on the iconic [ ... ]
rugby-league
New Stadium And New Ambitions For York City Knights In 2021
It’s hard to believe when stood in the LNER Community Stadium, the new home of the York City Knights, [ ... ]
football
How Lewes FC Are Leading The Football World As The First Among...
“I read a staggering statistic the other day and it was that 0.004 percent of sponsorship [ ... ]
football
Barnsley's CEO On Valerien Ismael's Golden Touch As Reds Close...
“I would be lying if I said I thought this would be as successful as it has been. Did I believe [ ... ]
football
30 Years On From His Man United Debut, Ryan Giggs' Legacy Will...
Ryan Giggs was always destined to be a star.  “Myself and Bryan Robson went to see the youth [ ... ]
darts
From Phil Taylor To Tiger Woods, Five Athletes Who Dominated...
We all adore sport when it is at its most competitive. Close title races, match points and play-offs [ ... ]