Two years after Justin Gatlin certified himself as the villain of athletics by beating Usain Bolt to the World Championship title amidst the deafening silence of the London Stadium, he will look to defend his title. The 37-year-old has already confirmed that the 2020 season will be his last on the track, with a gold medal at the Tokyo Olympics viewed as the perfect way to round off his career.

But he will have serious competition, both next year in Japan and this week in Doha, for his crown. We’ve taken a look at the sprinters to watch at the World Championships this week.

The fastest man in the world this year and the favourite to take home the gold medal in the 100m, Christian Coleman looks like he is the man to beat in Qatar. Having recorded a time of 9.81 seconds in California in June, the 23-year-old is looking to do the 100m and 200m double this year.

Having set the world record for the 60m last year, his powerful start is his strength and although he is the clear favourite for the 100m, he will likely need to break his personal best of 19.85 to win the 200m.

Perhaps the most disappointing news for sprint fans is the fact that Coleman’s great rival, Noah Lyles, has chosen to focus on the 200m and not participate in the 100m. The 22-year-old is expected to double up at the Olympics next years but for now, he has Bolt’s world record in his sights having run 19.50 this year.

Like Bolt, he is a born entertainer and the athlete to watch at these games. A win for Coleman in the 100m and Lyles in the 200m would set up a mouthwatering match-up in Tokyo.

The European champion represents Britain’s best hope of a medal in the men’s sprint events. Born in Anguilla and now living in Jamaica he has been getting quicker and quicker and at the age of 24 is now approaching his peak. The Brit is coached by Glen MIlls, the same man who oversaw Usain Bolt’s career and fellow Jamaican Yohan Blake.

The fastest man in history is one of Hughes’ fiercest critics on the track as he told BBC Sport:  “Even now he [Bolt] is retired, he'll sometimes show up with a stopwatch and be on my case saying, 'That was too slow,' or 'Get out harder'. He watches my Instagram stories as well so I know he's watching and supporting me.” Also a trained pilot, Hughes will hope to fly on the track and secure himself a medal in Doha

It has been about near misses in recent years for Gemili who finished fourth in the 100m two years ago in London, finishing just 0.05 seconds behind Bolt as he missed out on a medal. In Rio 2016, he came even closer to a medal, again finishing fourth by three thousands of a second in the 200m.

Improvement is again needed here to contest for a medal but Gemili has shown he can produce on the world stage and it is exciting that Britain could have two names in the 100m final.

Yohan Blake
@YohanBlake
It was a good race last night in Zurich. I can't complain. It is all you, God. None of me and all of you. 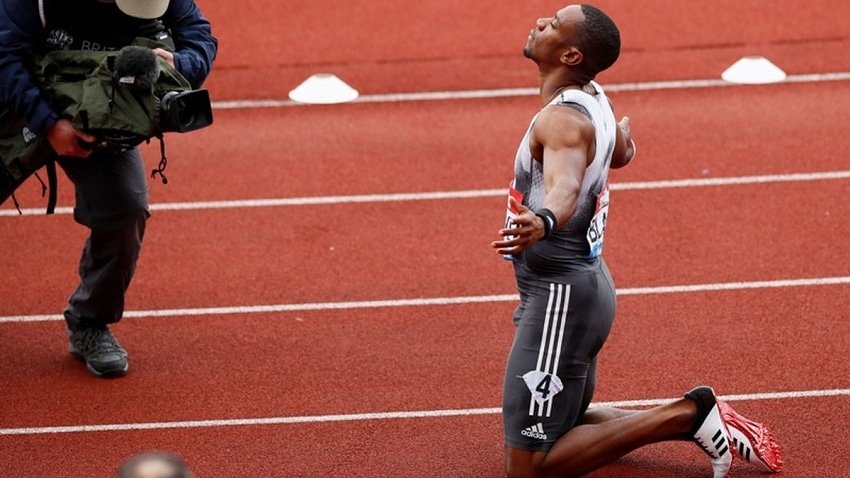 The 29-year-old Jamaican who looked like the next best thing at London 2012 has not quite filled his potential since 2014. He was the man who pushed his countryman Bolt all the way at those Olympics as he won two silver medals and a gold in the relay but since then he struggled with injuries.

With his pedigree and experience, he could contend for a medal if he matches betters his season’s best time, but is unlikely to come close to gold.

The Canadian’s comeback after an injury-hit couple of years could be complete in Doha. Having won a bronze and a silver at the Rio Olympics, he was flying heading into the 2017 Championships before a late hamstring injury forced him to pull out, but the 24-year-old has the ability to go well here.

He may fair slightly better in the 200m than the 100m but he has gone under ten seconds this year in the shorter event although his impressive stamina is likely to put him in medal contention for the 200m. De Grasse at his best is brilliant to watch and will hope to be able to recreate his form from three years ago here.

Anson Henry
@ansonhenry
Andre De Grasse explains the concept behind his new #SonicTheHedgehog spikes in this #PARLAY Short.
Full video -
@De6rasse @PUMA @PUMARunning @CBCOlympics @sonic_hedgehog #SonicMovie
41
167
More
motorsport
Thank You, Thierry Sabine - The Dakar Rally Is One Of Sport's...
In 1977, cinemagoers first experienced the now-iconic image of Luke Skywalker staring out over the Tatooine [ ... ]
boxing
''Most Notorious African-American on Earth,'' The Life And Times...
What do Alan Turing, The Doors frontman Jim Morrison and the comedian Lenny Bruce have in common? These [ ... ]
rugby
Alexander Obolensky - Exiled Russian Prince, Fighter Pilot,...
Exiled Russian prince, fighter pilot, and a rugby international who once scored 17 tries in a single [ ... ]
rugby
After 50 England Caps Amy Cokayne Finally Embraces Life As A...
Amy Cokayne is 23 years old and already has 50 caps for England and a Rugby World Cup final behind her. [ ... ]
mma
How Dana White Used 20 Million Instagram Followers To Take On...
When Polish fighter Joanna Jedrzejczyk went to war (and lost) with China’s Weili Zhang in the [ ... ]
sports
Prince, Tyson Fury, Jose Mourinho - Sport's Greatest Ever Press...
It is strange how quickly new trends become traditions. Every afternoon at 5pm, when most people used [ ... ]
sports
Donors, Helpers, Providers - The Sports Stars Stepping Up To...
In times of crisis, there really is something to be gained from looking around at all the good that [ ... ]
football
Speaking The Same Language As Carlo And Jose - The Life Of A...
“What do you do in the bedroom?” “I sleep with your wife.” The life of a football [ ... ]
sports
'Quarantini' Anyone? How To Stay Healthy In Mind And Body At...
Keep those spirits up, dear reader! For many of us, being confined to our homes for the foreseeable [ ... ]
football
Exclusive Leon Osman Interview:The Rooney Explosion And Ancelotti...
Leon Osman couldn’t believe what he was seeing. The Everton midfielder had heard about a young [ ... ]
mma
''A Warrior Poet...Beautiful Man'' UFC Legend Frank Mir Shares...
Former UFC heavyweight champion Frank Mir has told The Sportsman of his admiration for WBC world boxing [ ... ]
boxing
54 Years In The Game, 400 World Title Fights, Bob Arum Is Still...
1966 is a special year in sport for a plethora of reasons.  It was the year the England football [ ... ]
football
'' I Believe In Fairies'' - The Life And Times Of The Extraordinary...
Brian Clough wasn’t just one of the most quotable managers in English football’s long history, [ ... ]
sports
Retired Jersey Numbers: When Sports Stars Become Immortal
Basketball creates universal icons who transcend the sport itself. Over the past three decades or so, [ ... ]
football
From Jules Rimet To The FA Cup, The Sporting Trophies That Went...
When the World Cup trophy was stolen in London on 20 March 1966, it threatened to plunge the most famous [ ... ]
motorsport
On The Ground In Australia As Coronavirus Threw F1 Into Chaos
The beginning of a season is normally a time of high excitement as we wait to see which teams have hit [ ... ]
football
'Wizard Of Dribble' Sir Stanley Matthews Was The First Gentleman...
Sir Stanley Matthews was no ordinary footballer. His was a career which spanned some three decades, [ ... ]
winter-sports
From Wheelchair To World Title, The Amazing Katie Ormerod
Katie Ormerod is at her family home in West Yorkshire, fresh from the news that she has just become [ ... ]
football
''It Will Always Niggle'' - Leon Osman Reveals Hurt At How His...
Leon Osman has told The Sportsman of the hurt that still lingers as a result of finding out by text [ ... ]
football
The Man Behind The FA Cup: How Charles Alcock Made A Modern...
There might never have been a more significant game of football than the one played at The Oval on 16 [ ... ]
boxing
The Mike Tyson Interview: ''Living Takes A Lot Of Courage.''
Mike Tyson’s life has been a well-documented roller coaster ride. A difficult childhood, then [ ... ]
football
60 Years In Football, Sacked 37 Times...There Really Is Only...
When it comes to jobs for life, Barry Fry has it covered. The 75-year-old has been in football for a [ ... ]
football
Exclusive Arthur Numan Interview: Rangers, Romario And Rock...
“You just cannot explain it,” insists Rangers legend Arthur Numan of the intense rivalry [ ... ]
mma
Exclusive: ''I Was Mentally Broke'' - UFC Legend Frank Mir On...
Few heavyweights have ever made more Ultimate Fighting Championship appearances than that man from Las [ ... ]
sports
Real Life Forrest Gump Is On A Mission To Discover What It Means...
Rob Pope is a 42-year-old vet from Liverpool who describes himself as “your average talkative [ ... ]
football
Pele On Tour - The Times The Brazilian Legend Brought His Brilliance...
One of the most recognisable names in football, and a player who pretty much did it all at the highest [ ... ]
football
Beauty, Drama, Passion And Tragedy - Why Italia '90 Was The...
You only have to listen to the classic opening title sequence used by the BBC for their Italia '90 [ ... ]
motorsport
All Action Superhero Barry Sheene - He Loved The People And...
During my time working in the MotoGP and F1 paddocks I’ve been lucky enough to meet some great [ ... ]
motorsport
''DAS Ist Good'' - Can Anyone Really Better The Brilliant Benz...
The fireworks are exploding overhead, the music is pumping from the PA system and Lewis Hamilton, along [ ... ]
boxing
Remembering The Fight That Sparked Sports Greatest Rivalry:...
“I hated Ali. God might not like me talking that way, but it's in my heart.” Amidst [ ... ]
This website uses cookies
Cookies help us and our partners provide statistics. By browsing this website, you consent to the use of cookies in accordance with our Privacy Policy and Cookies Policy.
Accept & Close