Athletics
Features
Rudolph may be the greatest Olympian of the 20th century
Jack Porter
16:00, 13 Aug 2020

She was told she would never walk again. Instead she became the fastest woman on the planet.

Wilma Rudolph is the athlete you ought to know.

It’s 1960. Rome, Open City. Prospective Olympians have travelled from all four corners for the sporting centerpiece, the main stage to prove their worth, to tread the line between fame, infamy, and obscurity.

September 2; six contestants line up on the grid, heads down, legs tense, bodies primed. There’s Mariya Itkina of the Soviet Union, Catherine Capdevielle of France, Italy’s Giuseppina Leone, and the British duo of Dorothy Hyman and Jenny Smart. But there is one black face amidst the white. This is Wilma Rudolph, and she may be the greatest Olympian of the twentieth century. 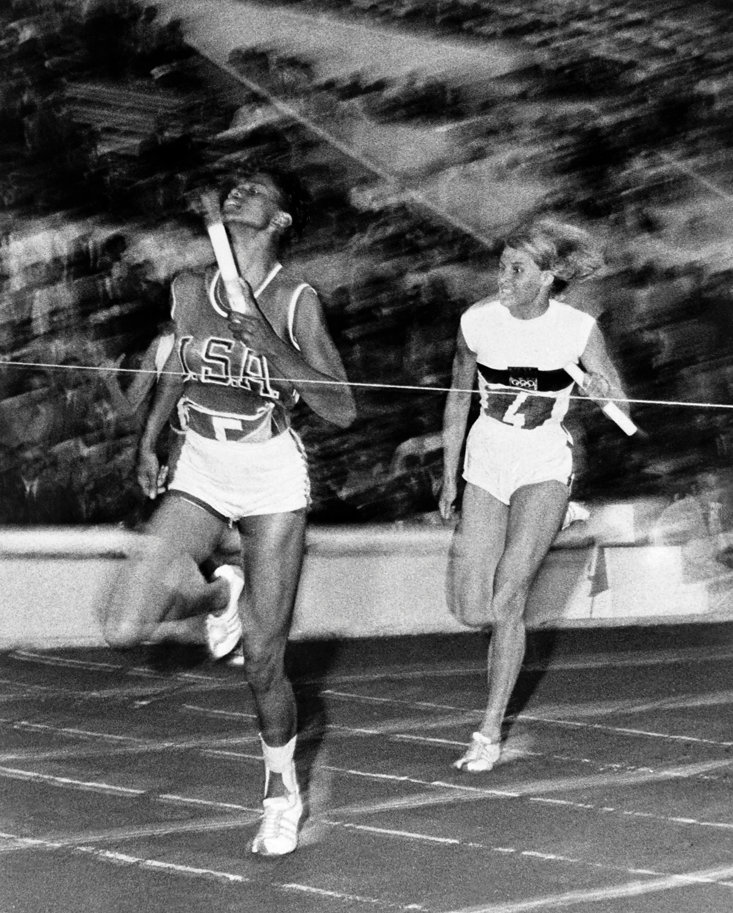 Her start for this 100 metres is typically slow, but determination, grit and guile are etched on her face.

“I always had the worst start in the history of any sprinter,” Rudolph conceded, “Because of my size. I was the tallest sprinter that ever came from the United States. My first 30 to 45 yards I was never in the race so I was always happy they never had 30 to 40yard races!”

She pulls forward, stride after stride. Leone is third. Hyman has bested Leone by .05 of a second, for second.

But Rudolph has already finished, recording a time of 11.18, almost 0.3 seconds faster than any opponents who crowded out the track.

There’s no real visible joy as she crosses the finish line. She’s been determined, and that determination will take a while to scrub off. Furthermore, she knows, though gold has been in the bag for the past two days, she’s only a third of the way there. 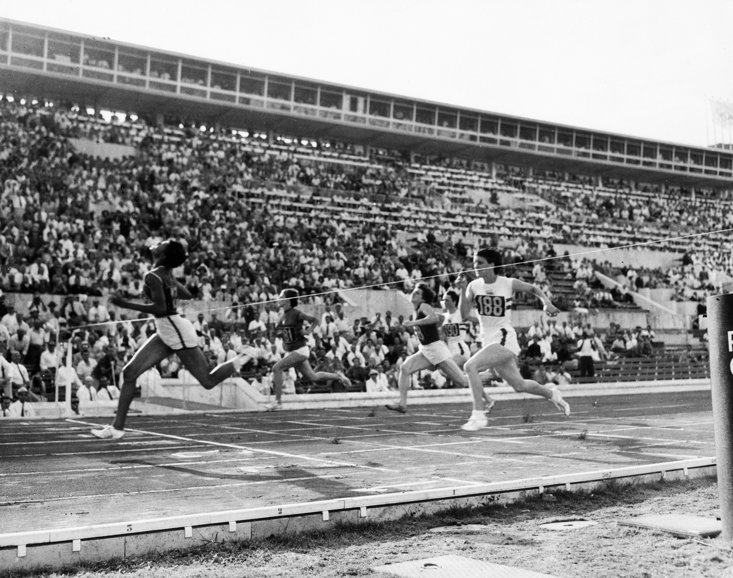 Two months prior, in July ‘60, Rudolph ran the 200m in an eye-watering, leg-breaking 22.9 seconds to win the AAU Championships and smash the world record. Therefore, hitting the event in the Italian capital, she was the heavy favourite for the crown. She duly obliged. In round one she broke the Olympic record with 23.2 seconds, with her 200m final gold medal run in 24.0 against unforgiving heavy wind.

Time to celebrate? No. Rudolph was to be the pivot in the 4 x 100m relay just two days later, alongside compatriots and Afro-Americans Martha Hudson, Lucinda Williams, and Barbara Jones. They set a new world record in their heat. In the final however, the fire needed to be there. There were familiar threats from the East - Communism-imbued nations Poland, a United Germany team, and the Soviet Union itself prove to be the greatest challengers to the USA’s quest for relay gold.

Rudolph is passed the baton by Jones. The Polish Halina Richter and German Jutta Heine are mere inches away, literally neck-and-neck-and-neck. But this is Rudolph’s territory. She leaves her rivals in her wake and crosses the line to record 44.72 for the Americans, a time that would have set a new WR had they themselves already not procured 44.50 in the previous round.

Now it is celebration. Wilma Rudolph has just become the first American female to win three gold medals at a single Olympics. She is certifiably the fastest woman on the planet. 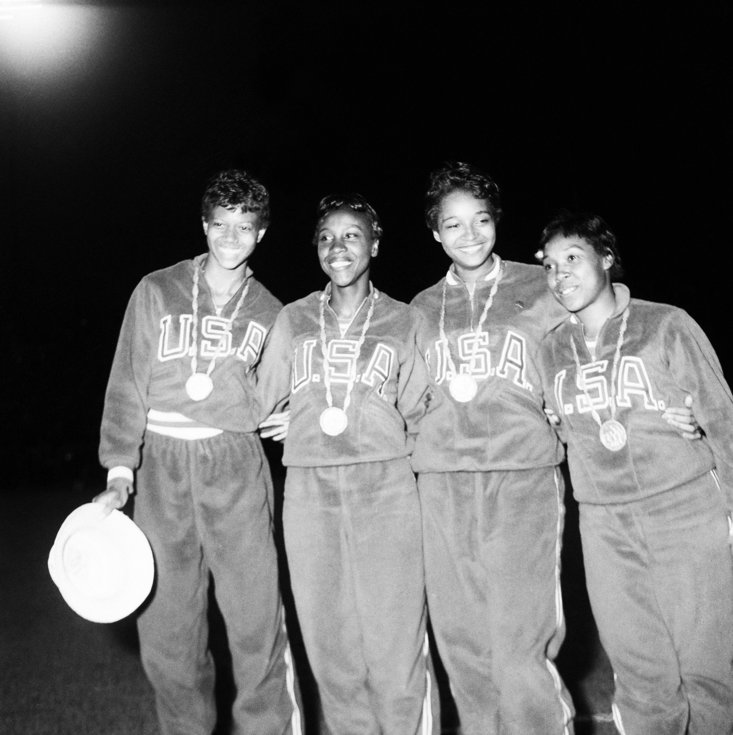 Born on June 23, 1940 in Saint Bethlehem, Tennessee, as one of 22 children, Rudolph was beleaguered by illness from a young age. Riddled with polio and scarlet fever that left her unable to walk, she just started to hop on one leg aged six, and aged eight could move around only via a leg brace.

“I grew up a lot different from most kids,” she later recalled, “I grew up with a series of childhood illnesses. I think the most difficult moments growing up was being teased by my peers. Not being accepted to play and doing all the things one wants to do growing up.”

Aged 12, thanks to the nurture and devotion of her many, many brothers and sisters, she moved onto the basketball court and her new-found love and evident ability led on to her being nominated as All-American in basketball during high school, turning to track and field to compete on the collegiate level.

When she was barely 17, Wilma Rudolph found herself pregnant, so, when she rose to Olympic omnipotence at the start of the sixties, she was the mother of a two-year old girl.

Despite all of her disadvantages life had thrown her way, Rudolph became the Olympic paradigm in 1960; the highest achievement in the greatest, most celebrated setting. As one of the most highly visible African American women across the country in the time at the heart of the Civil Rights Movement, in her homeland she became known as the “leading lady” and “queen”. Upon her return from Italy with the trip-gold, her home city in Clarksville, Tennessee, held a “Welcome Wilma Day” on Oct 4, where thousands lined the streets, although in the still-segregationist South, Rudolph refused to attend if it was not integrated. 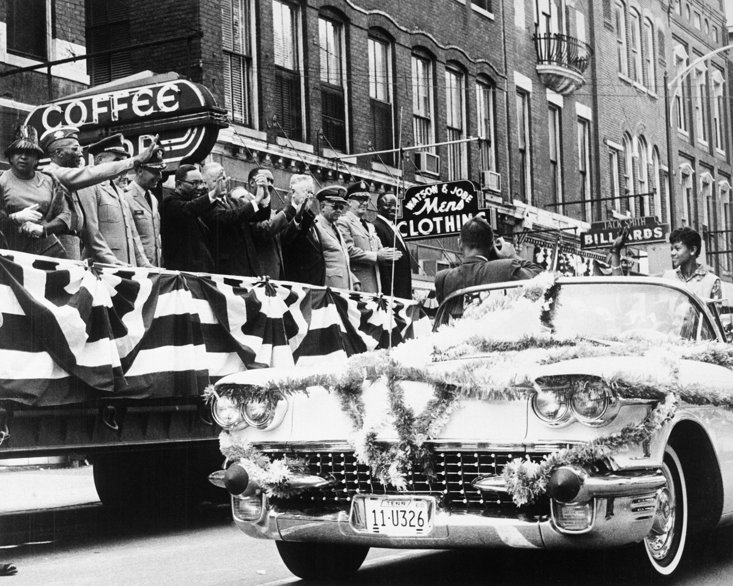 Two years after her historic feat in Italy, she retired, maintaining her prestige as the paragon of the track and field. “I was running well but the heart wasn’t there anymore,” she stated in an television interview, “What do you do when you win all of it?” She bowed out in 1962 as the world record holder in the 100m, 200m and 4x100m relay, choosing not to defend her Olympic titles in Japan in 1964 and following the path of a predecessor, subsequently stating that “If I won two gold medals, there would be something lacking. I’ll stick with the glory I’ve already won like Jesse Owens did in 1936.”

Rudolph burned brightly and then died tragically, relatively young. On November 12, 1994. Rudolph passed away from a brain tumour.

Before she died, Wilma Rudolph recalled her journey to Olympic success.