It’s been 35 joy-filled years since the world’s most famous 8-bit plumber stomped his way onto the Nintendo Entertainment System and since then it’s fair to say that Mario has easily been one of the most successful franchises ever (we’ll even let the dreadful 1993 film adaptation with Bob Hoskins slide).

Since the series’ launch in 1985, Super Mario has been one of video game’s most unstoppable forces, selling 330 million copies worldwide, subsequently making it the third highest selling video game series in history, behind only Pokémon and Tetris. He’s one of the few characters that have truly transcended the world of gaming - even your nan knows who that chubby little fella in the red and blue overalls is! So it makes sense that he gets some serious love in the sneaker world, too.

To coincide with the release of Super Mario 3D All-Stars on Switch, a collection of three of Mario’s greatest adventures, Nintendo have teamed up with Puma to pay homage to the games on Puma’s Future Rider, Clyde and RS-Fast shoe models, filling them to the brim with an array of Mushroom Kingdom-inspired treats. 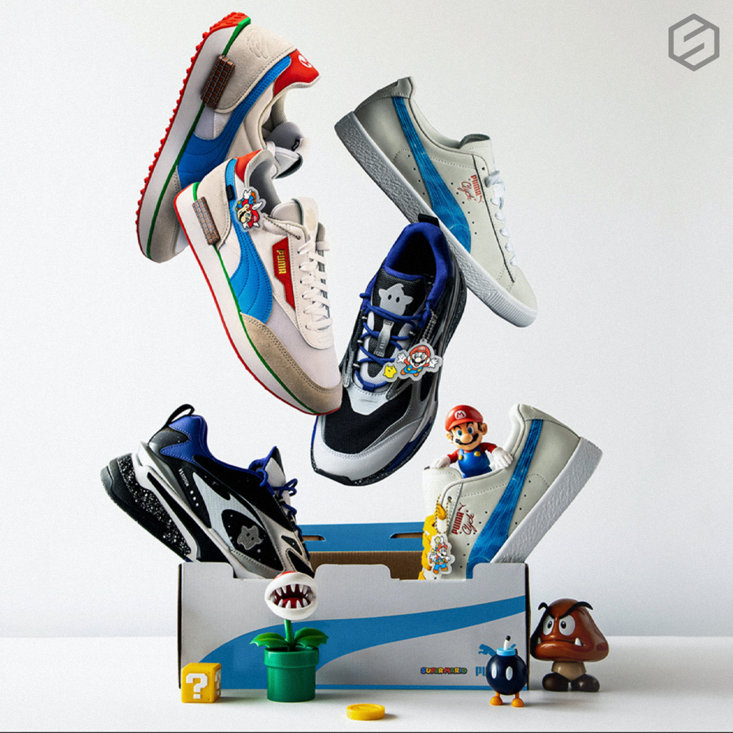 First up, the Future Rider is a tribute to Mario 64 (1996), not only one of the greatest Mario games of all-time but one of the most important video games of all-time, period. It’s a nod to the first level Bob-omb Battlefield - guaranteed to send the nostalgia flying back. Mario Sunshine (2002), is perhaps the most divisive Mario game ever, but there’s nothing divisive about the Clydes that are inspired by them. Focusing heavily on the tropical nature and the game’s use of water mechanics, these beauts come with a water-printed Formstripe on the lateral that would sit right at home in the GameCube classic. Finally, Super Mario Galaxy (2007) gets given the love on the RS-Fast, with a black, white, purple and metallic silver colourway with an astral print that is as out of this world as the game it’s based on.

If these aren’t to your fancy, check out this Super Mario-themed collaboration between Nintendo, Puma and rapper J.Cole earlier this year - the RS-Dreamer “Super Mario 64”

The Nintendo x PUMA Super Mario 3D All-Stars collection will be released via the PUMA webstore on November 27.