Athletics
Features
Alex Yee is by no means the only British triathlete ready to cause a stir in Tokyo
Rob Walker
12:56, 10 Jun 2021

After a few weeks off in May following the epic end to the snooker season, it was with great delight that I headed north to one of my favourite counties, Yorkshire, last Friday. The destination was Roundhay Park in Leeds for the latest instalment of the World Triathlon Series.

Specifically, I was there to help out on an innovative afternoon of coverage of the Paratriathlon series on the Saturday, and as always there was a real buzz around the city.

Bringing such a prestigious set of races to their home county is a lasting legacy of the Brownlee brothers’ epic achievements over the last decade and a half. They were both competing on the Sunday, with Alistair needing a big performance to give himself a chance of a successful title defence in Tokyo.

And to be honest, after fielding so many questions from so many people about whether the Games would go ahead (in both social and professional contexts), it was a relief and a joy to be watching world-class racing eye balls out up close and personal again!

If you’re new or uninitiated to the world of triathlon, it is a brilliant sport which looks great on TV, especially in the glorious sunshine that enveloped us last weekend.

There is also no short cut to success in this three-discipline event, and it’s moved way beyond the lazy outdated stereotype that it is the dwelling place of frustrated cyclists and runners who couldn’t quite make it in their first chosen sport.

I can remember the sport making a long-awaited debut in Sydney in 2000 and a finer backdrop you could hardly have imagined, with transition perfectly situated in the shadows of the Sydney Opera House.

From a British point of view there was much expectation on Simon Lessing. The multiple world champion was one of the pre-race favourites, but in the end it was another Simon (Whitfield, from Canada) who sealed the inaugural men’s title a day after Switzerland’s Brigitte McMahon had out-sprinted Australian Michelle Jones to take the women’s crown by two seconds.  Lessing ended up ninth with Tim Don, a future world champion, having a great race just a place behind him in 10th. 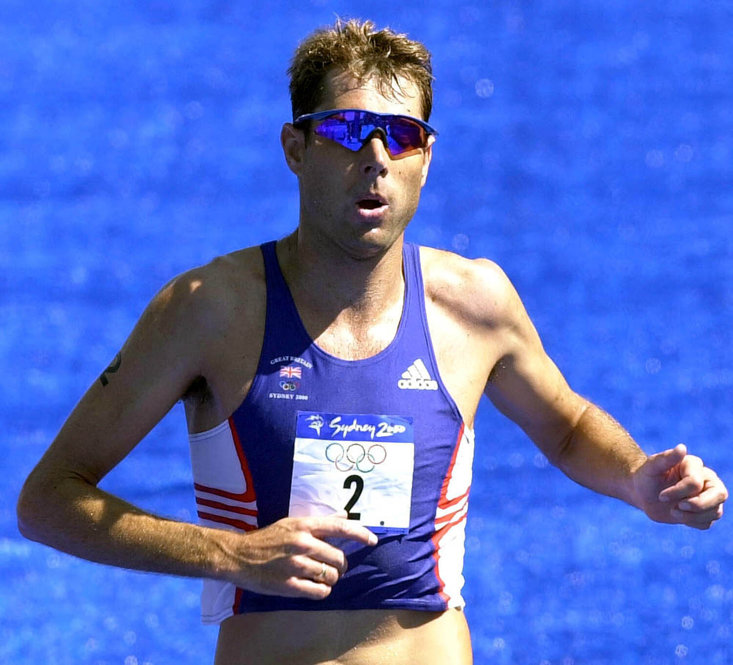 More than 200,000 people had lined the iconic route and triathlon’s future in the Olympic programme was assured. Not bad for a sport which only had its first official world championship in 1989 in Avignon, France!

There have been some epic moments and races since. One of the most memorable incidents in the Olympic Games surely has to be the sight of British triathlete Marc Jenkins, who would go on to marry two-time world champion and Olympian Helen Jenkins, carrying his bike the last 2km into transition in Athens 2004 after a collision on the course meant running with it on his shoulder was the only way to keep going. He went on to finish last and rightly took a lot of credit for adhering to the Olympic ideals of taking part being important.

In 2008 a largely unknown German, Jan Frodeno, storm to the Olympic title a day after his 27th birthday. He had taken silver at the previous year’s European champs and relegated the reigning world champion Javier Gomez to fourth. Alistair Brownlee’s debut ended in a very creditable 12th place finish after gamely sticking with the leaders as long as he could on the run.

That Brownlee boldness in Beijing was an indication of what was to come in 2012 and 2016 as he and younger brother Jonny stormed to gold and bronze in London (with Gomez sandwiched between them) and gold and silver in Rio. No one had ever previously successfully defended the Triathlon title.

Their achievements, approachability, Yorkshire grit and sibling rivalry combined to not only capture the media’s attention but elevate their status as household names, taking coverage of triathlon to unprecedented levels both in Britain and beyond.

Rio was also significant on two other levels…Helen Jenkins had finished fifth in London and that achievement was superseded by two British women in Brazil, as Vicky Holland took bronze with training partner Non Stanford just behind her in fourth. 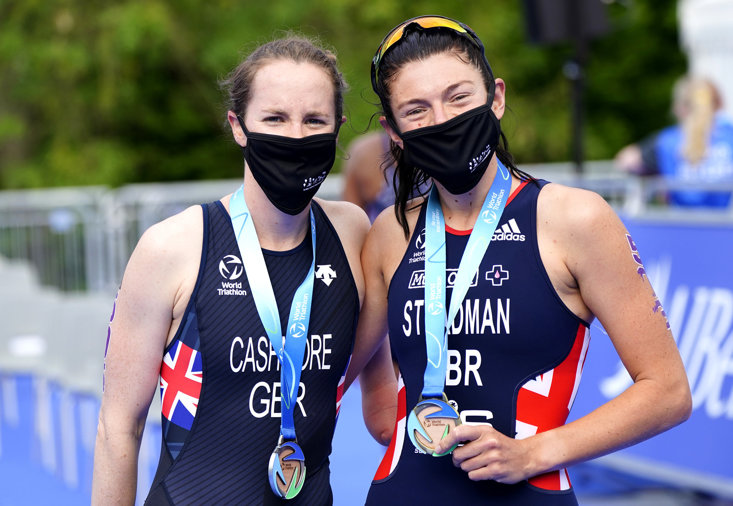 Rio also marked the sport’s debut in the Paralympics, with arm amputee and former swimmer Lauren Steadman hitting the British headlines as well as the podium with a brilliant silver.

Last Saturday Steadman was in action again, looking to fine tune her preparations for what will be a high-quality British team in Tokyo.  She took on former Paralympic swimming team-mate Claire Cashmore (who beat her to the world title in 2019) and reigning Paralympic champion Grace Norman of USA.

As a showcase for ParaTri it was first class and a great climax to Saturday before the city’s famous brothers took centre stage the next day. Steadman was a worthy winner and Cashmore took the battle for second ahead of Norman, who was so shattered she had to be helped away from the finish line in a wheelchair. As I said, no short cuts in this sport.

As I headed back to my car for the long drive home ready to watch Sunday’s epic races from afar, I caught a glimpse of Alex Yee jogging a section of the course. We exchanged a smile and I noticed how incredibly relaxed he looked. No wonder, with the form he was to show the following day.

After his fourth-place finish in Yokohama in the first race of the season (Jonny Brownlee was 23rd), Yee brought his A-game to Leeds at just the right time. He had to leave selectors in no doubt that he could deliver under pressure in Japan if they were to choose him above Alistair Brownlee for the second slot alongside Jonny, who had already been pre-selected along with Vicky Holland, Jess Learmonth and Georgia Taylor-Brown.

What a time it was to produce his maiden world series win, with the reigning Olympic champion succumbing to the ankle injury which had troubled him for months, along with an unfortunate disqualification for an unintentional incident in the water. And do you know what? In a funny kind of way that changing of the guard is in part the biggest compliment Alex Yee could have handed to Alistair.

Alex was 14 when his great hero secured the first of his two Olympic titles and those images were enough to fuel the fire of a young boy who would go on to grasp his chance to follow in giant footsteps nine years later. Barring a formality, Yee is on the plane with Jonny – but not Alistair – Brownlee. As I said last week, that cycle of inspiration and motivation is surely the very reason the Games must take place next month.

Triathlon is in good shape. And so too are the Brits who will represent us at both the Olympics and Paralympics.

WALKER THE TALKER: THE OLYMPIC GAMES HAS THE POWER TO INSPIRE LIKE NO OTHER EVENT
x
Suggested Searches:
Manchester United
Liverpool
Manchester City
Marcus Rashford
Premier League
More
boxing
From Broadway To Hostage Negotiation: Ali's Best Moments Outside...
Muhammad Ali transcended the world of not just boxing, but sport as a whole, like no other athlete who [ ... ]
football
Zaha's Double, 1989 And 'Poogate': Inside The Brighton v Crystal...
This article first appeared in The Sportsman on 27th September, 2021 Crystal Palace against Brighton [ ... ]
boxing
Remembering The Fight That Sparked Sport's Greatest Rivalry:...
This article first appeared in The Sportsman on 12/01/20 “I hated Ali. God might not like me talking [ ... ]
boxing
George Foreman’s Faith: How The 45-Year-Old Heavyweight Stunned...
George Foreman swept through the heavyweight division like a hurricane, obliterating nearly all who [ ... ]
boxing
Last Round, Folks: When Boxing’s Invisible Champion Was Blitzed...
History has not been kind to Floyd Patterson. Countless world champions have drifted through the annals [ ... ]
boxing
The Life And Times Of Heavyweight Legend Jack Johnson
What do Alan Turing, The Doors frontman Jim Morrison and the comedian Lenny Bruce have in common? These [ ... ]
boxing
Pacquiao: From Poverty-Stricken School Drop-Out To Eight-Weight...
"I knew without a doubt I would become a fighter - I knew that the underdog can, and often does, [ ... ]
sports
Hulk Hogan, Mr. T And Madison Square Garden's Five Greatest...
It’s named after the fourth President of the USA. It’s where George Harrison had his concert [ ... ]
snooker
VR Mishaps, Pig Farms And American Hustles: When Ronnie O’Sullivan...
As it's snooker legend Ronnie O'Sullivan's 46th birthday, we thought we'd take [ ... ]
sports
Meet The Man Who Climbed Everest, Partied For A Week, Then Climbed...
This article first in The Sportsman on 08/12/19 There’s nothing normal about Nirmal Purja. After [ ... ]
motorsport
Frank Williams - A Formula One Pioneer Whose Team Went To The...
For much of the 1980s and 90s, Williams Racing was the biggest name in Formula One and Frank Williams [ ... ]
football
How Cantona Made Manchester United The Dominant Force Of The...
It started with Leeds United making an enquiry about signing Denis Irwin and finished with Manchester [ ... ]
football
Almost 30 Years Since THAT Goal, Davide Gualtieri Is Still San...
8.3 seconds, 28 years ago. That’s all it took for part-time footballer, part-time computer [ ... ]
boxing
River Wilson Bent Talks Coventry City, Newborn Baby And British...
“Imagine if Coventry City made it to the Premier League and I brought the British title home for [ ... ]
football
Neil Warnock - The Record Breaking Football Lover That Just...
When the whistle blows at Kenilworth Road for Luton Town's home match against Middlesbrough on Tuesday [ ... ]
football
Leicester's City Progress Is Proof That Vichai's Vision Has...
On this day three years ago Leicester City lost their influential owner, Vichai Srivaddhanaprabha in [ ... ]
rugby-league
The Birth Of The Grand Final: Rugby League's Biggest Of Big...
“I’ve said it for years… the last game of the season should be the most important,” [ ... ]
football
Celebrating Arsenal's Invincibles With The Stats That Tell The...
There’s Sergio Agüero winning it in Fergie time. Liverpool finally ending 30 years of hurt [ ... ]
football
From Balotelli To Bullard, The Premier League's Greatest Ever...
It's been a full decade since Mario Balotelli lifted his shirt in Manchester City's 6-1 [ ... ]
motorsport
On This Day: Rookie Lewis Hamilton Loses F1 Title In Controversial...
On this day in 2007, we witnessed perhaps the greatest end to a Formula One season we have ever seen. [ ... ]
motorsport
How Lauda's 140mph Crash Marked The End Of The Age Of Innocence...
There are few worse moments to lose control than when driving at 140 miles per hour. The events on just [ ... ]
football
FA Cup Round-Up: Brilliant Buxton Make First Round As Dorking...
It was a night when Dorking Wanderers saw their dreams dashed by Hayes and Yeading, Stratford made some [ ... ]
us-sports
Celebrating Jim Brown - The NFL Movie Giant Who OJ Robbed Of...
Before OJ there was the OG. The Original Gangster. In fact he was front and centre of an action-packed [ ... ]
football
Sheriff Tiraspol - The Champions League Club With Two Faces
On the surface, it has been the underdog story of the Champions League so far. Never before has a club [ ... ]
boxing
From Taming Tyson To Bashing Buster, Evander Holyfield’s Best...
Today marks the 59th birthday of one of the best boxers to lace up a pair of gloves in the modern [ ... ]
football
Fernando Torres - Atletico's Local Hero, Liverpool's Tainted...
‘This means more’ is Liverpool’s oft-derided motto, but when they face Atletico Madrid [ ... ]
football
On This Day In 1987: The Rangers v Celtic Shame Game
Whatever the circumstances when Rangers face their Glasgow neighbours Celtic the [ ... ]
athletics
On This Day In 1968: The Greatest Sporting Protest Of All Time
Some sporting images will stay with us forever. Muhammad Ali standing over Sonny Liston, Michael Jordan’s [ ... ]
football
Dorking Wanderers Aiming To Complete The FA Cup's Ultimate Underdog...
Something is stirring in the sleepy, stockbroker-belt Surrey market town of Dorking. And if the Wanderers [ ... ]
boxing
Outside the Ropes: Jennings Gym - Training, Tunes And Gardening...
Jennings Gym is not your average boxing gym. Tucked away on the ground floor of a former cotton spinning [ ... ]