They say the grass isn’t always greener on the other side, but for Charlotte Bankes it most certainly was!

The snowboarder will be competing in her third Winter Olympic Games, and her first for Team GB, in Beijing after switching allegiance from France to the country of her birth after PyeongChang 2018.

It’s strange to think someone who moved from Hemel Hempstead to the French Alps at the age of four would achieve more success under the British banner. But, the 26-year-old says the decision gave her a “second start” in the sport and it definitely got her faltering career back on track.

Bankes was a keen skier as a kid but swapped to snowboarding to follow in the footsteps of brothers William and Thomas, who have both competed internationally in the sport.

She started competing for France in 2010, but suffered a near career-ending pelvis fracture when she crashed a year later.

“It was my first year racing internationally; I had just finished my first races and we were finishing up a training camp. It was my last run of the day; I tried out a jump and landed on the flat [of the snowboard] with straight legs, which wasn’t a good idea,” reflected Bankes.

“I got down to the bottom of the track, took my board off, and found that I couldn’t walk. As soon as I got back to doing jumps, anything with an impact, I felt pain.

“We couldn’t find the solution; we tried more rehab work, but I spent the next two years not being able to snowboard at 100 percent.” 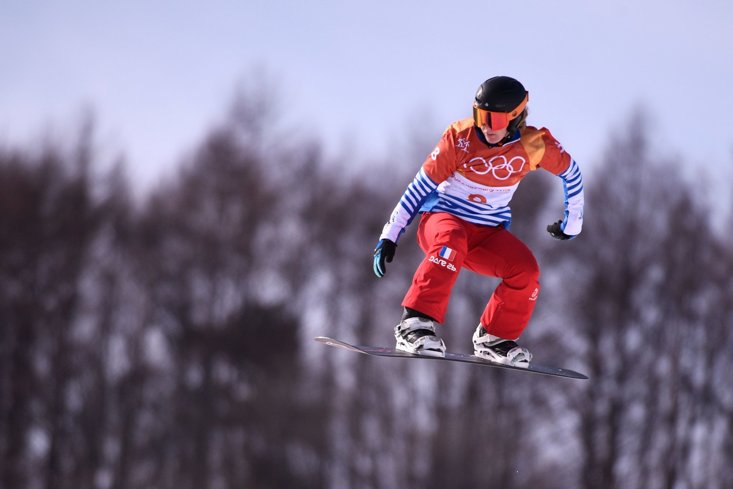 Despite daily battles just to get out on the snow to practice, Bankes qualified for Sochi 2014 and came 17th in the bordercross competition. Following the Olympics, Bankes had an operation to install a metal plate into her troublesome hip, but still struggled with debilitating constant pain.

She finished seventh in South Korea four years later before making her career-saving decision to compete for Great Britain in a last-chance bid to reach her full potential.

Bankes admitted: ”I was at a point in my career when I wasn’t enjoying snowboarding anymore; primarily because of my hip, but also due to my inconsistent results in competition. I really couldn't see myself doing another four years of the sport.

“So I felt the options I had at that point were to either give up, or switch to compete for Great Britain. For me, it was the start of a new career and it’s gone really well.

“Sorting out my hip and health problems was one of the big things and meant I could train properly. I had doubts as to whether it would be possible and there have been a lot of ups and downs. I wasn’t getting results as fast as I’d have liked but I had to be patient and let the time come.

Her results improved dramatically with the Union Jack on her back. Bankes secured six World Cup race podium finishes in three years as well as a memorable silver medal at the 2019 World Championship in Utah.

And she’s desperate to make it third time lucky on the sport’s grandest stage after making history last year. No British woman had won gold in an Olympic snow sport event World Championship since Evelyn Pinching’s famous three-medal haul in 1936.

The Swedish slopes were the scene of her greatest triumph to date as she ended the country’s 85-year wait for a female winter world champion in dramatic fashion. Bankes pipped Italy’s Olympic gold medallist Michela Moioli, who will be her country’s flag bearer in Beijing, by just 0.08 seconds! Incredible.

And Bankes represents one of Britain’s greatest chances of topping the podium in the Chinese capital after “the best season I’ve ever had”.

“There’s always going to be a bit more pressure at an Olympics, everyone’s watching and it’s the only time in four years everyone sees our sport,” admitted Bankes.

“That’s what brings on the pressure, that and trying to put on the best show for all those people watching, those who have got up early to watch back home. On the other hand, the race itself is the same as a World Cup – all the best girls will be there bringing their a-game. I’ll give my best on the day and won’t give up until I cross that finish line.”

Snowboarding starts on Saturday February 5. Bankes will be gunning for gold in the snowboard cross on Wednesday 9 February. Qualification gets underway at 3am GMT, with the gold medal race scheduled for 7.45am.