Greg Rutherford is used to jumping a long way for his gold medals, but Britain’s celebrated Olympic long-jump medal-winner knows trying to achieve another coveted podium will really take him out of his comfort zone.

That’s because, aged 35 – and a decade after his famous gold at the London 2012 Olympics – Rutherford has an audacious dream to become the first Britain to win gold in both the Summer and Winter Games.

The American Eddie Eagan is the only man to have managed it to date, winning gold as a light-heavyweight boxer in Antwerp in 1920 and then claiming victory in the four-man bobsleigh team for his country at Lake Placid 12 years later.

No mean feat then, especially when you’re attempting to earn your stripes in a sport which has served Team GB well down the years. We have won a gold, silver and three bronze medals in the event.

Rutherford, of course, is best remembered for his role in a memorable night in London almost ten years ago. His incredible gold-medal winning jumps cemented him in folklore on a night when Sir Mo Farah and Dame Jessica Ennis also captured the imagination of the nation with their stunning triumphs in the capital.

And the Milton Keynes-born athlete would loving nothing better than to make history again for his country by securing his place in the final four-man team for Beijing next month.

“From here to Beijing, I’ll be doing exactly what I did as a jumper every single day,” stressed Rutherford, in a recent interview.

“I’ll be mentally preparing myself to try and win by going through those same rituals that I did before London and Rio.

“I’m not here to be a tourist. And this team is not just planning to make up the numbers.

“We all want to give it our absolute best to try and come away with something as well – something very, very special.” 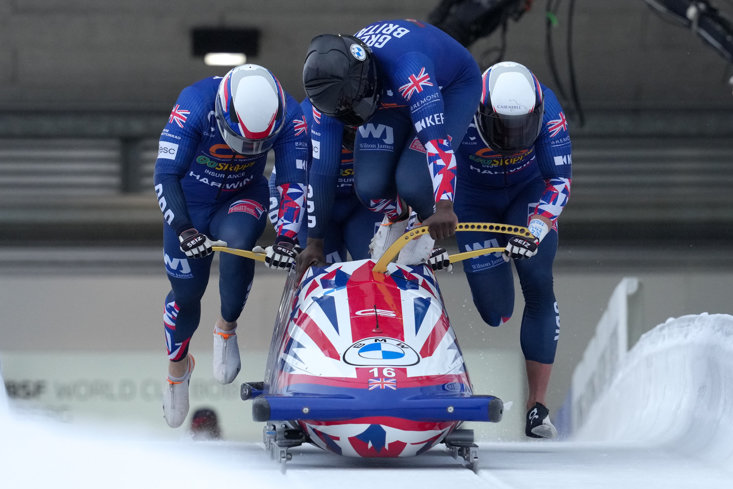 Rutherford made his international bobsleigh debut last Sunday, but remains in a tight battle to still qualify for the Olympics after a shoulder injury originally rocked his preparations. But the long-jumper is a driven athlete – and his Commonwealth and European gold medals are further proof of his medal-winning calibre.

Bobsleigh, though, is a completely new discipline for Rutherford, who has tasted success in Beijing previously when he won the 2015 world title. Britain’s record holder in both indoor and long jump has plenty of the physical attributes needed to succeed in the sport.

He prides himself on his fitness, but are the after-burners still firing as well as they were when he won his last notable medal, a commendable bronze at the Rio Olympics in 2016?

Rutherford retired from long jump competition two years later, but his thirst to star at the top level has never left him. And for someone who has spent a lifetime dedicating himself to his craft, it makes for an intriguing watch to see whether he can succeed in his sledding career.

“Don’t forget Team GB won a medal in 2014 after the Russians were banned,” stressed Rutherford to The Guardian.

“But there is a little bit of a Cool Runnings theme for our team too, given we are not funded by UK Sport and we have to figure it all out ourselves. And the great thing about it is there’s a chance of a fairytale ending.”

A documentary team have followed Rutherford throughout his journey, charting his progress ahead of Beijing. And his Team GB teammates Lamin Deen, Joel Fearon, Ben Simons and Toby Olubi will also star in the programme, which is due to be aired in the build-up to the Games.

“There were a few doubters when I said I wanted to make the Winter Olympics in April, but I always back and believe in myself and I am absolutely delighted to have been selected,” reflected Rutherford

“I am extremely confident we can qualify for Beijing and go on to achieve something very special.”