Montell Douglas will make history at next month’s Winter Olympics.

Douglas, who celebrated her 36th birthday on Monday, will become the first women to represent Team GB at the both the summer and winter Games.

Former long-jumper Greg Rutherford had been gunning to qualify in bobsleigh, a decade after his gold-medal Olympic success. Unfortunately, he failed in the final round of qualifying for the four-man discipline.

Douglas, though, went that crucial step further and achieved the magical qualification needed to compete in Beijing (4-20 February). And what an incredible achievement given she is a runner by trade – and transferring from the track to a bobsleigh is a massive change. Of course, running and speed are key ingredients to the bobsleigh, but there is a hell of a lot more skill to guiding a hurtling sled down an icy course.

Douglas will be the ‘brakewoman’ for bobsleigh partner Mica McNeill in the two-woman sled.

It marks a remarkable amount of dedication and commitment from Douglas who was the reserve for the sled for the last winter Olympics in Pyeongchang, Korea, four years ago.

And, perhaps, what is even more staggering is that Douglas’ last Olympics was 14 years ago! She competed for Team GB in the 100m spring in Beijing – and so returning to the Far East represents a full circle in her career as an international athlete.

“I was asked a few times to give the team a go, the first time was probably in 2014, but I was still very much into track,” recalls Douglas.

“I just went to do the testing, lots of sprints with a sled, and I got like, 1000 points - it had never been done before. 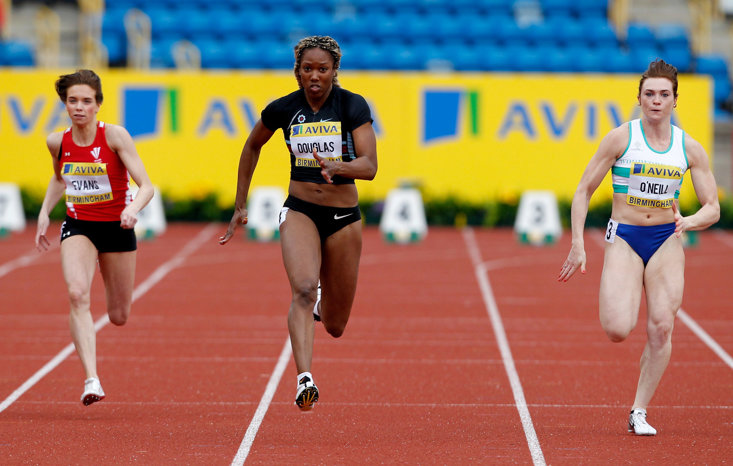 “I was like, is that good?! And they said... that's really good. Six months down the line, I was at my first World Cup.”

“[So] to come full circle, after 14 years and at the end of my career, that blows my mind,” admitted Douglas, a former British record holder over 100m with a time 11.0 seconds.

“You're never too old, it's never too late, you should always dream and dream big."

"I'm over the moon to be representing women. There have been many male summer and winter Olympians, so I'm more thrilled about leaving a legacy like that behind than anything else.

"It's such a strange feeling. Beforehand, I had thoughts of how it would feel, but I think it's more of a relief.”

Douglas competed in Korea, but again it was on the track that she was trying to win medals. Now she is trying to achieve a memorable feat by trying to win an Olympic medal in a sled.

"It's been a very different journey to the Games this time round but I've loved every moment of making it happen. I can't wait to get back on the ice out there and represent Team GB."

Former British sprinter Douglas took up the bobsleigh six years ago and has waited patiently for her chance to once again try and shine on the greatest stage of all.

“I was 29 when I came into bobsleigh, which is late in most sports, but it's given me the opportunity to extend my career by essentially starting a new one,” she added.

“I came in and wanted to be better, I wanted to know how to do that. I’ve had to hone my craft, watch some of the best bobsledders in the world and know what to do.

“You never stop learning. If you have that mindset, well that’s when you can be successful.

“For anyone who thinks their dreams are dead when they get older - it's not true. It's a privilege to be in this position, if I am there, it would mean a lot not just for myself, but for a lot of people around me.”

The bobsleigh competitions starts on the second week of the Games, with Douglas and her seven Team GB teammates will be looking to spring a few surprises.