Australian cyclist Rohan Dennis has paid credit to his sports psychologist after storming to a second successive Road World Championships crown this week.

His triumph follows a turbulent few months during which his temperament and mental well-being were called into question following his decision to quit the Tour de France midway through the three-week event.

“There’s been a lot of work done off the bike mentally to get me prepared just to line up here, let alone win,” Dennis said from the winner’s podium.

“It’s a reminder that it wasn’t just my body, my body was always good. It was a lot of work off the bike from my sports psychologist, David Spindler, and almost a bit of a thank you as well for what he had done for me.

“He got me to believe and be more confident and not be so negative in my head, to be more positive about the good things that are going on in my life.

As he crossed the line in Yorkshire to keep the rainbow jersey, Dennis suggestively tapped his helmet with his finger.

“I mean physically I have always had it, but it was always the negativity in my head thinking not the positive things,” said the Australian. “It has been the toughest period of my career, it was almost breaking.

“I was reminding myself today it was all in my head.”

Dennis’ victory came twelve months on from bagging the rainbow jersey for time-trial success in Innsbruck, but this time around he arrived at the start line in Northallerton, Yorkshire, on a BMC Timemachine and with a Kask helmet, shunning his team Bahrain-Merida gear and wear.

In Yorkshire when he made Harrogate 54km later, one minute and nine seconds ahead of 19-year-old wunderkind Remco Evenepoel for his second world time-trial title - in either an athletic display of defiance or a remarkable turnaround from the position he found himself in 10 weeks ago. 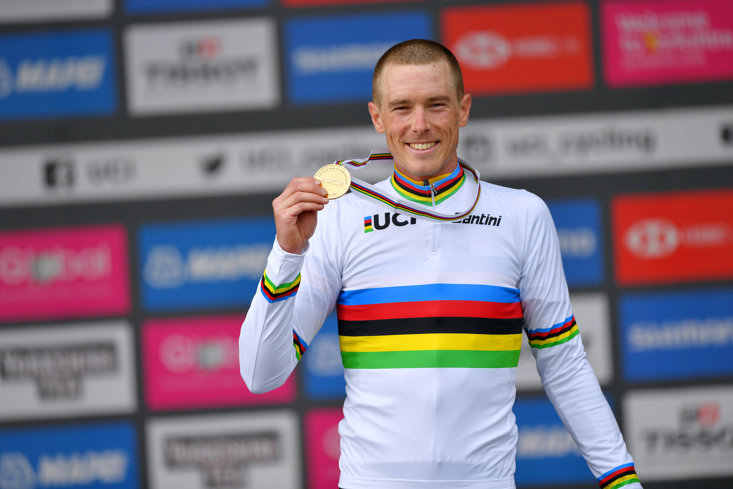 Dennis caused a stir in the summer by withdrawing from the Tour de France suddenly, with 84km to race of stage 12. It was a stage he had expected to win having taken the Tour of Switzerland trial the month before.

No explanation was given, just a vague, almost-apology provided.

“Obviously the individual time trial tomorrow had been a big goal for me and the team, but given my current feeling it was the right decision to withdraw earlier today,” Dennis said at the time.

“I wish my teammates the very best for the remainder of the race and would like to thank all the Tour de France fans who cheered for me, at home and on the roadside, since Brussels. I will hopefully be back competing in this great race again over the coming seasons.”

His Bahrain-Merida team initially compounded the bewilderment of followers of the tour with their sports director Gorazd Štangelj’s immediate statement.

"We are also confused. Let's say I'm disappointed about what happened because actually we expected a big effort from him tomorrow,” said Štangelj. “It was his decision to stop. He just said 'I don't want to talk' and abandoned the race.

“His condition is not bad, he’s good enough to perform at the Tour de France. For sure it has nothing to do with his condition.”

One of the team’s partners, McLaren Pro Cycling, soon tried to help quell the fallout, through managing director John Allert via Cycling Weekly.

“I think it would be wrong to try and pinpoint just one reason why Rohan withdrew,” said Allert. “It’s a lot more complicated and a lot more sensitive than that.”

But that might turn out to be Dennis’ last race for Bahrain-Merida, with suspicion that a dissolution is down to the disagreement over equipment choices, something that was accentuated with Dennis’ appearance in Yorkshire.

Previous suggestions he would continue to ride for Bahrain-Merida in 2020 have been cast into doubt following Dennis’ decision to compete in the World Championships on the same - though noticeably unbranded - BMC which had previously led him to TT victory in Austria 12 months ago.