Pedals churning, tongue wagging, his face a portrait of pleasure and pain; Thomas Voeckler cut a mesmeric figure at the 2011 Tour de France during which the French cycling hero famously sported the yellow jersey for 10 gripping days, only to then heartbreakingly miss out on a podium finish.

The upcoming 106th edition of the Tour de France will be the 34th successive year in which France will attempt to produce a homegrown winner of La Grande Boucle. You have to flick the history books back to 1985 when Frenchman Bernard Hinault equalled the five-haul record of compatriot Jacques Anquetil and Eddy Merckx.

While Voeckler was never able to realise his dream of winning the Tour de France, the now 40-year-old will forever be remembered as one of the great mavericks of the sport who won an army of fans thanks to his blood-and-guts attitude, swashbuckling style, and voracious appetite for bold lactic-acid inducing attacks and daring, aggressive riding. He was also well fond of a facial expression or 10; ranging from unimaginable suffering to triumphant jubilation.

In total Voeckler won four Tour de France stages, and spent a total of 20 days kitted out in the yellow jersey; the first 10 of which came in a breakthrough 2004, only his second appearance in the showcase spectacle. The French national champion first won the maillot jaune in what would become his trademark fashion, breaking away in a group for virtually the whole of the fifth stage. He valiantly clutched onto it for 10 days amid intense media focus and frenzied fan furore from the home support, and managed to fend off a certain Lance Armstrong in the Pyrenees, before eventually succumbing to the American in the Alps.

Five years later he recorded the first of his four Tour de France stage wins. The serial escaper was part of a six man break for most of the day, before storming off solo with three miles to go to complete a sweet success ahead of the sprinters.

The following year he conjured up one of the rides of his career in winning stage 15. He launched a vicious solo attack over the top of the Hors catègorie Port de Bales, then negotiated the descent in electric fashion. Such was the gap he opened up that Voeckler could afford to drink in the adoration from the crowd as he cruised to victory. 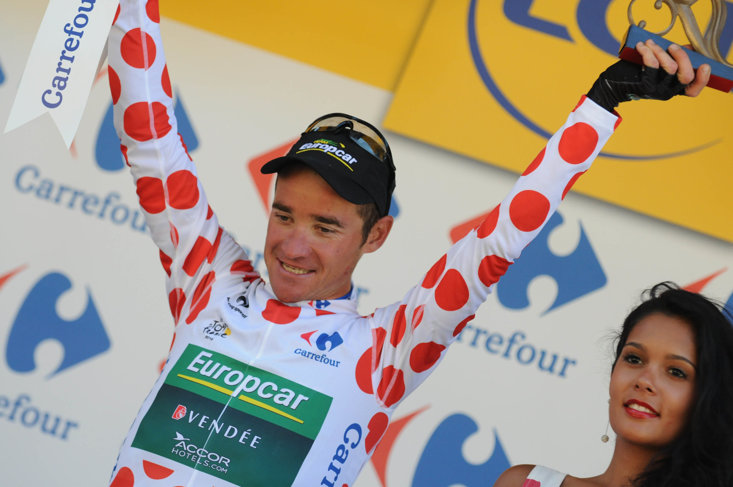 Fast-forward to the 2011 Tour de France when Voeckler once again gripped a cycling-obsessed nation. He may not have won a stage, but he tasted yellow once again on stage 9 after he managed to avoid a horrific clash with a TV car, and subsequently claimed the overall lead. Voeckler was drenched in yellow for another 10 day period, and during this time he reeled in his usual attacking instincts in order to doggedly battle the main general classification contenders in the Pyrenees and Alps.

But, despite his herculean efforts, Voeckler agonisingly came undone just two days before the processional Champs-Élysées. Crushingly, he was unable to secure a podium finish, instead having to settle for 4th as he became the highest-placed Frenchman in 11 years.

In 2012 he may have finished down the Tour in 26th, but this could arguably be labelled as his most successful as he won the polka dot jersey - King of the Mountains - plus two stage victories: 10 and 16. The second of which saw him conquer four colossal climbs and win by nearly two minutes.

"If we take the 2012 Tour, that resembles me better. Two stage wins, the polka-dot jersey - which represents panache - always in breaks, always fighting - that corresponds more with my way of racing," he told Cycling News.

Voeckler put away his bike in 2017, but last month it was revealed that he will become the head coach of the French national road team 2020, and will no doubt be bidding to orchestrate success at the Tokyo Olympics. Whatever happens in his new managerial role, Voeckler will always be fondly remembered as true cycling maverick of his generation.