Yesterday Recap - A frantic last 50 kilometres whittled the peloton down before a chaotic uphill sprint but nobody could beat Peter Sagan once again, who was too cool, too quick and too powerful for Sonny Colbrelli, who produced a fantastic sprint and looked to have the stage for a few seconds. Phillipe Gilbert was third after a lot of activity by Quick-Step whilst Alejandro Valverde was fourth, just missing out on bonus seconds.

Greg Van Avermaet kept his yellow jersey although the gap between him Philippe Gilbert is now just three seconds whilst Geraint Thomas is just 5 seconds back as well.

Today’s Stage - Quiet for much of the day outside of the Côte de Ploudiry (Category 3, 1.5km at 7%), the Côte de Roc'h de Trévézel (Category 4, 2.5km at 3.5%) and an intermediate sprint in Plouguernével before the Mûr de Bretagne.

The famous finishing climb is taken twice in a 16-kilometre circuit that’s ridden clockwise. The riders take the first climb of the de Mûr de Bretagne (which itself is in a village) and then to the close village of Saint-Mayeux. Just before that is the new sprint with bonifications available - 3s, 2s, and 1s time bonuses for the first three racers over the line. The riders then turn right to Saint-Gilles-Vieux-Marché, before repeating the Mûr de Bretagne for the final time.

The key to riding it twofold; First one needs positioning, ideally in the first 30 if you’re to win the stage, and timing, go too early and you can blow up and lose several seconds, a minute on a bad day, but delay too long and it’s difficult to catch a leader once they hit the last 5-600 meters and the road flattens out. 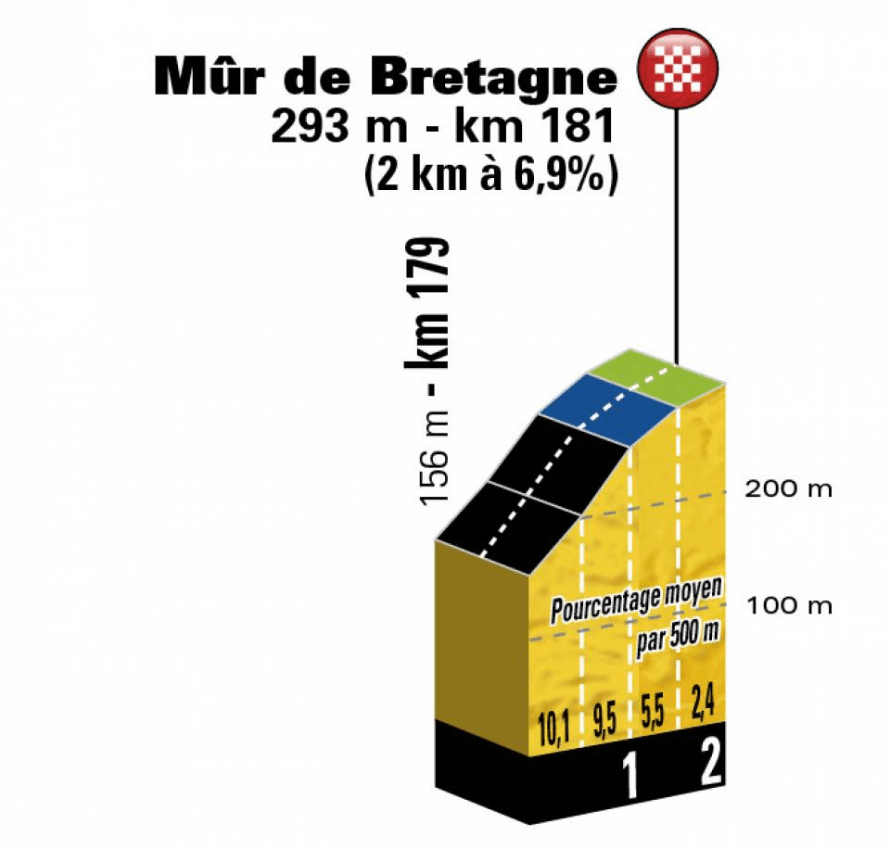 The Alpe dâ€™Huez of Brittany

The Contenders - Too hard for Peter Sagan? Absolutely not as his 4th here in 2015 shows and his timing and cool-headedness is outfoxing everyone so far. He must start as the favourite although perhaps this finish suits him less than it does the sprightly uphill riders.

Quick-Step have eyes on a second yellow jersey and both Phillipe Gilbert and Julian Alaphilippe were part of the group that contested the finale in Quimper. Gilbert perhaps went too soon, having hit the front with 650 metres to go, and might ride more quietly today with eyes on a late burst to take the jersey from Greg Van Avermaet, who himself was seventh yesterday. Both are big contenders.

Alejandro Valverde was fourth there having made his way quietly late but this is perfect territory for El Bala and the bonus seconds would be a real boost for Movistar. He’s in great form as today and Sunday shows.

Dan Martin was sixth yesterday and not a threat to the likes of BMC for the jersey so has to be considered, he lost a lot of time against the clock but is clearly riding very strongly, and Vincenzo Nibali was 10th but should enjoy this straight up ramp a lot more than the tight turns of Quimpert. Sunweb lost Michael Matthews but they have Søren Kragh Andersen as a replacement and Tom Dumoulin is still well placed overall, watch out for them to wait and pounce late.

Froomewatch - There was a mechanical issue for him, although it took place 64 kilometres from home and he chased back on sharply. Sky were to the front of a high paced finale with some brilliant riding in the last 10 kilometres to keep him and their main men safe and he came in 14th, a decent hit out where he didn’t lose much time. Today we will see a better test of his form on the Mur, a longer effort even if after a quieter stage.