Athletics
News
Dina Asher-Smith and Kirsten Warholm are back in action in Oregon
Simon Lillicrap
14:25, 14 Jul 2022

The World Athletics Championships begin tomorrow and with the BBC showing live coverage of one of the most prestigious events on the calendar, there are a whole host of stories to watch out for on the track. We’ve whittled it down to five things you should keep your eye on over the next ten days.

We may have been forced to wait an extra year, but for the first time in the competition’s 39-year history, it will be hosted in the United States. We’ve had 17 different hosts so far but finally, the country that arguably loves athletics more than any other will get the chance to host in Eugene, Oregon.

Hopefully, the 30,000 capacity stadium will be packed to the rafters as the US gets to embrace a sport they have been so successful in. It’s worth keeping an eye out for the attendance, atmosphere and the general vibe around the championships. We are hoping it will be a resounding success.

Africa’s fastest man is facing a race of his own to even make it to the start line of the World Championships, due to an issue with his visa to enter the United States. He will leave Kenya at 6pm today, and is set to land in the USA just three hours before his heat begins on day one.

If the flight lands on time, he will have to get through US customs, travel to the arena, get his correct accreditation to compete and then complete a full warm-up to make sure he is ready to race. It’s a dramatic tale before the race has even begun, but Omanyala is unfazed.

"If I make it to the starting line, there will be fireworks. I thrive on setbacks." 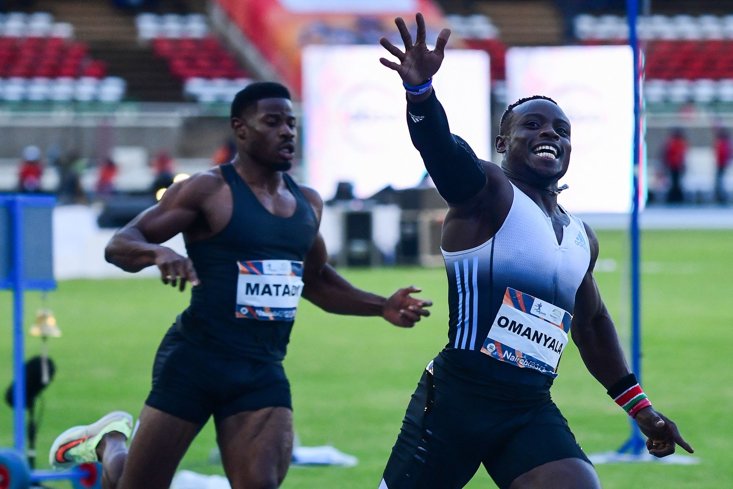 It just wouldn’t be a World Champs without Shelly-Ann Fraser-Pryce. The 35-year-old ‘pocket rocket’ has defied Father Time with her longevity and is targeting her tenth gold medal at this event.

To give her achievements some context, when Usain Bolt won gold and broke the men’s 100m world record in 2009, Fraser-Pryce won gold in the women’s 100m. Bolt retired in 2017 - five years on, his compatriot is still going strong and back for more.

She’s joined by fellow Jamaicans Elaine Thompson-Herah and Shericka Jackson as they make up a trio that could sweep the medals in Eugene. They secured a 1-2-3 at the Tokyo Olympics in the 100m and could do exactly the same here, but the winner is far from certain.

It will be well worth a watch, just to see Fraser-Pryce run again.

The Brits head Stateside. Dina Asher-Smith and Katarina Johnson-Thompson are both hoping to defend their titles and put injury troubles behind them. KJT has a new coach and a new outlook so her performance level will be worth keeping an eye on while Asher-Smith is Britain’s most exciting sprinter.

But there’s also a bubbling level of intrigue around 20-year-old Max Burgin. He was just ten-years-old when David Rudisha broke the 800m world record at London 2012, a time nobody has got within a second of since, but it was enough to inspire him.

Over a year ago, injuries stopped his Tokyo hopes, but now he is back and hopeful to make his big impression at the World Championships. Don’t rule him out of doing something special. 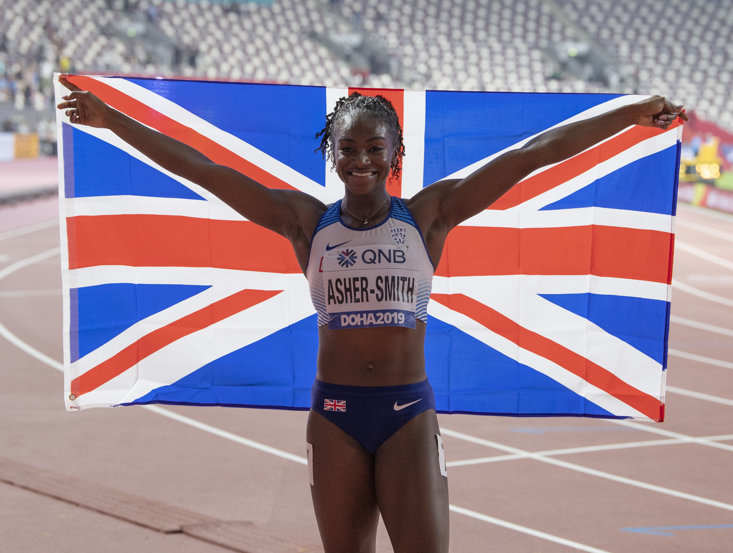 The 400m hurdles world record holder and one of the standout names in athletics hasn’t managed to complete a race this season. After pulling his hamstring in a Diamond League event in Morocco, he has been attempting to get fit, with these championships the big target.

By all accounts, he looks to have succeeded, with the heats on Saturday the first time we will get to see the Norwegian in action. Twelve months ago, he put in arguably the display of the Tokyo Olympics as he broke his own world record by almost a second in the 400m hurdles final. He might not go close to that 45.94 time here, but it will be a delight to see him back on track.

x
Suggested Searches:
The Sportsman
Manchester United
Liverpool
Manchester City
Premier League
More
athletics
Toni Minichiello Handed Lifetime Ban From UK Athletics For Sexual...
Toni Minicihello has been permanently banned from coaching by UK Athletics over sexually inappropriate [ ... ]
athletics
Sydney McLaughlin's 400m Hurdles - One Of The Greatest World...
Usain Bolt’’s 9.58. Roger Bannister’s four-minute mile. Eliud Kipchoge’s two-hour [ ... ]
athletics
Shelly-Ann Fraser-Pryce vs Usain Bolt: Who Is The Sprinting...
There can be no doubt about it now. Shelly-Ann Fraser-Pryce is the greatest female sprinter of all time. [ ... ]
athletics
Mo Farah Calls Time On Track Career As Britain's Greatest Ever...
This week Mo Farah called time on his track career, but he leaves the stadium circuit as one of the [ ... ]
athletics
Retiring Allyson Felix Leaves A Legacy That Has Changed Sport...
At the end of this athletics season, Allyson Felix will hang up her spikes. At 36 years old, and as [ ... ]
athletics
2012 Forgotten: The Great Shame Of UK Athletics' Abandonment...
It is quite hard to grasp that we are just a couple of months away from the 10-year anniversary of London [ ... ]
athletics
Can Ferdinand Omanyala Become Africa's World Champion And Break...
The blue riband event of men’s athletics is in need of a new superhero. Usain Bolt’s retirement [ ... ]
athletics
On This Day In 1993: Olympics Villain Ben Johnson Is Banned...
It was dubbed ‘The Dirtiest Race in History’. The Olympic 100m final in Seoul 1988. Canadian [ ... ]
athletics
London 10,000 Offers Mo Farah Chance For At Least One More Hurrah
Sir Mo Farah is a British athletics icon and the nation’s most successful track athlete in [ ... ]
athletics
One Dog, One Doctor And 26 Miles: Phil Sesemann Steals Headlines...
Having a dog named after men’s marathon world record holder Eliud Kipchoge was certainly a good [ ... ]
athletics
32 Champions To Be Crowned As Diamond League Season Comes To...
It’s been a month since the curtain came down on the 2020 Olympic Games, and a whole host of athletes [ ... ]
athletics
Arigato Tokyo: Historic Paralympics Has Us Anticipating More...
The Tokyo Paralympics came to an end this weekend, closing the book on another spectacular carnival [ ... ]
athletics
Dame Sarah Storey And The Five Greatest British Paralympians...
The Tokyo Paralympics is drawing to a close and there have been some sensational moments for Great Britain. [ ... ]
athletics
Thompson-Herah On The Verge Of History After Closing In On 100m...
Two of the longest-standing world records in athletics could be in danger after Elaine Thompson-Herah’s [ ... ]
athletics
Zheng Tao, Ellie Simmonds And The Most Inspirational Paralympic...
The Tokyo 2020 Paralympic Games are almost upon us, and it is time to be inspired by some truly [ ... ]
athletics
Heartbroken Dina Asher-Smith Pulls Out Of Olympic 200m After...
Team GB’s gold medal hopeful Dina Asher-Smith was left in tears as she revealed she is going to [ ... ]
athletics
Shelly-Ann Fraser-Pryce: The 100m Sprinter That Dina Asher-Smith...
If Team GB’s Dina Asher-Smith is going to win Olympic gold in the women’s 100m sprint [ ... ]
athletics
Hat-Trick Seeking Jonnie Peacock Among 32 Athletes Added To...
Reigning Paralympic champion Jonnie Peacock who has been selected for the T64 100m, will look to make [ ... ]
athletics
Tokyo Olympics: Why The Women's 100m Final Is The One To Watch
Step aside, fellas. The women are here to show you how it’s done. For years now, the men’s [ ... ]
athletics
British Athletics Grand Prix: Five Talking Points Ahead Of Tokyo...
On Tuesday evening, many of Team GB’s Tokyo-bound athletes were given one final major outing before [ ... ]
athletics
Katarina Johnson-Thompson “Fully Fit And Ready To Go” Ahead...
Katarina Johnson-Thompson will be eyeing success at the British Athletics Grand Prix in the bid to be [ ... ]
athletics
Walker The Talker: Daley Thompson Is The Role Model Team GB...
Having the chance to interview an Olympian is something never to be taken for granted. If ever you find [ ... ]
athletics
Laura Muir, Dina and KJT Lead A Strong Team GB In Tokyo As Mo...
Team GB have confirmed the 65 athletes that will be representing them in track and field in Tokyo this [ ... ]
athletics
British Athletics Championships: Five Things We Learned Ahead...
It’s a proud moment for any athlete to claim a win at the British Championships, but the best [ ... ]
athletics
Walker The Talker: Mo Farah Looks To Turn Back The Clock In...
Great champions don’t last forever, that’s why their periods of dominance are so enthralling [ ... ]
athletics
Five To Watch At British Athletics Championships With Olympic...
The British Athletics Championships take centre stage this weekend in Manchester as the Tokyo Olympics [ ... ]
athletics
Walker The Talker: Win Or Lose, Olympians Have The Power To...
Inspiration is a notion heavily associated with the Olympic Games and it’s a word I’ve mentioned [ ... ]
athletics
Technology Could See More World Records Fall As Letesenbet Gidey...
A lot can happen in two days, but you would not expect a world record that had just been smashed to [ ... ]
athletics
Walker The Talker: Olympic Games Has The Power To Inspire Like...
It’s the only question I keep getting asked at the school gate. “Will you be going to the [ ... ]
athletics
Gatlin And Fraser-Pryce Among The Star Names At Friday's Doha...
The Diamond League meet in Doha takes place today and there are some thrilling match-ups for us to look [ ... ]