Step aside, fellas. The women are here to show you how it’s done.

For years now, the men’s 100m final has been the most anticipated race of any Olympic Games, and with good reason. Before the days of Usain Bolt dominating on the sprint scene, athletics fans were treated to some captivating rivalries between Ben Johnson and Carl Lewis in 1988, Maurice Greene and Ato Boldon at the turn of the millennium, and even Linford Christie making history for Team GB in 1992 by becoming the oldest 100m Olympic champion at the ripe age of 32.

In the Bolt era, rivalries were less prominent, at least in the sprint for gold. The likes of Tyson Gay, Justin Gatlin, Yohan Blake and Asafa Powell all ‘enjoyed’ stints of battling to be the best of the rest, but the race to claim the silver medal behind Bolt just doesn’t have the same appeal. The Jamaican has since retired leaving the 9.58 seconds he set in 2009 as the time to beat for today’s crop.

Andre De Grasse ran a hugely impressive wind assisted 9.69 back in 2017, with the likes of Trayvon Bromell, Zharnel Hughes and indeed Gatlin fighting for supremacy on the track. While the spectacle of the men’s 100m race will always attract viewers, this year comes with the hope of a classic encounter, as opposed to the expectancy of years gone by.

The exact opposite is true of the women’s race.

It is as wide open as any sprint race in recent memory, with as many as six athletes heading into the 2020 Tokyo Olympics with genuine medal claims. With the start of the Games now just one week away, excitement is building ahead of what promises to be yet another fascinating show of the best talent on the planet.

Quite rightly, the women’s 100m race is the one that has got people talking. 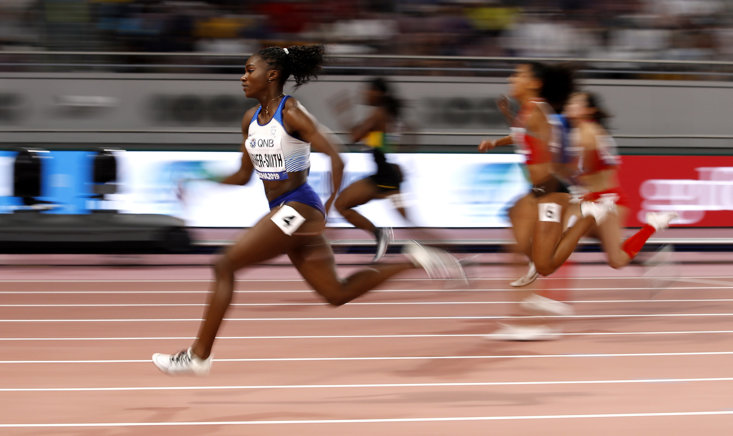 Dina Asher-Smith is expected to become the first Team GB woman to reach the final since Jeanette Kwakye in 2008, but will be confident of doing much more than simply making up the numbers.

The 200m world champion has every chance of finding herself on the podium at the shorter distance, and although the 25-year-old has only managed the 10th-fastest time of the calendar year, she is yet to lose a race and flexed her big-race muscles when comfortably beating Olympic gold favourite Shelly-Ann Fraser-Pryce back in May.

Despite her recent two-year break after giving birth to her son, Fraser-Pryce arguably remains the one to beat with 2008 and 2012 Olympic golds to boast of in this race. She also has run the quickest 100m this season with a staggering time of 10.63, and looks best placed to take advantage of Sha’Carri Richardson’s absence.

Fellow Jamaican Elaine Thompson-Herah has herself clocked a time of 10.71 as recently as June, and will fancy her chances of upsetting her compatriot on the biggest stage of all.

Shericka Jackson makes up the Jamaican trio expected to make a serious impression in the final on the last day of July, with the 27-year-old joining the aforementioned pair in running under 10.80 this season.

The lack of crowds at recent events appears to have made no difference in terms of times recorded, with Nigerian Blessing Okagbare and Ivory Coast star Marie-Josee Ta Lou all looking to join Asher-Smith in gate-crashing the Jamaican party. Both have clocked quicker times than the Brit this season, and if the London sprinter is capable of competing for gold, then so are they.

With the women’s 100m showpiece headlining a Sunday session that includes the completion of the men’s discus final as well as the 4x400m mixed relay final, we are sure to be in for a fascinating day of action.

Can Asher-Smith become the first woman in history to win Olympic Gold in the 100m? Or will the three Jamaicans dominate proceedings?

It is going to be a riveting 10 seconds as the watching world finds out.