A lot can happen in two days, but you would not expect a world record that had just been smashed to be beaten again. That is exactly what happened when Ethiopian runner Letesenbet Gidey broke the women’s 10,000-metre record just 48 hours after Sifan Hassan had set a new mark. And both historic runs happened on the same Hengelo track in the Netherlands for the Ethiopian Olympic trials.

Since the beginning of the super spikes era in athletics, there has been a flurry of world records broken and Gidey’s was the latest in a long line of outstanding performances that relied on the game-changing technology. The new footwear is said to have a great impact on athlete performance, and can improve them by half a second to a second per lap.

Even when Hassan set the world record on Sunday, Gidey looked confident. From around the halfway point in the race, she was recording laps of 72 seconds before smashing the final lap in a staggering 63 seconds, despite having to get through other runners. Her time was 29:01:03, shattering Hassan’s two-day-old record by more than five seconds.

Aided by the new technology, she was able to take off a remarkable 1 minute and 20.2 seconds off her time at the World Championships in Doha two years ago.

The 23-year-old said: “I expected to break a world record.”

“I’d like to try to break the world record again and break 29 minutes,” she said.

It was only last October when Gidey broke the 5,000-metre record.

The new advancements in shoe technology have led to all four men’s and women’s 5,000m and 10,000m world records being broken in the last 10 months. The shoes feature carbon plates and thick foam insoles, enabling athletes to make history. 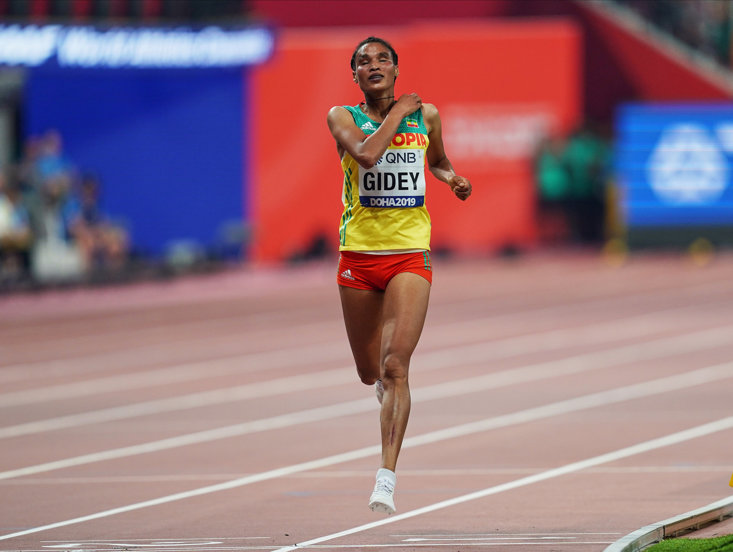 With the new shoe technology already making wavelengths on the track, there are only going to be more advancements which will likely mean the end of long-standing records, as Gidey has already proved.

To put it into context, between 1993 and 2016, no one ran within 20 seconds of the world record of 29:31 held by the Chinese athlete Wang Junxia, who was part of ‘Ma’s army’ and was later revealed as part of a state-sponsored doping regime by Chinese state media in 2016.

The new spikes are revolutionising athletics and we can already see the impact they are having on athlete performance and it begs the question, how long will it take for these world records to be beaten again?

While Gidey will be delighted with her accomplishments in the last year, she only has to look at what she has done this week to be concerned. She had broken Hassan’s record within two days of the Dutch-born runner taking it for her own. Gidey, and other record holders will be constantly looking over their shoulder now for their track rivals chasing their records because the new spike technology is able to turn their dreams into reality.