A freezing cold Saturday of sport was rounded off perfectly with late-night Athletics action across the Atlantic for the latest instalment of the 2021 World Indoor Tour.

The famous meet is usually held in Boston's Reggie Lewis Centre, but with the iconic venue currently being used as a vaccination site, some of the world's best found themselves in the excellent temporary home of the Ocean Breeze Athletic Complex on Staten Island in New York.

Tim Hutchings had the honour of calling a magnificent world record in the women's 1,500m at Tuesday's French meet. Last night the commentary baton passed to his LA Olympics teammate and good friend Steve Cram.

There was a blistering start with the women's 60m Hurdles, as outdoor world record holder Keni Harrison scorched to a world-leading 7.82. And a promising return to form this year continued for Great Britain's Tiff Porter, an excellent second place equalling her season's best of 7.89

The rarely-run 300m produced one of the fastest performances in history from the in-form 2018 NCAA 200m champion Gabby Thomas.

Irina Privalova's 35.45 world record dates back to 1993, before 24-year-old Thomas was even born, yet she roared to third on the all-time list with a magnificent 35.73. I wonder what progress she'll make over 400m outdoors this season with that kind of winter speed! 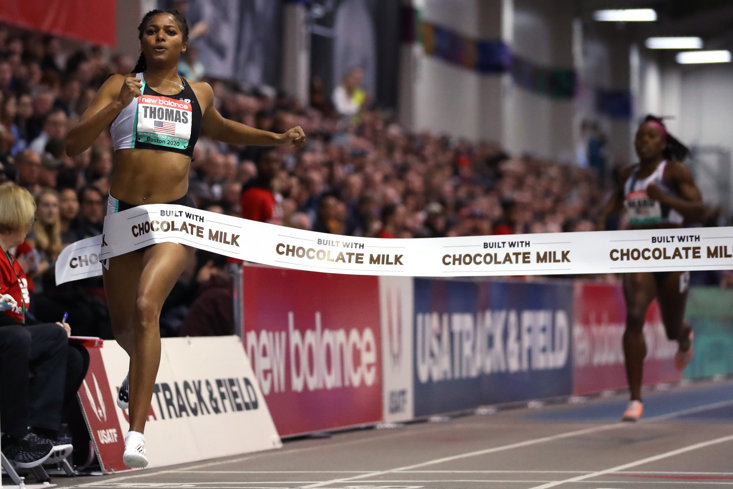 If the 300m was impressive, the women's 400m was even better. Olympic champion Shaunae Miller Uibo raced sparingly last year so there was great expectation ahead of her first outing of the season at this distance, and the Bahamian did not disappoint.

We knew she was in good shape after a 22.40 national indoor record over 200m at the end of last month and she started with intent in New York. Her first lap produced an unofficial split of 21.92, and she finished just a shade outside 50 seconds for a new national record and a place in the top 10 all-time list. She has started her year with a bang over both her sprint distances!

In the two short sprints, American Trayvon Bromell recovered from a slow start to power his way through to take the men's 60m in 6.50, while in the women's race, favourite Aleia Hobbs was disqualified after twitching in the blocks, so Kayla White took advantage for victory from lane two in 7.15.

With so many global sprint stars in action on Staten Island, it was easy to forget the quality of the line-ups were also truly world class for the longer track races.

Records galore came tumbling down in the women's two-mile race. After a 4.41 opening mile, the platform had been laid for a series of big personal bests and national records throughout the field.

American Elle Purrier showed great strength to finish in 9.10.28 for third on the all-time list behind the brilliant Ethiopian duo of Genzebe Dibaba and Meseret Defar.

Steeplechaser Emma Coburn had a fine run for second, and there were national records for Canada's Julie-Anne Staehli in third, and Great Britain's Amy Eloise Markovc in seventh, her 9.30.69 eclipsing Jo Pavey's mark of 9.32 set back in 2007.

Colorado-based Australian Oliver Hoare overhauled European and Commonwealth medalist Jake Wightman on the last lap of a very high quality men's 1,500m. His 3.32.35 was a personal best, indoors and out, and a national record, a clear step up in class that many have been predicting for a while.

Wightman hung on for second and only just missed out on Peter Elliot's British record from 1990. His 3.34.48 indoor PB was a fine run nonetheless. 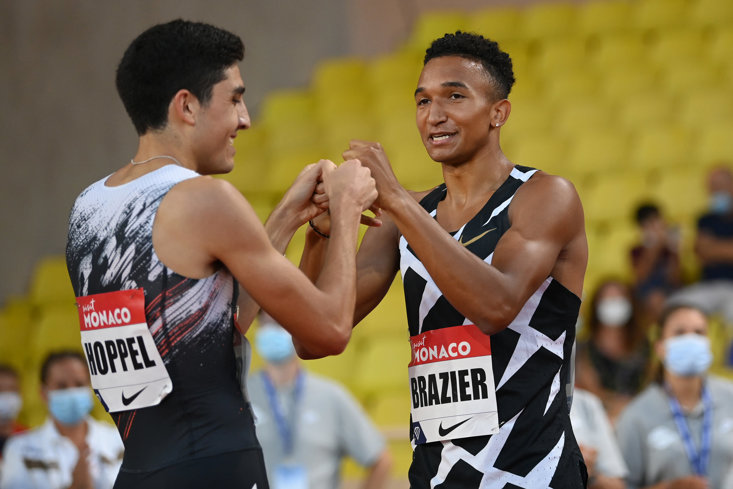 Talented American teammates and rivals Bryce Hoppel and Donavan Brazier won the men's 1,000m and 800m respectively, both producing North American records. Great Britain's Charlie Grice ran a national record for third behind Hoppel over the longer event, while Brazier in particular looked really sharp over the 800m, taking one hundredth of a second off his own record for 1.44.21. Great Britain's Jamie Webb was rewarded with a lifetime best of 1.46.26 in second.

Ajee Wilson made it an American double over the four-lap indoor event with a sub 2.02 victory, while Great Britain's Isabelle Boffey almost found a way through on the inside round the final bend. She hung on for third with a big PB of 2.02.45, a very encouraging performance so early in the year.

All in all a hugely successful evening for meet organiser Mark Wetmore, who saved the biggest sprint names for last with the men's 200m and 400m rounding off a thoroughly enjoyable night in New York. 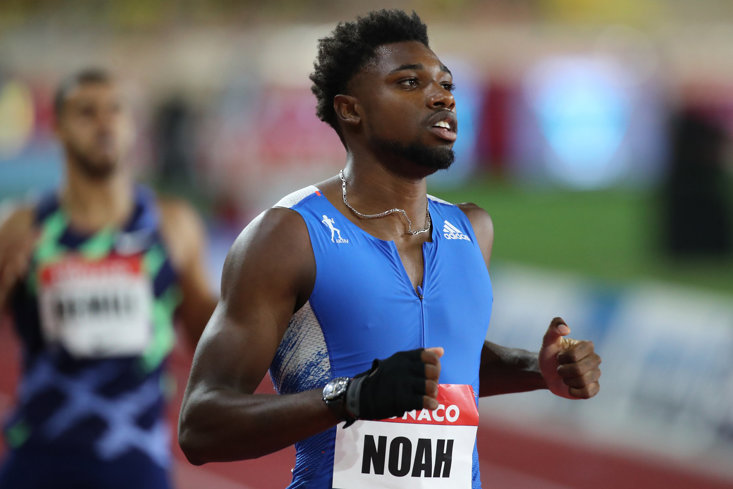 Reigning 200m world champion Noah Lyles had warmed up for the penultimate event with a solid 6.76 in the heats of the men's 60m, yet by his own very high standards he looked underwhelmed with both performance and time over his favoured distance.

He took the win in 20.80 but was made to work for it over the final 50m. No need for alarm bells yet though, he is arguably the sport's biggest showman since the retirement of Usain Bolt and there's a long way to go before he needs to hit his peak in 2021.

So it was up to good friends Rai Benjamin and Michael Norman to finish with a flourish over the 400m. And they did! No one has ever run quicker than Norman indoors over 400m, whilst Benjamin is joint-third on the all-time list over the 400m Hurdles. A fascinating battle ensued.

Side by side round the last bend, Norman continued his unbeaten streak against his teammate, winning in 45.34, but Benjamin will take great confidence from finishing just five one-hundredths of a second behind his housemate. There’s plenty more to come from those two this year, you suspect.

It was a fitting end to an excellent night in New York.....The Tour returns to Europe on Wednesday for a high-quality meet in Torun, Poland.

x
Suggested Searches:
Tyson Fury
Manchester United
Marcus Rashford
Lewis Hamilton
F1
Air Jordan
More
athletics
Walker The Talker: Holloway Breaks Colin Jackson's 27-Year-Old...
The Curtain came down on the World Indoor Tour in spectacular fashion last night at the Villa De [ ... ]
athletics
Walker The Talker: Eliud Kipchoge's The Star Attraction At Hamburg...
The greatest is back. That's the headline this morning from NN Running, the Dutch Sports agency [ ... ]
athletics
Walker The Talker: Giles Records Second Fastest Indoor 800m...
So far this spring we've had some brilliant action and times on the World Indoor Athletics tour [ ... ]
athletics
Walker The Talker: World Indoor Tour Action Builds Anticipation...
With so much uncertainty still surrounding Tokyo this summer, what a relief it's been for Athletics [ ... ]
athletics
Our Guide To Surviving The Day After The London Marathon
From the cardboard cutouts of the Queen across a special course around St James’ Park to the 45,000 [ ... ]
athletics
The Real Running Podcast - Infotainment And Inspiration For...
The consequence of our reactions to the pandemic has had the slitheriest of slithers of silver linings. [ ... ]
athletics
The Olympic Podcast Special Celebrating Daley Thompson's Glory...
For Olympic enthusiasts of a certain age, prepare to feel very old. This year marks forty years since [ ... ]
athletics
When Jesse Owens Stole The Spotlight From Hitler At The 1936...
Since assuming the role of Chancellor of Germany in 1933, Adolf Hitler had earmarked the 1936 Summer [ ... ]
athletics
Get The Most From Your Training With These Five Incredible Running...
There’s no question that thanks to a technological boom, the running experience has never been [ ... ]
athletics
Visa Sponsorship Renewal Gives Olympics Welcome Boost In Uncertain...
Visa have extended their sponsorship of Olympic athletes until 2021, after this summer’s games [ ... ]
athletics
How Marathon Runners Can Stay Focused And Feeling Good During...
There are many of us who should have been making our final preparations for a marathon right now. With [ ... ]
athletics
Team GB's Tom Bosworth May Not Travel To Olympics Over Coronavirus...
Team GB’s top racewalker Tom Bosworth may not travel to the Olympic Games this summer, if we do [ ... ]
athletics
Gender Balance Is A Reality At Tokyo 2020 Thanks To Flag-Bearer...
The Olympics Opening Ceremony is one of the most iconic events on the planet. Every country’s [ ... ]
athletics
Five Tokyo 2020 Stars Who Will Be Surfing, Skating And Climbing...
157 days. That is all that is left between today and the opening ceremony at the Tokyo Olympics, the [ ... ]
athletics
Dina Asher-Smith Will Welcome Fraser-Pryce's Decision To Do...
The stage is set. The gauntlet has been laid down. In Tokyo, Team GB’s Dina Asher-Smith will be [ ... ]
athletics
Book Review: The Runner By Markus Torgeby
As the publishing industry is the envy of the Premier League, in that it takes a midwinter break and [ ... ]
athletics
The Exo-Skeleton Suit That's Helping Smash Limitations And Break...
With all the criticism surrounding VAR in football at the moment, it is important to take a moment to [ ... ]
athletics
The Running Trainers So Good They Could Be Banned By World Athletics
Ever heard of the running trainer that made athletes too quick? Nike’s record-breaking running [ ... ]
athletics
Taking The Knee & Hand Gestures Banned From ''Politically Neutral''...
More than half a century after Tommie Smith and John Carlos created one of the most prevailing, [ ... ]
athletics
Alistair Brownlee Sets His Sights On A Tokyo 2020 Triathlon...
The lure of Tokyo 2020 is just too much for Alistair Brownlee, who has said he aims to compete at this [ ... ]
athletics
With Lessons In Hygiene And Hydration, Team GB Targets Medal...
UK Sport are hopeful that the 2020 Olympics in Tokyo will be the most successful of all time for Team [ ... ]
athletics
Paris Olympics 2024: Surf’s Up...10,000 Miles Down The Road,...
Excited for Tokyo 2020 yet? Well before we dive headfirst into athletics action in Japan there’s [ ... ]
athletics
Coaching US Runner Jordan Hasay Is The Next Chapter For Paula...
Paula Radcliffe is remembered for many things, being a world record holder, crouching to relieve [ ... ]
athletics
Nick Butter Becomes First Person To Run 196 Marathons In 196...
The Sportsman’s favourite marathon man Nick Butter has completed his incredible target of running [ ... ]
athletics
Groundbreaking Gene Testing Could Spell The End Of Doping In...
Doping has long been the scourge of sport. Some of the most high-profile names have been found [ ... ]
athletics
Top Athletes Left In Shock As 200m Is Cut From Diamond League...
The Diamond League has announced that the 200m will be one of four events cut from its core events in [ ... ]
athletics
Hand Washing And The Marginal Gains Helping Team GB Succeed...
Hygiene will be a key component as Team GB look for marginal gains at Tokyo 2020. It may sound a little [ ... ]
athletics
Nothing Left To Chance As Eliud Kipchoge Attempts First Two-Hour...
This weekend, the fastest marathon runner ever will attempt to record an athletic achievement that will [ ... ]
athletics
Five Things We Learned From The World Athletics Championships
The controversy-stricken World Athletics Championships came to a close on Sunday evening with Great [ ... ]
athletics
Katarina Johnson-Thompson's Journey from Imposter Syndrome To...
Prior to this year, the World Athletics Championships has consisted of tears, despair and heartbreak [ ... ]